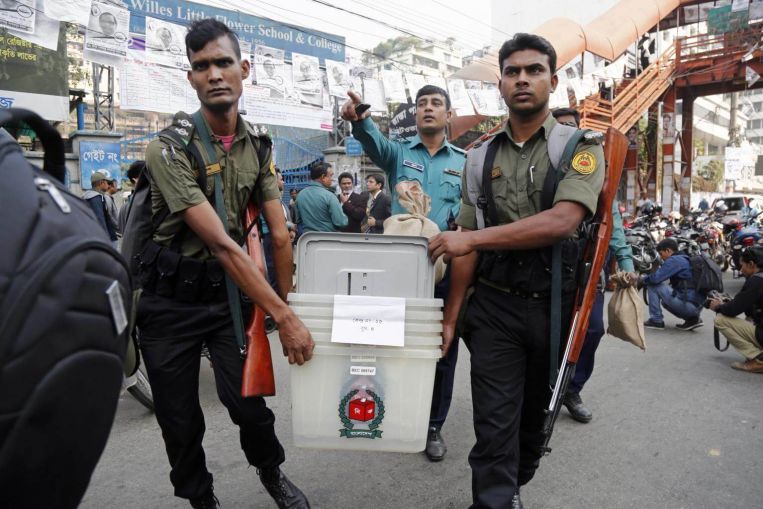 DHAKA (AFP, REUTERS) – Polls closed in a Bangladesh general election on Sunday (Dec 30) that was marred by the deaths of at least 12 people in vote-related clashes.

Voting ended at 4pm (1000 GMT) in the election which Prime Minister Sheikh Hasina is expected to win but has been overshadowed by a crackdown on opposition activists.

Meanwhile, the country’s Election Commission is investigating allegations of vote rigging coming from across the country, a spokesman told Reuters minutes before polling was to close.

“Allegations are coming from across the country and those are under investigation,” S.M. Asaduzzaman said. “If we get any confirmation from our own channels then measures will be taken as per rules”.

Polls opened at at 8am (10am Singapore) amid tight security following a campaign that was marred by violence and allegations of a government crackdown on opposition activists.

Some 600,000 security personnel are deployed across the South Asian nation, including at 40,000 polling stations where voters will cast their ballots in the country’s 11th parliamentary election since independence in 1971.

There was fresh violence on the eve of the vote. One man died when police opened fire on opposition activists who they say had attacked a polling station in the southern town of Bashkhali.

The deaths brought to six the number of people confirmed by police to have died in violence related to Sunday’s election. The main opposition Bangladesh Nationalist Party (BNP) claims eight of its activists have died.

The 104 million eligible voters must choose between an alliance led by Hasina’s ruling Awami League party and a coalition headed by the BNP which was cobbled together only three months ago.

Opinion polls show Hasina, who has presided over impressive economic growth during an unbroken decade in power but who is also accused of growing authoritarianism, heading for a comfortable victory.

She needs 151 seats in the first-past-the-post system to win in the 300-seat Parliament but experts say any victory would be sullied by accusations that she hamstrung her opponents’ campaign.

The opposition says nearly 15,000 of its activists have been arrested since the timetable for the election was announced on Nov 8, crippling its ability to mobilise its grassroots support.

Human Rights Watch and other international groups have decried the crackdown, saying it has created a climate of fear which could prevent supporters of opposition parties from casting their ballots.

Pandemic antibiotics surge will cause more deaths: WHO