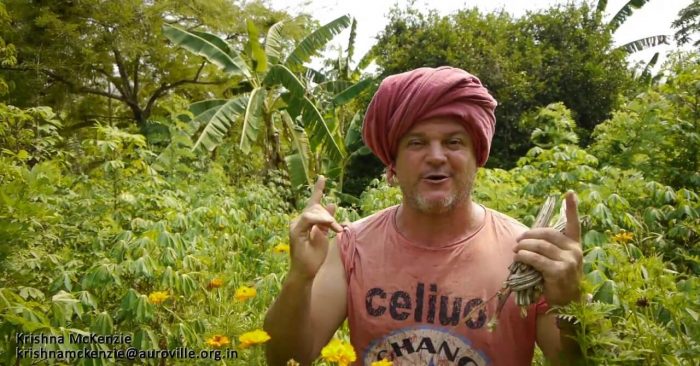 According to times now, Krishna McKenzie is a degree holder in acting, music, biology, French and jazz guitar from J Krishnamurti School in UK. He shifted to Auroville in the year 1993 the age of 19.

He selected his career as farming when his friends planned to study in US.

Krishna says he is ‘Iyarkai vivasayi’ meaning organic farmer with natural resources. His love towards Tamil culture made him marry a girl from Tamil Nadu and settled with her in Auroville, Puducherry. Krishna’s wife Deepa is a native from Thiruvannamalai. He loves her wife just as much as he loves farming and this lovely couple has two children.

This isn’t solely because of the amazing music he composes for his YouTube channel or the band he belongs to (which has travelled the country and the UK for gigs) or even the fact that he is an England native who speaks fluent Tamil.

It is because of the revolution he has started with natural farming.

Krishna’s earliest exposure to farming was in college when he helped run the Victorian vegetable garden at Krishnamurti School.

He refers to himself as a Iyarkai vivasayi (organic farmer) who follows his guru, Masanobu Fukuoka. The man behind the ‘One Straw Revolution’, a zen master and farmer who is celebrated for being a proponent of ‘natural farming’ or ‘do-nothing farming’.

Krishna reiterates the words of the visionary saying, “Nature is perfect, you cannot do anything to improve it. And so, natural farming is non-interventional.”