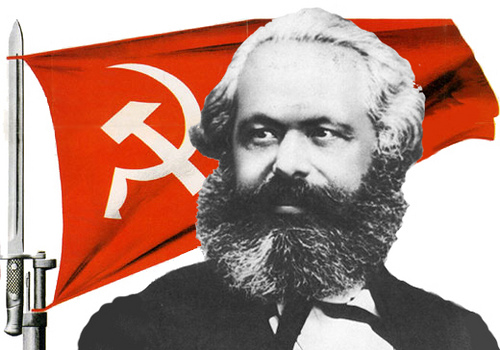 ReutersLONDON (Reuters) — A memorial to Karl Marx at the cemetery in north London where the 19th century political philosopher is buried has been defaced, with marble hacked away apparently by a vandal armed with a hammer.

The monument, which is among British structures listed to be of exceptional historical interest, appeared to have been attacked in the last few days, the Friends of Highgate Cemetery Trust said Tuesday.

Photographs from the scene showed chips and scratches to the marble gravestone, damaging epitaphs to Marx, his wife and grandson.

“Karl Marx’s memorial has been vandalized!” the trust said on Twitter. “It looks like someone has had a go at it with a hammer. It’s a Grade I-listed monument; this is no way to treat our heritage. We will repair as far as possible.”

The German revolutionary socialist, author of “Das Kapital” and co-author of the “Communist Manifesto,” lived in London from 1849 until his death in 1883.

His memorial has been attacked in the past with paint, and in 1970 an attempt was made to destroy it with a bomb. Police said Tuesday they had been called after reports of criminal damage in the cemetery.

“Initial enquiries have been completed and at this stage the investigation has been closed,” they said in a statement. “If any further information comes to light, this will be investigated accordingly.”

The incident was the latest attack on memorials of historic interest in London in recent weeks. Paint was splashed on a statue of wartime Prime Minister Winston Churchill last month and on a sculpture commemorating the Royal Air Force’s Bomber Command in London’s Green Park.

Karl Marx's memorial has been vandalised! It looks like someone has had a go at it with a hammer. It's a Grade I-listed monument; this is no way to treat our heritage. @MarxLibrary @HeritageCrime We will repair as far as possible. pic.twitter.com/6nY2TJOjw7