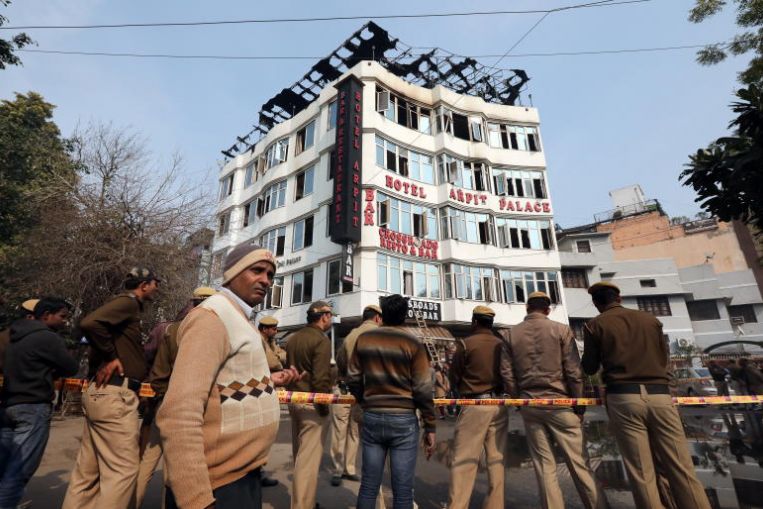 NEW DELHI (AFP) – At least 17 people died when a fire ripped through a budget hotel in Delhi on Tuesday (Feb 12), with victims including a woman and a child who reportedly jumped from a window to escape the blaze.

Images showed thick smoke and flames billowing out of the top floor of the Hotel Arpit Palace in a congested part of the Indian capital.

Guests at the hotel, popular with budget and business travellers, were unable to use corridors to escape because of wooden panelling, according to a fire officer.

Most of the residents were sleeping at the time the fire broke out in the early hours of Tuesday. It is estimated some 120 people were inside the building, built around 25 years ago, according to the hotel’s website.

“We have confirmed with hospital authorities, the toll is now 17 including a child,” Sunil Choudhary, a senior fire brigade official, told AFP.

G.C. Misra, Delhi fire services director, said the blaze had been brought under control and that 35 people were rescued by firefighters in an operation lasting several hours involving at least 25 fire engines.

“There was wooden panelling on corridors because of which people could not use corridors to evacuate,” another fire officer told reporters.

Police said they were investigating the cause, and a judicial probe has been ordered into the latest disaster to raise concerns over fire safety in India.

The hotel is in the Karol Bagh district, a busy commercial centre criss-crossed by narrow alleys where electric wires dangle overhead.

The area, which houses hundreds of hotels, shops and offices, is packed with tourists and shoppers.

Fires are common across India because of poor safety standards and lax enforcement of regulations.

Activists say builders and landlords often cut corners on safety to save costs and have accused civic authorities of negligence and apathy.

“Buildings can only be constructed up to four floors in Delhi,” Delhi’s home minister Satyendra Jain told NDTV.

“This hotel had been built up to six floors. It’s gross negligence on the part of the officers who allowed the extra floors to be built.

“The entire hotel has wooden panelling, this shows carelessness on the part of the owner.” Prime Minister Narendra Modi said he was “deeply saddened” by the loss of life in a statement posted on Twitter.

Fire disasters are particularly frequent in Mumbai, India’s financial capital where millions live in cramped and dilapidated properties because of high rents.

In 2017, 14 people were killed, also in Mumbai, when a huge blaze tore through a popular restaurant.