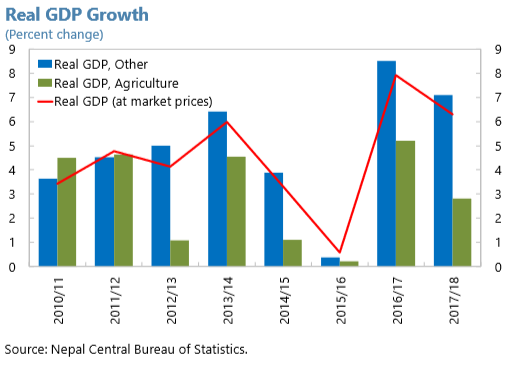 Gross domestic product (GDP)of Nepal  is estimated to have expanded by 6.3 per cent in Fiscal Year (FY) 2017/18 (mid-July 2017 to mid-July 2018), and headline inflation has averaged 4.2 per cent, held down by subdued food-price inflation.  The press release issued by International Monetary Fund (IMF) has highlighted  that Nepal’s economy is enjoying a solid expansion, supported by ongoing reconstruction activity following the 2015 earthquakes and increased growth in manufacturing and tourism-related sectors.

The Executive Board of the IMF on February 8, concluded the Article IV consultation with Nepa. Under Article IV of the IMF’s Articles of Agreement, the IMF holds bilateral discussions with members, usually every year. A staff team visits the country, collects economic and financial information, and discusses with officials the country’s economic developments and policies. On return to headquarters, the staff prepares a report, which forms the basis for discussion by the Executive Board.

Likewise, the government expenditure has increased by 32.4 per cent (year-on-year) in FY 2017/18, propelled by Nepal’s transition to fiscal federalism and ongoing reconstruction spending. As in previous years, spending was concentrated in the last quarter of the fiscal year. Revenue growth was also substantial (18.9 per cent). Nevertheless, the fiscal deficit increased to 6.5 per cent of GDP, from 3.1 per cent of GDP in FY 2016/17.