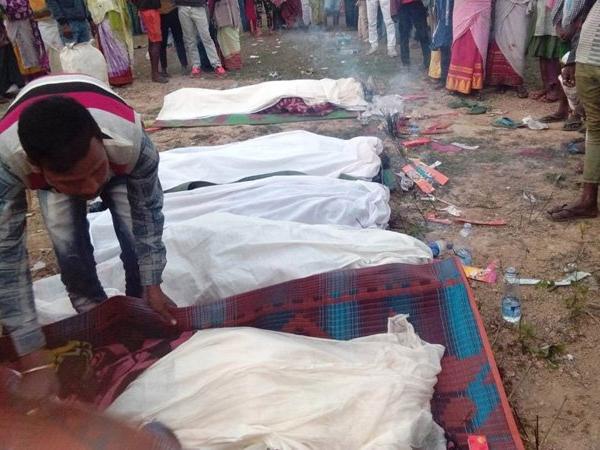 PTI : The toll in the Assam hooch tragedy increased to 100 on Saturday while over 310 others were undergoing treatment in hospitals.

So far, 45 people have died in Jorhat Medical College Hospital, where 221 who were taken ill after drinking spurious liquor have been admitted, the health minister’s office said.

Another 35 have succumbed in Golaghat civil hospital where 93 have been admitted, it said.

The tragedy had struck the tea gardens of the twin districts of Golaghat and Jorhat after a large number of their workers consumed the spurious liquor on Thursday night.

Assam Health Minister Himanta Biswa Sarma, who visited the patients in the two hospitals Saturday, told reporters, “This morning the toll in (the hooch tragedy) in Golaghat and Jorhat districts was 59 and 200 were admitted in hospitals. The death toll and the number of people admitted is changing minute to minute”.

“In Jorhat Medical College Hospital 36 of those admitted in connection with the spurious liquor tragedy are women. More patients were admitted when I was here”, he said.

Besides, the director of medical education Anup Barman, directors of Health, Assam and the National Rural Health Mission will be stationed in Jorhat to supervise and co-ordinate the services being provided to the patients, the minister said.

Considering the situation in Jorhat vis a vis the hooch tragedy, hospital authorities have been asked to restrict the number of patients admitted with other complaints so that maximum number of those who were taken ill after drinking spurious liquor can be accommodated there.

Hospital authorities have also been instructed to provide food for the attendants of the hooch victims, besides the mandatory health care facilities and medicines.

Asked if spurious liquor is still being sold in view of the fresh cases being reported, Sarma said “Patients who had developed complications two-three days ago are coming now. Some who had consumed liquor earlier are coming for treatment after hearing the news of the hooch tragedy out of fear. These people are psychologically in shock and so they think they are ill.”

Assam Chief Minister Sarbananda Sonowal on Friday ordered an inquiry into the incident by Upper Assam division commissioner who has been asked to submit the report in a month, he said.

To queries on how the incident occurred, Sarma said it will be come to light once the inquiry is conducted.

State Excise Minister Parimal Suklabaidya directed a team of department officials to conduct an inquiry into the incident.