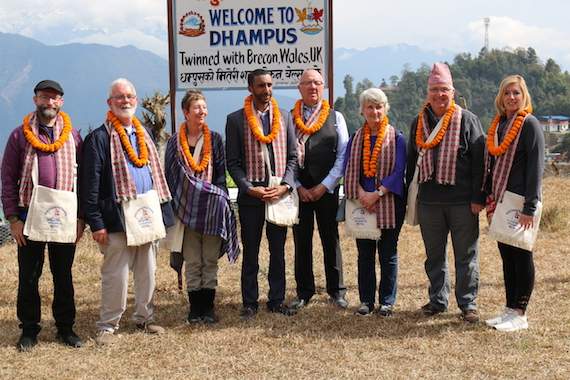 Cllr Mathias said: “They welcomed us with open arms. They gave us a gift which is this lovely painting. We were all very impressed.”

Ms Williams revealed that everybody who went on the trip to Dhampus had paid for their own travel and that the town council had not paid towards the twinning trip.

Cllr Trailor, Cllr Mathias and Ms Williams made an effort to learn Nepalese before the twinning trip to enable them to hold a basic conversation with their hosts.

Cllr Mathias said: “Once we’d decided on the twinning, we decided to learn some of the language so we could communicate while we were there. It was quite useful and we had an amazing response. We could hold a basic conversation comfortably.”

The deputy mayor spoke some Nepalese on a local TV news station while Cllr Trailor said a few words during the twinning ceremony.

They funded sports kits for the schools and brought party bags with gifts for the children at the orphanages such as small toys.

While in Nepal the group, who also visited Kathmandu and Pokhara, also took compact water filtration systems called Life Straws which will give a family clean drinking water for four years.

Funded by Brecon’s Rotary Club, each member of the group took a life straw to Nepal in their luggage.

Cllr Trailor said: “It was an honour to represent the town of Brecon on this historic occasion in Dhampus. The welcome that we received was truly humbling and fitting of the connection that the two communities already have and those that will be forged in future years.

“I would like to encourage everyone to join us for the Gurkha parade and our twinning celebration in Brecon in June when we will show the people of Dhampus what a wonderful town Brecon is.”

The town council also gave gifts to Dhampus including a plaque with the Brecon Town Council crest, town council scarves and ties, and two framed photos of Pen y Fan showing it in winter and in summer.

Cllr Meredith said: “The welcome that we received in Dhampus was tremendous and it was evident how much the twinning meant to them. We now look forward to cementing our links as the twinning develops.

“I am also supporting the Visit Nepal 2020 promotions under way with the Government and Tourism Department of Nepal, which are working towards increasing travel and tourism to Nepal.

“There will be a promotional hike in the Brecon Beacons during the first weekend of August this year and I encourage and welcome as much local participation as possible.”

Brecon’s twinning ceremony will be held on June 9 and another visit to Dhampus is planned for 2020.

Here is some Nepalese coverage on the twinning – Cllr Mathias can be seen speaking in Nepalese around 10 minutes and 40 seconds into the video.