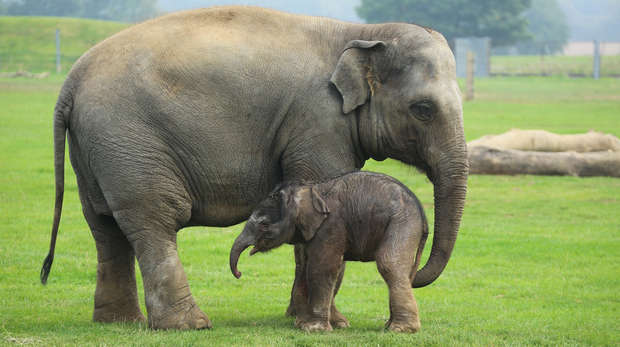 AsianScientist : An international team of scientists predicts that climate change and human activity will result in major losses to the natural habitats of Asian elephants by 2070. Their findings are published in the journal Diversity and Distributions.

Protecting and expanding suitable habitats for wildlife is key to the conservation of endangered species such as the Asian elephant. The final bastions of Asian elephant habitat are in India, Nepal and Myanmar, and as these countries urbanize, the survival of the remaining elephants is expected to come under threat. In the present study, researchers from Spain, India, Nepal, Myanmar, Italy and Germany worked together to assess the combined effects of human pressures and climate change on the distribution of Asian elephants embedded in the human-dominated landscapes in India and Nepal.

“We compiled a large database of more than 4,000 elephant occurrences and a large geodatabase of environmental predictor variables covering India and Nepal for this study,” said Dr. Surendra P. Goyal of the Wildlife Institute of India, a co-author of the paper. The team estimated that around 256 thousand square kilometers of habitat are suitable for elephants in India and Nepal.

They also predicted the current spatial distribution of Asian elephants as a function of environmental variables. In addition to ongoing human-induced disturbance, especially in the form of land-use change, the researchers observed that elephant distribution is influenced by complex local scale interactions among precipitation and temperature, complicated by seasonal monsoon in the region.

Next, the scientists included the effects of climate changes into their distribution model to predict future elephant distributions and possible range shifts, generating projections for the years 2050 and 2070. In a scenario where both climate change and land use change was modelled, the loss of habitat was as much as 42 percent. When only climate change is included, the loss of potential habitat is more moderate, but still substantial with a 17.1 percent loss in one scenario in 2070. However, the researchers forecast small gains in potential habitats for Asian elephants, particularly along the valleys in the Himalayan foothills.

“We anticipate that elephant range would likely shift towards higher elevations in the Himalayas, and along a gradient of water availability, instead of a simple unidirectional range shift towards higher elevations and latitudes typically expected when temperature is the principal factor,” explained Professor Miguel B. Araújo of the National Museum of Natural Sciences in Madrid, Spain, who is a collaborator on the study.

The results of this study have important implications for conservation efforts as the suitability maps and future projections can be effectively used to identify critical habitat areas requiring immediate conservation attempts. Furthermore the projections can inspire adjustments to current habitat protection strategies, said the researchers.

The article can be found at: Kanagaraj et al. (2019) Predicting Range Shifts of Asian Elephants Under Global Change.