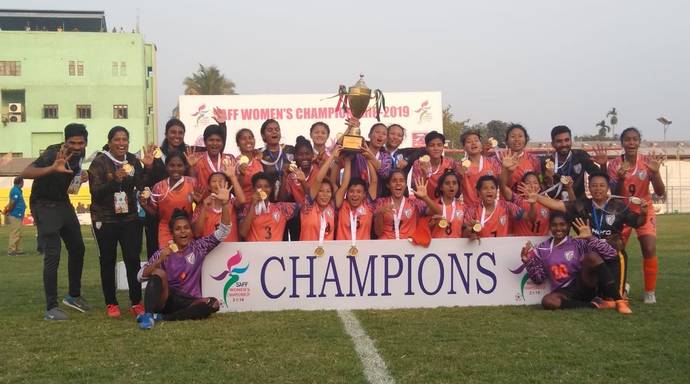 Biratnagar: The Indian women’s team has successfully defended its SAFF Women’s Championship title for the fifth time in a row with a 3-1 win over Nepal on Friday at the Sahid Rangashala Stadium in Biratnagar, Nepal.

Dalima Chhibber opened the scoring for India in the first half, with Dangmei Grace and Anju Tamang finding the net in the second half after Sabitra Bhandari got the equaliser for Nepal in the first half. The win extends India’s unbeaten run in the tournament’s history to 23 games.

The host nation started on the front foot, seeing most of the ball in the opening minutes much to the delight of the packed stands. Nepal almost took the lead in the 10th minute when it put the ball in the back of the net but the goal was flagged offside.

The opening goal came against the run of play in the 26th minute. Dangmei Grace won a free-kick after she was fouled about 40 yards from the goal. Dalima took the set piece and opened the scoring with a thumping strike that sailed into the left top corner.