Brunei is the latest country to announce the death penalty for gay sex. – South Asia Time 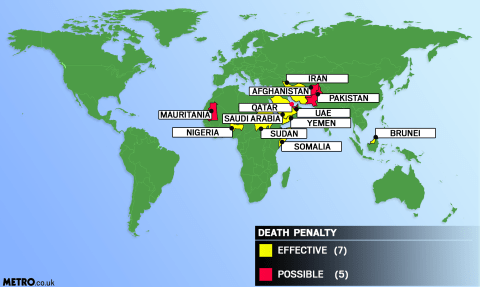 There are now 12 countries in the world where it is possible to be killed for having sex with someone of the same gender.

In total, homosexuality is also illegal in 70 nations, according to the International Lesbian, Gay, Bisexual, Trans and Intersex Association (ILGA)

From this week, Brunei will stone to death men who have sex with other men. Women face a penalty of 40 strokes of the cane and/or up to 10 years in jail for the same ‘crime.’

Homosexuality is also punishable by death in Afghanistan, Pakistan, the United Arab Emirates, Qatar and Mauritania.

It is not believed anyone has been killed for being gay in these countries but the deterrent is written in law and the penalty is possible.