Nepali calendar is the most inclusive calendar in the world, celebrating New Year today 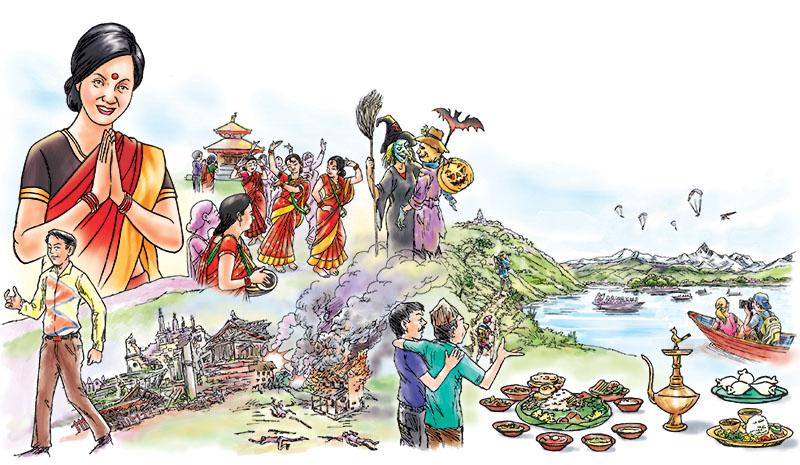 Nepal is celebrating its official  New Year  today.
The  official calendar of modern-day Nepal is called Bikram Sambat.
According to BS calendar the year 2075 has ended from yesterday and 2076 starts from today.
Bikram Sambat system  uses lunar months and solar sidereal year and is also called Nepali Patro.
Nepali Calendar is the multicultural Nepali Patro with Events and Festivals of all the cultural ethnic groups of Nepal.
Nepali Calendar follows detail Nepali panchang to list important festivals like Dashain, Tihar, Teej, Chhath, Lhosar, Eid etc useful for the Nepalese community in Nepal and Abroad .
The only one calendar in the world that has allocated holiday for all the ethnicity and religious festivals.
Nepal celebrates Eid , Christmas and Dashain and almost all the major festival of all the religion  as a national festival with a national holiday in its official calendar. Hence, Nepal is considered as one of the country with religious harmony and inclusive nation  in the world in present days.
The Nepalese new year falls on the 1st of Baishakh (mid of April).
Nepali calendar is approximately 56 years and 8½ months ahead of the gregorian calendar (A.D).
There are 12 months, but unlike the Gregorian calendar, it has varied dates on every month, as they are not easy pre-determined and changes from year to year.
The months have minimum of 28 (usually Mangshir/Poush) days and maximum of 32 (usually Asar/Shrawan) days.
Besides in Nepal this Nepali calendar is also used in other countries like India , Bangladesh, Sri Lanka, Thailand, Malaysia and Indonesia.
Some critics says it was invented by Birkaditya in ancient period in India but India was not India itself on that period. Secondly, the ancient facts says that the calendar was developed and followed by Buddhist and other various religious people in South Asian territory.
Being one of the virgin land and the oldest country in the map of South Asia and even in the world,  Nepal follows this BS calendar system,  which  means this calendar is entirely Nepali.  None of the countries in the world follow BS as the official Callander.  Hence, this is entirely Nepali calendar however  we can rename as a inclusive Nepali calendar (INC) or common calendar (CC) , says Rudra Dhakal, a  Nepalese journalist and socio-cultural analyst from Liverpool U.K.
This  calendar has been updated, upgraded and conserved in Nepal as per the political, cultural and socio economic change during the various span of time hence not only in Nepal it should be the example of inclusion in the entire world.
About the Calendar that most of the countries in the world follows toda :
The most widely used Gregorian calendar started by Pope Gregory XIIII which is said to be introduced in 1582 when Christ was Born.
The full form of AD means After the Death of Jesus also known as “Anno Domini” which means the “year of the lord”.
This calendar era is based on the traditionally reckoned year of the conception or birth of Jesus of Nazareth, with AD counting years from the start of this epoch, and BC denoting years before the start of the era.

There is no year zero in this scheme, so the year AD 1 immediately follows the year 1 BC. This dating system was devised in 525 by Dionysius Exiguus of Scythia Minor, but was not widely used until after 800.

The Gregorian calendar is the most widely used calendar in the world today. For decades, it has been the unofficial global standard, adopted in the pragmatic interests of international communication, transportation, and commercial integration, and recognized by international institutions such as the United Nations.