The event was initiated with opening remarks followed by cultural performance, business pitching, and networking session.

The key motto of the program was said to be promoting  Nepalese business, culture, and tourism. Facilitating business and entrepreneurship to invest in Nepal or to promote Nepalese products and services in the U.K. market as well as to support Nepalese economy and to support the wider vision of the Government of Nepal “Happy Nepali & Prosperous Nepal”,  Ambassador of Nepal to the U.K. , Dr. Durga Bahadur Subedi said in his opening remarks.  Welcoming all the guests and entrepreneurs, Dr. Subedi stressed on the full commitment of himself and his entire embassy team to support trade and investment related issues with the highest priority. 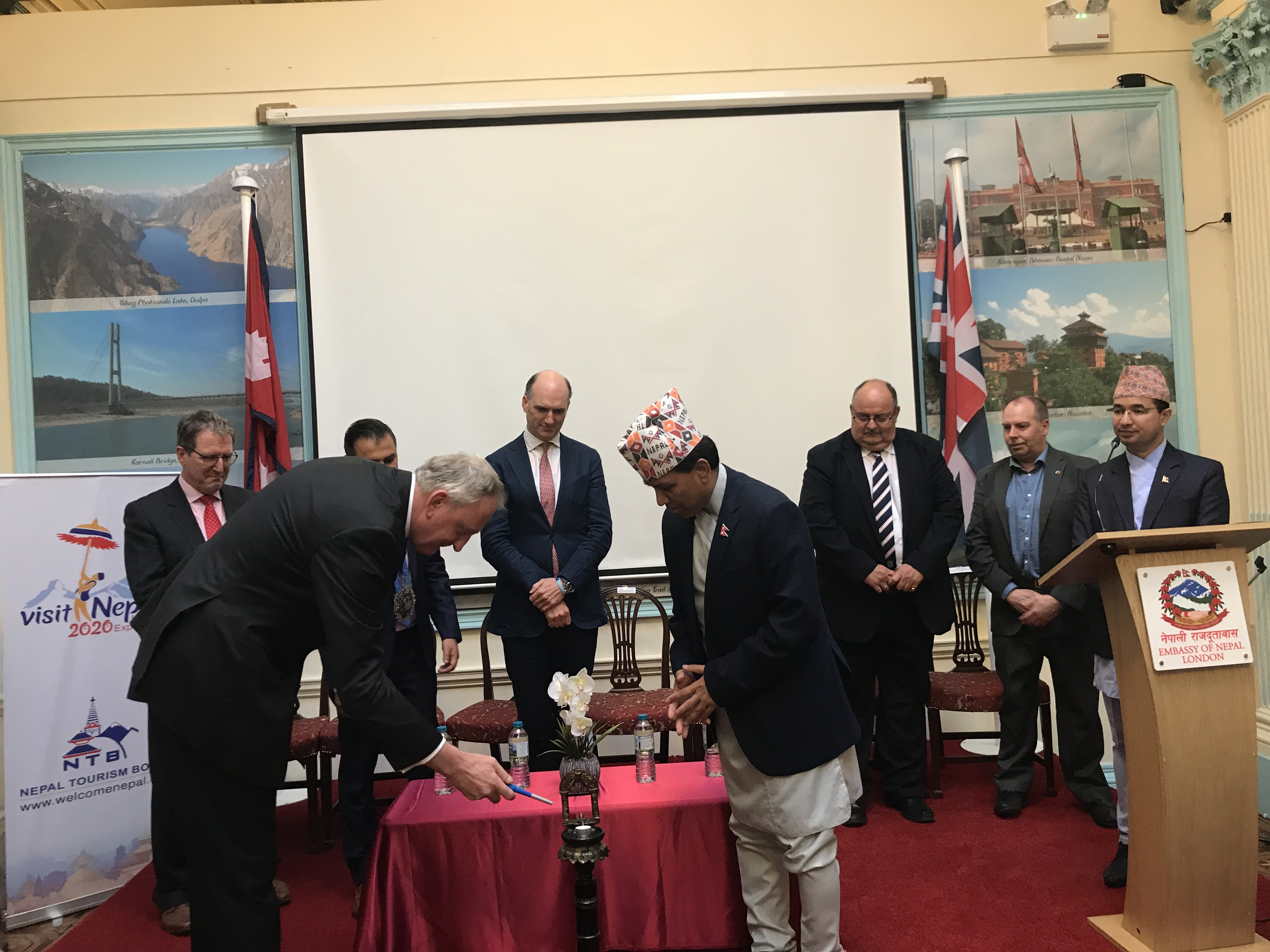 The chief guest of the program, Lord Mayor of the London, Mr. Piter Estlin stressed his full support and commitment to supporting the Nepalese community and helping to promote Nepalese products and services in the U.K. market.
He appreciated the effort of Gurkhas and entire Nepalese community in Britain and urged his fellow British citizens to visit Nepal to have real adventurous experience as he has been already visited Nepal twice and planning to visit again. He highlighted the Opportunities for investment on Hydropower, Infrastructures and waste management in Nepal for the British investors. Leader of Rushmoore borough council Cllr. David Clifford appreciated the contribution of the Nepalese community in the Aldershot area. He commended the multicultural dynamism and great value to the family and friends of the Nepalese community and thanked for making the local community active throughout various community events.
Likewise, the advisor of the foreign minister of Nepal, Mr. Sudan Gyawali mentioned governments plan and regulations to secure foreign investment in Nepal. He urged international investors to invest in Nepal without hesitation as there is less competition and more profit and opportunities to grow. 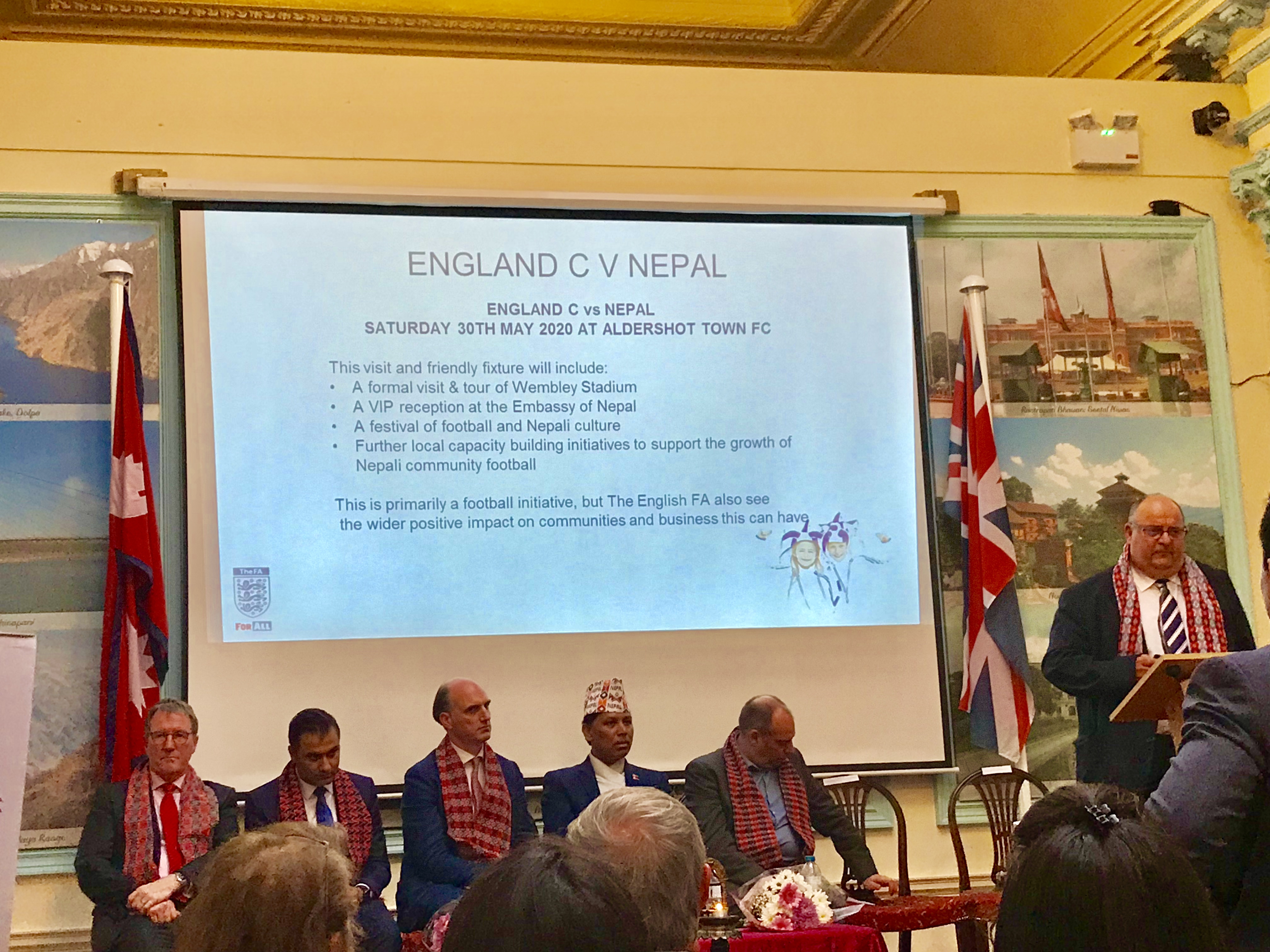 On the occasion of the conference,  the Head of English Football Association, National League system Mr. Lawrence C Johnson made a historic announce to support Nepalese football.  According to the announcement, Nepali National football team will play with England C on 30th May 2020,  at Aldershot football ground.  Similarly, the National team of Nepal will also visit Wembley stadium and a special reception will be provided to the team. Correspondingly the English team will also visit to Nepal to promote football culture and encourage the national team of Nepal. 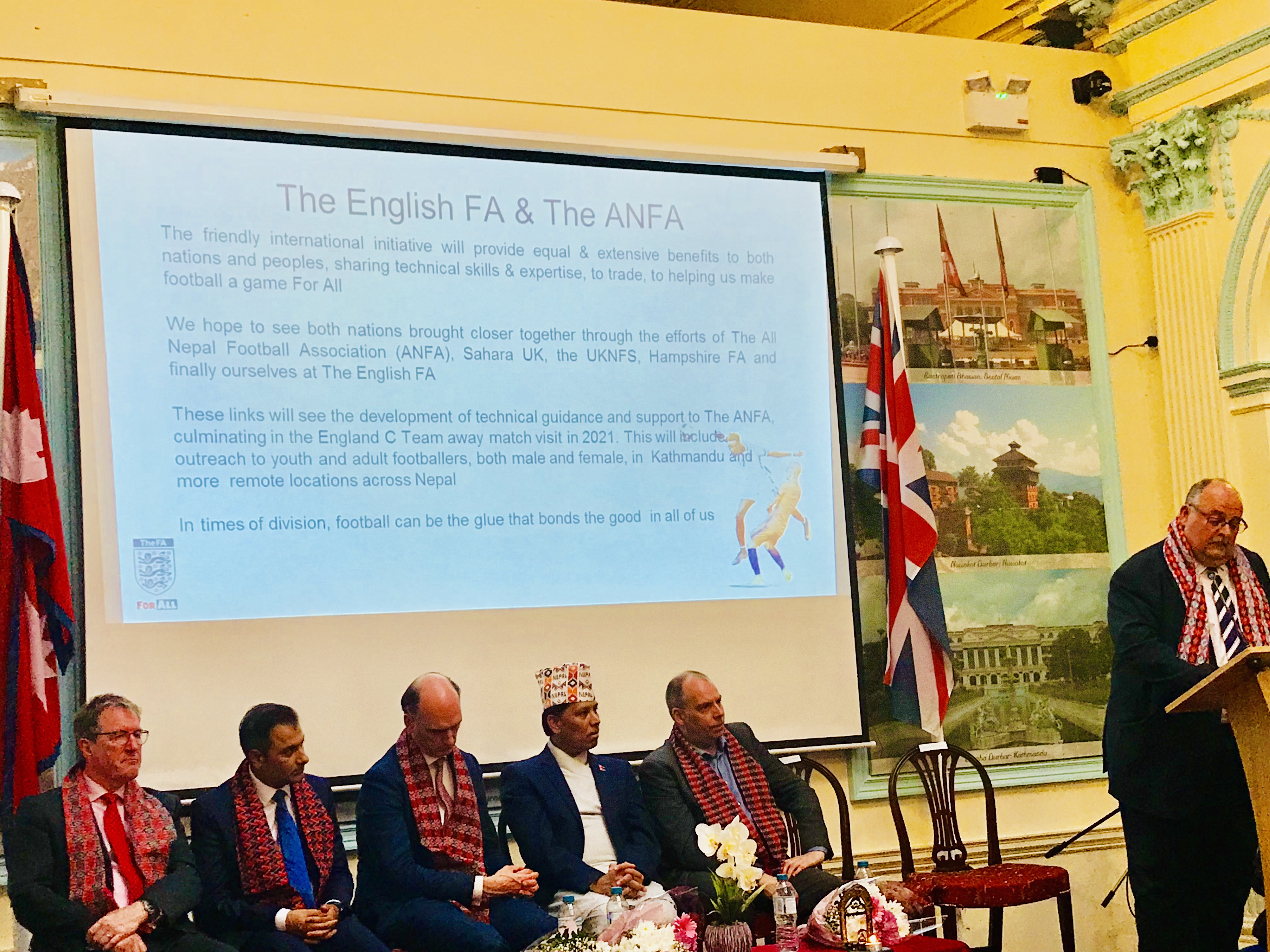 This friendly match and mutuel relationship has been set up between England and Nepal are happening the first time in the history of Nepal-Britain relationship.
Nepali cricket team has been already played twice in Lords. 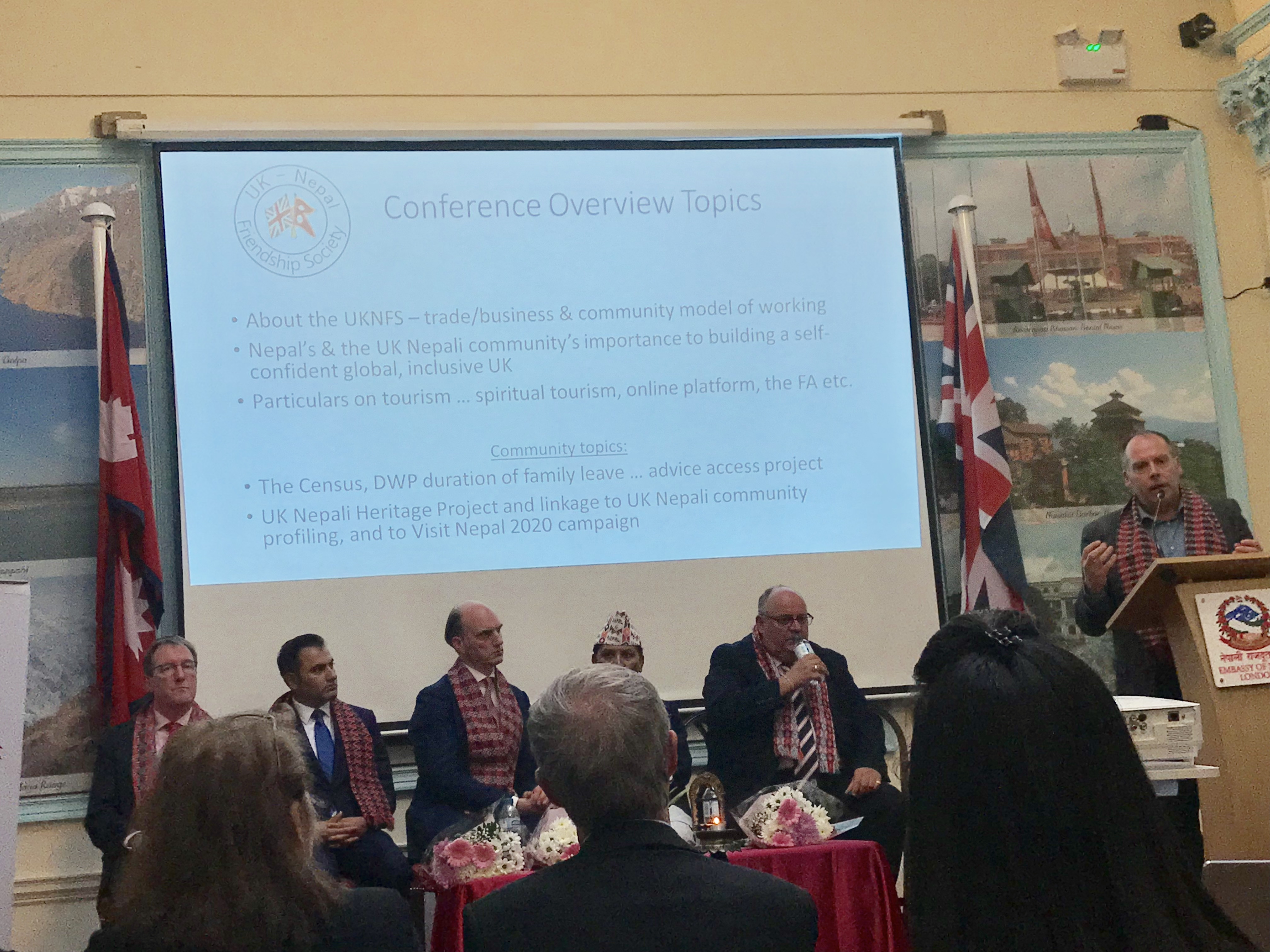 The president of the Nepal-Britain friendship society Mr. Allen Marcel-sanca highlighted the effort of U.K. government to have a separate census of Nepalese community in2021. Once the number of Nepalese will be officially known the true contribution of the Nepalese community will be highlighted which gives the British government an opportunity to plan and work further to support them.
Special guest of the ceremony Member of House of Commons Mr  Leo Docherty  highlighted tremendous achievements such as   such as the tri-party government level dialogue in the issue of Gurkhas , Pension rise  , increase on medical allowances, mutual historic friendly sports tournament in football and cricket , Census of  Nepalese community in 2021, increase in the number of tourists visiting to Nepal , increase in the investment , organised effort to promote trade and tourism , high level political visit and dialogues , royal family visit to the Embassy and Nepal, Irish presidential visit etc to Embassy program and  Commended the tenure of Dr. Durga Bahadur Subedi and his team as the Golden era in the 200 years of the history of Nepal-Britain relationship.
Altogether 6 business companies were given an opportunity to pitch their business proposals on the ceremony. CEO of GEnerGy Mr Tikendra Dewan , CEO OF  Ddiwydyanol  Ltd Mr. Wynn Crompton, CEO of  Nemein Energy  Suzannah Bourne, CEO of Things to Do Mr Paul Nash, Financial coordinator of City of London Mr. Meirion Morgan gave a separate presentation about their business. Other many business ventures and entrepreneurs presented in the ceremony were benefited from the networking opportunity facilitated by the embassy. 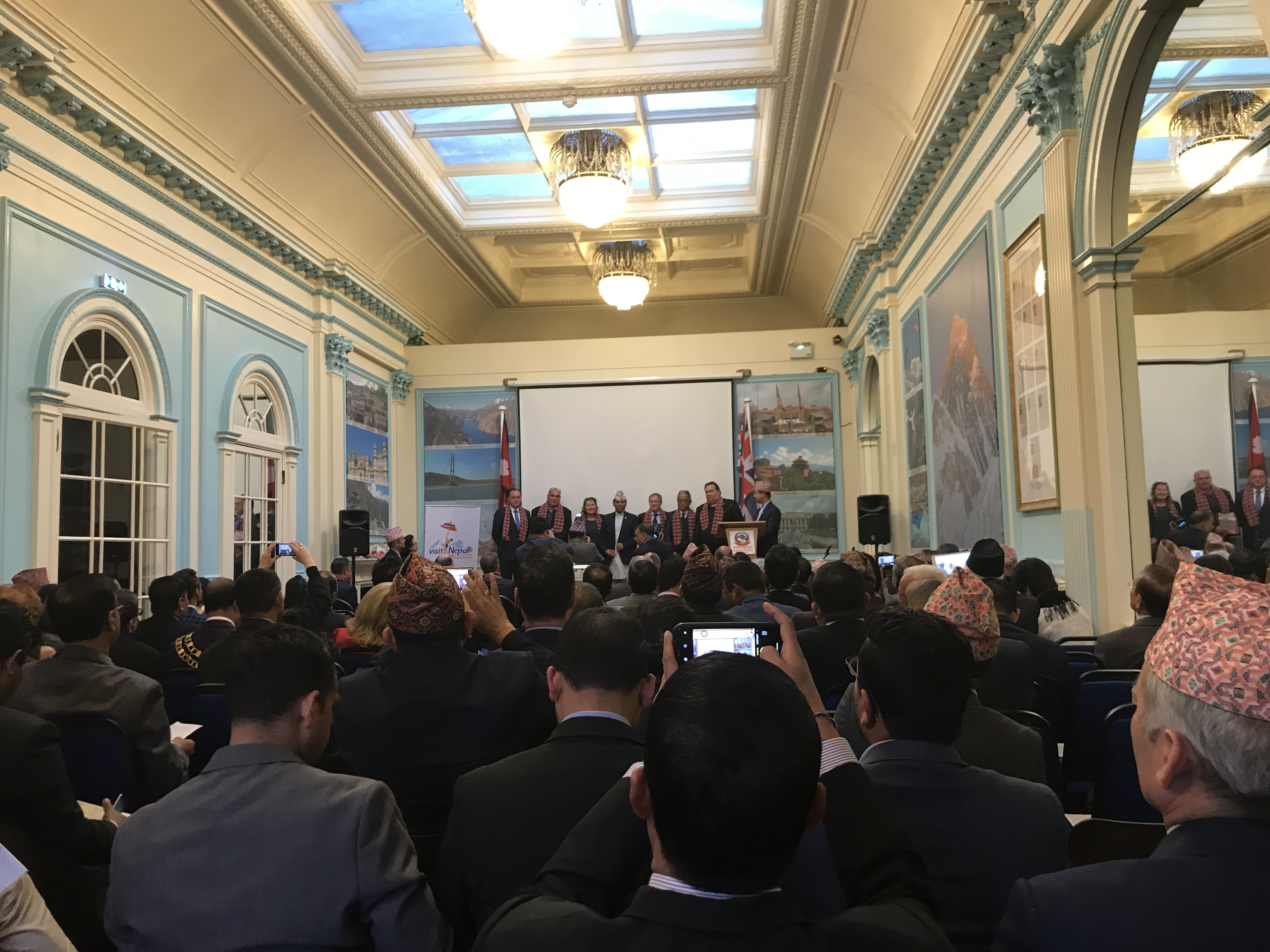 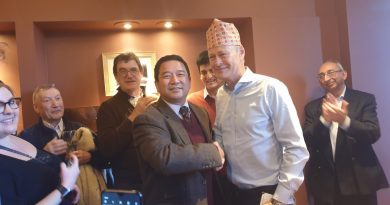 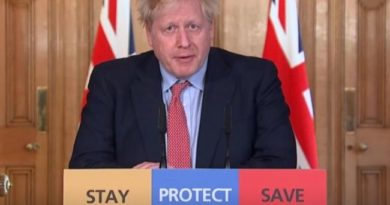 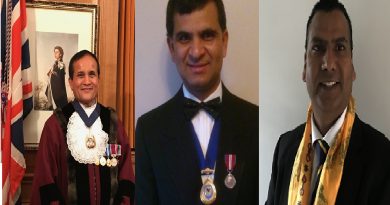