Over 3,000 kilograms of solid waste has been collected from Mt. Everest – South Asia Time

Over 3,000 kilograms of solid waste has been collected from Mt. Everest 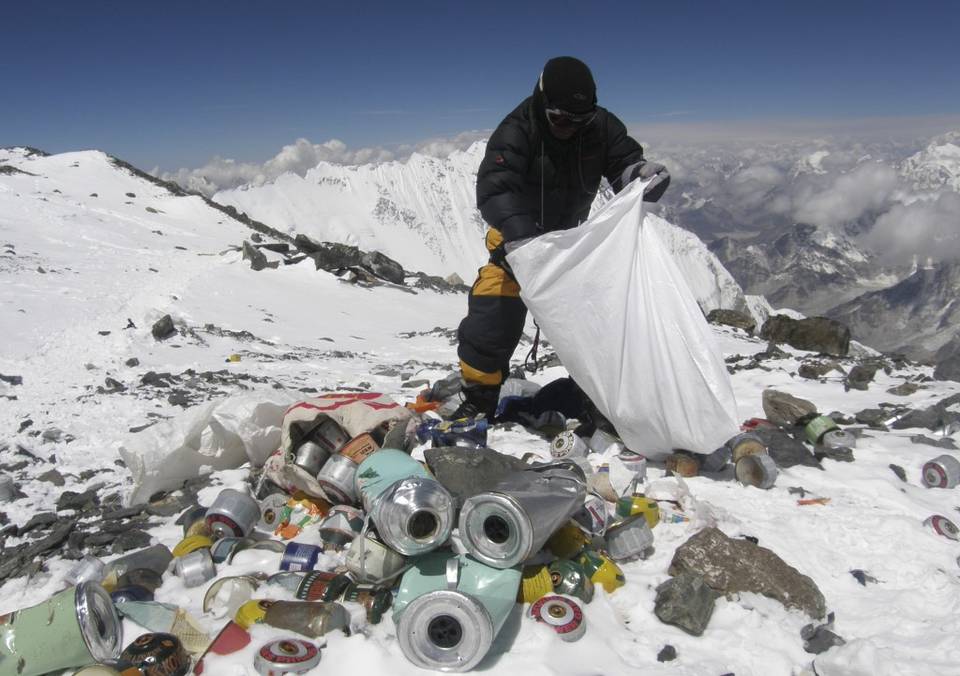 PTI : A total of 3,000 kilograms of solid waste has been collected from Mt. Everest since when Nepal launched an ambitious clean-up campaign on April 14. The campaign is aimed at bringing back tonnes of trash from the world’s highest peak, which has lately turned into a “garbage dump”.

Dandu Raj Ghimire, Director General of Department of Tourism, addressed a press conference on Sunday, saying that of the 3,000-kilogramme garbage collected so far, 2,000 kgs had been sent to Okhaldhunga while the remaining 1,000 kgs were brought to Kathmandu using Nepali Army helicopters for disposal.

“Our team has now reached the Everest Base Camp for the cleaning campaign. All the necessary things including food, water and shelter have already been arranged there,” Mr. Ghimire was quoted as saying by The Himalayan Times.

Mr. Ghimire said the team will also bring down dead bodies from the Everest if they are able to locate any.

This is the first time ever that all stakeholders have come together to clean up the world’s highest peak, Mr. Ghimire said.

The team has located four bodies while cleaning the Base Camp.

Mr. Ghimire said the Tourism Department estimates that around 23 million Nepalese rupees will be spent for the campaign.

The department has estimated that at least 500 foreign climbers and over 1,000 climbing support staff will visit the higher camps of Mt. Everest this season as they prepare to scale the world’s highest peak as well as Mt Lhotse, the fourth tallest mountain, the report said.

Every year, hundreds of climbers, Sherpas and high altitude porters make their way to Everest, leaving behind tonnes of both biodegradable and non-biodegradable waste — including empty oxygen canisters, kitchen waste, beer bottles and faecal matter — on the highest peak, which has lately acquired notoriety as the “world’s highest garbage dump”.

“Our goal is to extract as much waste as possible from Everest so as to restore glory to the mountain. Everest is not just the crown of the world, but our pride,” Mr. Ghimire told reporters in Kathmandu.

There have been attempts in the past to clean up Everest, including a 2014 government-mandated provision making it mandatory for every climber to come down the peak with at least 8kgs of garbage — the amount of trash estimated to be produced by one climber.

“If only climbers brought back their own waste, it would greatly help keep Everest clean. It’s not about the 8-kg waste, but bringing back the waste they produce,” Mr. Ghimire was quoted as saying by The Kathmandu Post.

“Everything on Everest, other than rock and snow, will be brought back. The goal is to send the message that we should keep this mountain pollution free,” said Tika Ram Gurung, secretary of the Nepal Mountaineering Association.

The month-and-a-half clean-up campaign is supported by a number of governmental and non-governmental agencies.

The campaign will conclude on May 29, the day marked every year to commemorate the first summit of Everest by Edmund Hillary and Tenzing Norgay in 1953.

The collected waste will then be “showcased” in Namche town, before being ferried down to Kathmandu, where it will once again be showcased on World Environment Day on June 5.