London : The British Travel and Hospitality award Hall of Fame has finally announced all the nominees and the winners of the year  2019 at London on Monday.

The British Travel and Hospitality Hall of Fame recognizes the highest achievers in the travel, hospitality, tourism and leisure sectors. Inductees to the Hall of Fame have not only achieved phenomenal business success but have also mentored, inspired and shaped those around them.

In addition to honoring those with a long track record of high achievement, the Hall of Fame also acts as an incubator for rising talent; each year recognizing a Young Managerand Young Entrepreneur.  The Business Achievement Award and Sustainable Business Award is also presented alongside the Member induction ceremony.

The Hall of Fame is owned and hosted by Jacobs Media Group, the parent company of flagship brands Travel Weekly and The Caterer, and is held at The Dorchester hotel in London.

Saga Travel’s head of trade sales Iain Powell was named the young manager of the year at the event, at the Four Seasons Hotel in Park Lane, London, on Monday April 29.

Powell spoke of being ‘overwhelmed’ to win, he said: “I think it’s a good point to mention that this isn’t based on my success of 2018, ultimately a lot of that is the success of my team. I’m so proud of the way they’ve embraced change and the way they’ve risen to the challenge which has been pretty steep. We’ve put some pretty big targets in front of them and they’ve hit them so it’s been incredible.

The awards, which honour the highest achievers in the travel, tourism and hospitality sectors, also included Sustainable Business Award, which this year went to small group tour operator Intrepid Travel Group, which last year became the biggest travel company in the world to achieve ‘B Corporation’ status in recognition of its ‘purpose beyond profitability’. 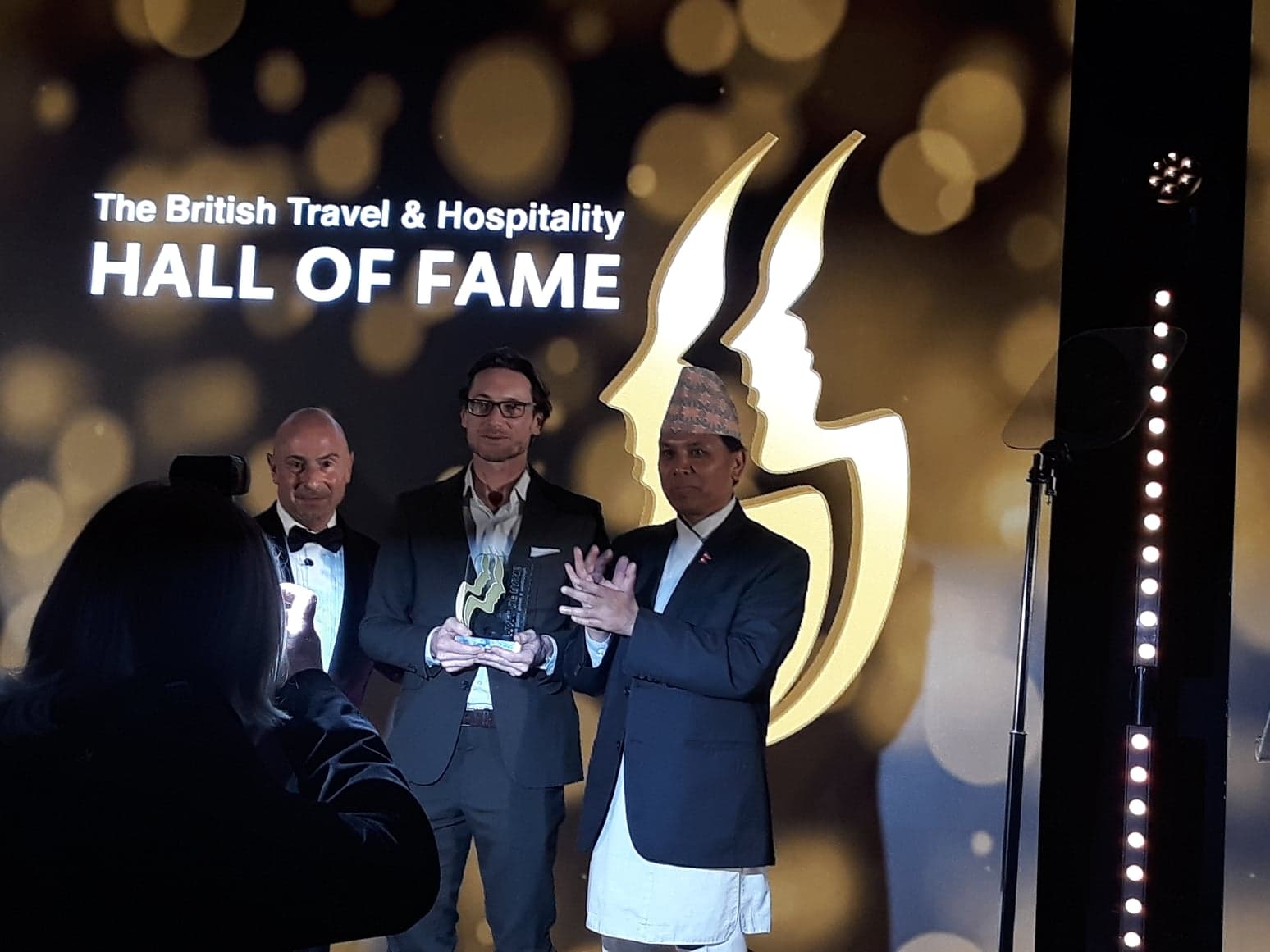 The sustainable business award category was provided by the official tourism management body of Nepal, Tourism Board of Nepal. The award was announced and handed to the winner by the ambassador of Nepal to the U.K. Dr. Durga Bahadur Subedi.  On the occasion, Dr. Subedi urged all the travel and tourism entrepreneurs to promote Nepalese tourism products and services stressing the ambitious plan of the of Nepal to celebrate the year 2020 as a Visit Nepal special year.

The 2019 Business Achievement of the Year award went to foodservice and hospitality operator WSH.

Six industry leaders were also inducted into the British Travel and Hospitality Hall of Fame at the Monday night event. They were: Frank Del Rio, chief executive of Norwegian Cruise Line Holdings; the co-owners of AmaWaterways, Kristin Karst and Rudi Schreiner; Bea Tollman, founder of the Red Carnation Hotel Collection; and Gary and Rita Beckwith, founders of City Cruises.

The Hall of Fame is part of Jacobs Media Group, which includes Travel Weekly and hotel and hospitality-focused publication The Caterer.