Nepal Survey: Does a Seat at the Table Guarantee Gender Equality? 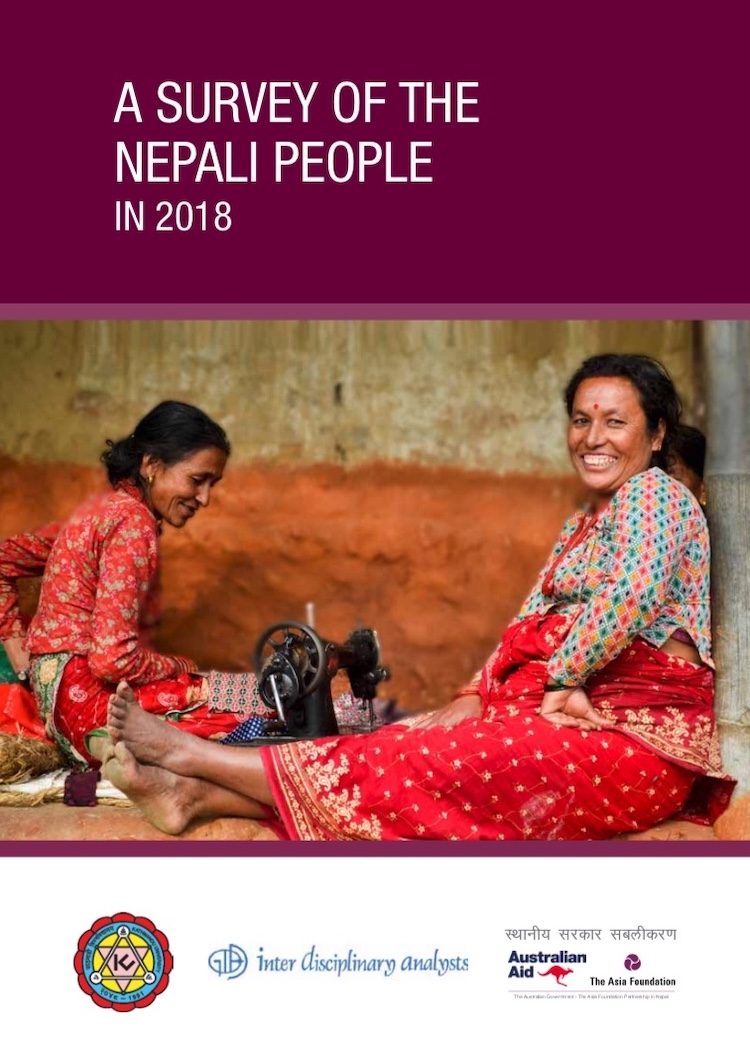 From The Asia Foundation

Nepal’s constitution mandates that women hold at least 33% of seats in the national parliament and provincial assemblies, and at least 40% in local governments. These provisions, enshrined in 2015, have given a record number of women a place at the table in Nepal’s political sphere. In spite of this, meaningful, widespread participation in major decision-making by women in Nepal remains elusive.

The Asia  Foundation’s recently released A Survey of the Nepali People in 2018 gathered the views, aspirations, and priorities of 7,056 Nepalis on the overall direction of the country, the economy, the state of governance, and personal safety, as well as gender relations and the position of women in society. The Survey reveals that Nepalis are cautiously optimistic about how things are unfolding in the country, suggesting that Nepal may finally be on a path to stability after two decades of political upheaval and conflict. Just over half of respondents (51.5%) say, as they did in the previous Survey, in 2017, that the country is headed in the right direction. Most say they trust local government more than provincial or federal government. Opinions on service delivery, security, access to justice, and the economic outlook remain positive.

The picture looks different, however, when viewed through a gendered lens, with pronounced variations by province, class, caste, ethnicity, and gender on issues related to identity, inclusion, and gender roles and preferences.

Although a large proportion of Nepalis believe in greater equality for men and women, the Survey suggests that gender stereotypes still have deep roots in Nepali society. A majority of Nepalis agree that both sons and daughters are important (87.5%), that higher education is important regardless of gender (91.9%), and that women should be encouraged to work outside the home (89.4%) and to have a political career (79.1%). Yet, around half of respondents (49.6%) say that women should not control their own income, movements, or decisions. Some 39.5% say that a woman has no right to decide how many children she will bear; 28.3% say that a man has the right to punish his wife if she disobeys him; 77.7% agree that “to be a man, you have to be tough”; and 53.1% say that it is primarily a man’s responsibility to meet his family’s financial needs.

Nepali women continue to report, in small but significant numbers (3–9%), that their gender puts them at a disadvantage—on public transport (9.9%), in workplace interactions (6.5%), in government offices (5.2%), when seeking health services (4.5%), and in school or college (3.6%). In the provinces, women from Provinces 2 and 5—particularly those from the Terai—are more likely to report feeling disadvantaged by their gender. When disaggregated by income and ethnicity, poor women and Madhesi Dalit women are two to three times more likely than Nepali women overall to say that being a woman is a disadvantage.

Many Nepalis see men and women as equally capable of filling significant leadership positions in government and community organizations. While women in recent history have held the offices of president, speaker of the House of Representatives, and chief justice, the Surveyreveals that Nepalis generally consider women more suited to community organizations than federal or provincial government or the leadership of a political party or a private company. This tendency is considerably stronger in the Terai region than in the Hills.

The 2018 Survey shows that there is room for improvement when it comes to gender equality in Nepal. Perhaps there is a clue here to why women’s presence in government remains largely a token. It is now more important than ever for men and women, both, to address these gendered stereotypes and turn the idea of gender equality into action.

A Survey of the Nepali People in 2018,second in a longitudinal series of perception surveys, was conducted in September and October 2018 with support from the Australian Government–The Asia Foundation Partnership on Subnational Governance in Nepal. Read the full Survey.