The billionaire Hinduja brothers have been named as the wealthiest people in the UK for a third time, according to the Sunday Times Rich List.

Sri and Gopi Hinduja, who have made their fortune through stakes in a wide range of industries like property, oil and gas, IT, media, energy, banking, and even healthcare, saw their wealth increase to £22bn ($28.5bn)

Every year, the Sunday Times calculates who are the richest people in Britain and release dozens of lists, according to identifiable wealth including land, property, other assets such as art, and shares in companies. The calculations do not include the amount contained in people’s bank accounts.

In second place are another set of billionaire brothers — David and Simon Reuben. The two have a fortune of £18.664bn after investing in property, scrap metal, and carpets. 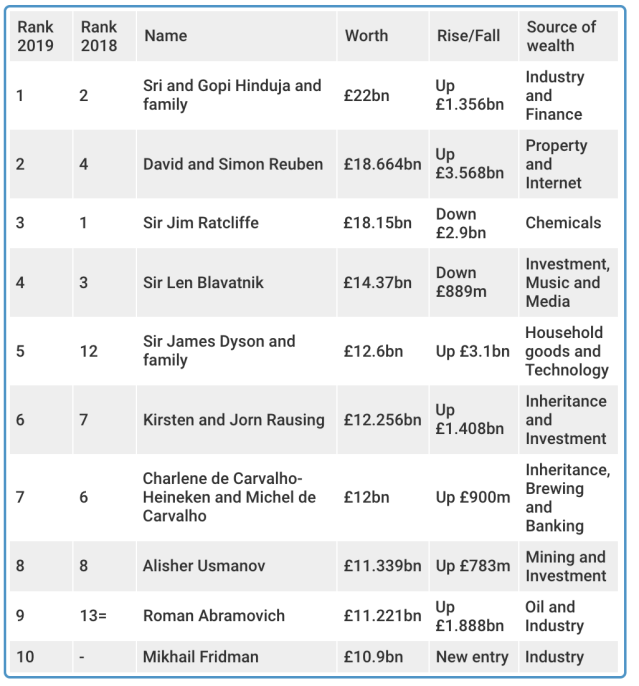 Sri and Gopi Hinduja saw their fortune increase by 1.356 billion pounds ($1.7 billion) in the last year to 22 billion pounds, the BBC quoted the list as saying.

The Hinduja Group, a family business, was founded in Mumbai in 1914, and now it has interests around the world including in oil and gas, banking, IT and property.

British citizens Sri, 83, and Gopi, 79, who are based in London, are two of the four brothers controlling the empire. The two moved to London in 1979 to develop the export business.

The third brother Prakash manages the group’s finances in Geneva, Switzerland while the youngest, Ashok, oversees the Indian interests.

Among the properties they own is the Old War Office in Whitehall, which they plan to reopen as a luxury hotel.