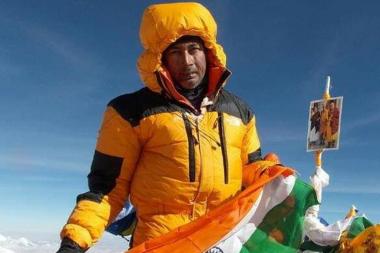 PTI : Two Indian climbers from Kolkata have died near the summit of Kanchenjunga during an expedition on the world’s third highest mountain in Nepal. One of them had successfully scaled the mountain.

Biplab Baidya, 48, and Kuntal Karar, 46, died overnight at an altitude of about 8,000 metres (nearly 26,246 feet) above Camp IV of Kanchenjunga after they were unable to continue their descent due to hypothermia and snow blindness.

The two climbers, who were a part of five-member team from West Bengal, died as attempts were being made to bring them to Camp IV during a rescue operation by the Project Possible team leader Nirmal ”Nims” Purja along with the fellow members. “Biplab made it successfully to the summit point while Kuntal fell sick on his way. Both of them died while coming down,” Mira Acharaya, a staffer at Nepal’s Ministry of Tourism team, deployed at the base camp, told news agency PTI.

“Two Indian climbers and a German mountaineer who also suffered from serious frostbite will be evacuated from the high altitude camp as early as possible,” he told Nepal-based daily, the Himalayan Times.

A climber from Chile, Rodrigo Vivanco, is also missing from above the Camp IV since last evening.