How Narendra Modi won with an even bigger majority? – South Asia Time

How Narendra Modi won with an even bigger majority? 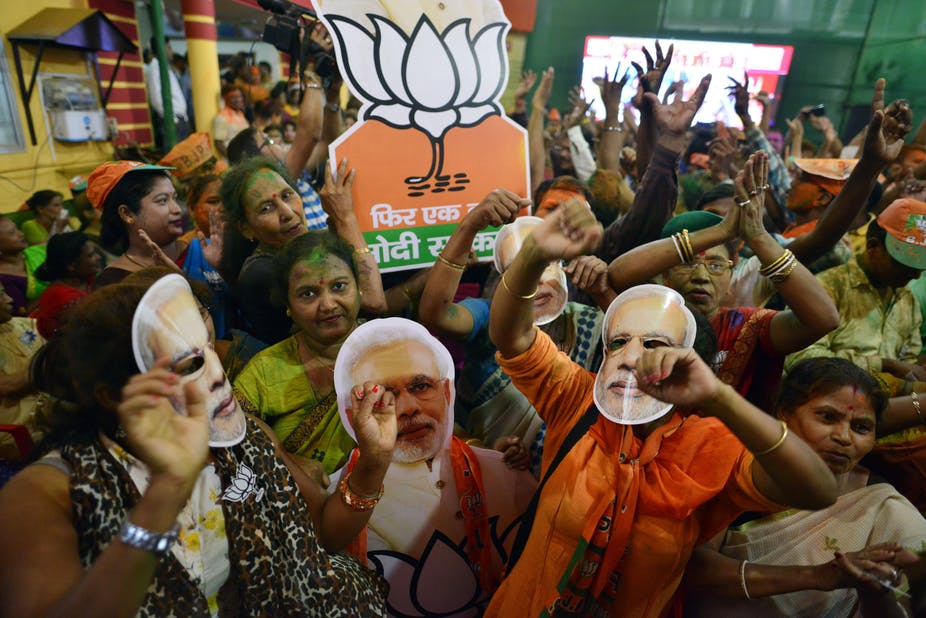 By Katharine Adeney, University of Nottingham,

The stunning majority for the Bharatiya Janata Party (BJP) in the 2019 Indian election is a massive political achievement for its leadership: the prime minister, Narendra Modi, and the party’s president, Amit Shah. Early results from the world’s biggest democratic exercise show the BJP is likely to winmore than 300 seats in India’s parliament, the Lok Sabha, more than the 282 it won in 2014 and the 272 needed for a majority.

In early 2019, such a result had looked uncertain in the wake of state election defeats in Chhattisgarh, Madhya Pradesh and Rajasthan – part of the Hindi heartland that had helped Modi to victory in 2014. Opponents of the BJP dared to think that the Congress Party – the former “Grand Old Party of India” which had been reduced to only 44 seats in 2014 – was sufficiently revitalised to mount a credible challenge in 2019.

As the early months of 2019 dawned, scandals about the allocation of a defence contract as well as rising unemployment figures – and the suppression of these figures – made a bad start to the campaign. The Mood of the Nation survey conducted in December 2018 and January 2019 concluded that the National Democratic Alliance, the coalition the BJP heads, would not win a majority in the general elections.

We will have to wait for results from post-election surveys to get detailed analysis of the segments of society that voted for the BJP, but several points are clear about Modi’s victory.

Modi benefited tremendously from the fallout from a suicide attack in Pulwama in Jammu and Kashmir that killed 40 Indian soldiers in February 2019. Although responsibility for the attack was claimed by a Pakistani terrorist group, it was carried out by a local Kashmiri. One reading of this could have been that Modi’s policies in the Kashmir valley, such as the increase in the use of pellet guns, blinding hundreds and killing at least 14, had led to the attack. But Modi swiftly turned it to his advantage.

Not only did he pursue an aggressive course of action with airstrikes against militants on Pakistani territory, he also successfully sold it as a huge success, despite some evidence that the fighters had missed their target. The national security narrative took centre stage in the 2019 election, something that the opposition parties were unable to counter.

The second factor was the Congress campaign. The party’s leader, Rahul Gandhi, has come a long way since his debut in a national election in 2014. But the Congress campaign failed on two fronts. The first was the messaging: it was a mistake to try and attack Modi on allegations of corruption rather than focusing on the economic failures of his first term. Focusing on corruption only served to remind the electorate of the Congress party’s involvement in previous (very large) corruption scandals.

Yet, even had Congress focused solely on the economy, this may not have led to a very different result. The BJP swept the board in the 2017 Uttar Pradesh state elections, held only a few months after Modi’s disastrous demonetisation policy which saw the withdrawal of 86% of India’s currency. The second failure was the high-handedness with which Congress approached the formation of its own political alliances. The BJP was extremely accommodating of its alliance partners in states such as Bihar and Maharashtra, but Congress did not manage to agree a deal with its potential partners in Delhi and in Uttar Pradesh.

The third factor was the presidential nature of the campaign. Modi successfully portrayed the campaign as Modi v Rahul. Such a framing benefited Modi – a fantastic campaigner. He built on the national security narrative by framing himself as a Chowkidar, or watchman, who would protect India. This built on his reputation as someone who would make India great – something that played extremely well in the campaign.

The third factor was the presidential nature of the campaign. Modi successfully portrayed the campaign as Modi v Rahul. Such a framing benefited Modi – a fantastic campaigner. He built on the national security narrative by framing himself as a Chowkidar, or watchman, who would protect India. This built on his reputation as someone who would make India great – something that played extremely well in the campaign.

Modi’s profile in India is huge – he takes personal credit for all initiatives, and his picture appears multiple times in the same editions of the daily newspapers when government initiatives are flagged.

But curiously, for such an effective campaigner, he held his first press conference as prime minister in the final weeks of the 2019 campaign. And even then it was dominated by Shah – and Modi didn’t answer a single question.

The BJP has had extraordinary control of the political narrative during this election, aided by its extremely large war chest which has helped it penetrate even deeper into traditional and social media. While only a quarter of Indians use WhatsApp – still 300m people – the creation of promotional material specifically targeted at different segments of society has played a huge role in advancing a particular political narrative.

In addition, the Election Commission has been criticised for clearing BJP leaders of many alleged election code violations, and only belatedly banning the showing of a biopic about Modi on the eve of the elections. It also allowed the BJP’s TV channel, NaMo TV, to run without challenge throughout the campaign. It has now gone off air.

The final point to make relates to the opinions of voters. The BJP ran a very polarising campaign. In 2014, 51% of those who responded to India’s National Election Studies said they believed that democracy meant that the will of the majority community should prevail – a steep rise from 2009. This demonstrates a move towards the right and an acceptance of Hindu majoritarianism in Indian politics – a position that questions whether religious minorities, particularly Muslims, should have special rights within India. This trend of Hindu majoritarianism is higher among the young – a growing demographic within India – who have grown up in an era in which the BJP has been a national player.

This does not bode well for religious minorities in the world’s largest democracy, 20% of whom are non-Hindu. Although Modi tweeted after the results that “together we will build a strong and inclusive India”, the attacks on Muslims, both political and actual during his first term cast doubt over the second part of this promise.