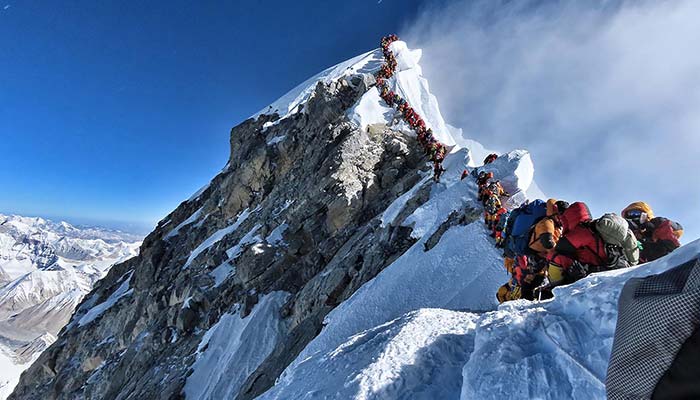 By AFP (KATHMANDU) : A traffic jam of climbers in the Everest “death zone” was blamed for two of four new deaths reported Friday, heightening concerns that the drive for profits is trumping safety on the world’s highest peak.

Nepal has issued a record 381 permits costing $11,000 each for the current spring climbing season, bringing in much-needed money for the impoverished Himalayan country.

But a small window of suitable weather before the short season ends has in recent days triggered bottlenecks of hundreds of climbers wanting to achieve for many – although perhaps not for purists – the ultimate in mountaineering.

The four latest deaths reported on Friday, taking the toll from a deadly week on the overcrowded peak to eight, include two Indians and a Nepali on the Nepal side and an Austrian on the way down on the northern Tibetan side, officials and expedition organisers said.

Ang Tsering Sherpa, former president of the Nepal Mountaineering Association, said that the weather window to summit this season was narrow, meaning that many teams had to wait to go up.

“Spending a long time above the death zone increases the risk of frostbite, altitude sickness and even death,” he said.

Kalpana Das, 52, reached the summit but died on Thursday afternoon while descending, as a huge number of climbers queued near the top. The other Indian, Nihal Bagwan, 27, also died on his way back from the summit.

“He was stuck in the traffic for more than 12 hours and was exhausted. Sherpa guides carried him down to Camp 4 but he breathed his last there,” said Keshav Paudel of Peak Promotion.

A 33-year-old Nepali guide died at the base camp on Friday after he was rescued from Camp 3 for falling sick.

Wednesday claimed the lives of an American and another Indian.

Donald Lynn Cash, 55, collapsed at the summit as he was taking photographs, while Anjali Kulkarni, also 55, died while descending after reaching the top.

Kulkarni’s expedition organiser, Arun Treks, said heavy traffic at the summit had delayed her descent and caused the tragedy.

“She had to wait for a long time to reach the summit and descend,” said Thupden Sherpa. “She couldn´t move down on her own and died as Sherpa guides brought her down.”

Pasang Tenje Sherpa, of Pioneer Adventure, told AFP that Cash collapsed on the summit and died close to Hillary Step as guides were bringing him back.

Last week, an Indian climber died and an Irish mountaineer went missing after he slipped and fell close to the summit and is presumed dead.

The Irish professor was in the same team as Saray Khumalo, 47, who this week became the first black African woman to climb Everest and who is hoping to conquer the highest summits on each of the seven continents.