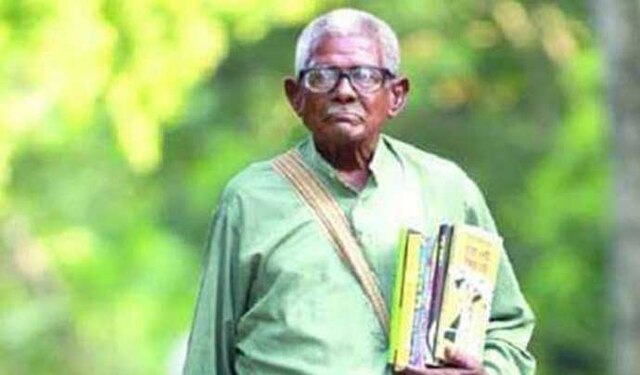 Polan Sarkar, the Bangladeshi man who launched an unique movement for learning in Rajshahi by distributing books at his own expense, has passed two weeks ago

According to BDNews24 , the 98-year-old was suffering from several old age-related complications which had worsened over the last one week.

He breathed his last in his residence at the Bousa village in Rajshahi’s Bagha Upazila on Friday afternoon, said his son Haider Ali.

The government had honoured the nonagenarian with the Ekushey Padak in 2011 for his service to society. The nation has lost an avid social worker, said State Minister for Foreign Affairs Shahriar Alam as he mourned the demise of Palan.

Born in Natore in 1921, Palan was named Harez Uddin at birth. But he became known to locals as Polan Sarkar.

Following the death of his father, Polan was forced to give up his studies at a primary level due to financial constraints. But he never stopped reading books.

He started a new chapter in his life at his maternal grandfather’s residence in the Bousa village during his pre-teen days. Polan landed the job of a tax collector for the Bousa union council in 1962. He had also inherited some of his grandfather’s assets.

During his youth, Polan joined a Jatra or local theatre team where he performed the role of a jester. That was the time when he became engrossed in reading books.

In 1965, Polan was named chairman of a local high school after he donated land for the construction of the school building.

He introduced the school’s custom of handing books as gifts to students who ranked among the top ten performers in their respective classes. This sparked interest among other students who would go on to compete for books.

Polan subsequently decided that everyone would receive books on the condition that it was returned after reading. His book-reading movement was born out of this decision.

After he was diagnosed with diabetes in 1992, Polan would go on regular walks during which he would distribute books to interested readers.

He visited different village households and exchanged old books for unread ones.

A known figure among villagers in Rajshahi, Polan gained national recognition in 2006 after he was featured in an episode of Ityadi, a popular programme on Bangladesh Television.

In 2009, the Rajshahi District Council constructed a library in the courtyard of his house.

He launched five area-based book distribution centres a few years ago and also persuaded local shop owners to keep books in their shops. Locals collect books from these shops and return it after they have finished reading.

In an interview in 2016, the avid social activist expressed a desire to continue his movement to bring positive change in society for as long as he could walk.