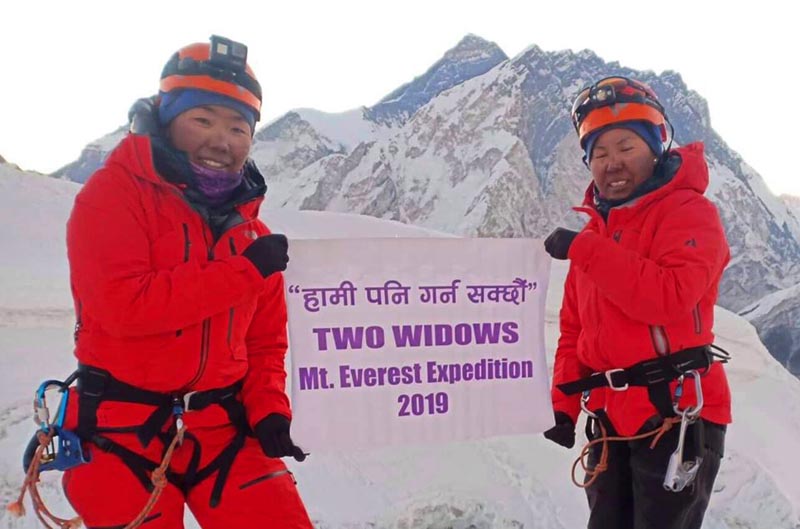 The pair’s media manager, Doma Sherpa, also confirmed their feat in a phone interview with the Thomson Reuters Foundation.

“They are expected to reach the base camp on Friday,” said Doma, who like most Sherpa goes by her first name, after a telephone conversation with the widows’ team on the mountain.

Furdiki’s climber husband died while fixing ropes for his foreign clients on Everest in 2013.

A year later, Nima Doma Sherpa’s husband was killed along with 15 other Sherpas in an avalanche near the base camp.

The pair said the grief of losing a partner – let alone sole breadwinner and father to their children – was compounded by the social stigma that comes with being a widow in their conservative Himalayan country.

Widows are generally expected to mourn until the end of their lives in South Asia, renouncing colourful clothes, jewellery, rich and spicy food, and even festivals as they are deemed inauspicious, say women’s rights experts.

They say that widows in developing countries are routinely disinherited, enslaved or evicted by their in-laws, accused of witchcraft or forced to undergo abusive sexual rituals.

The duo instead decided to climb Everest – to honour their husbands and empower fellow widows, they told the Thomson Reuters Foundation in an interview before leaving for their expedition in April.

“The two of us thought: ‘Why not break this tradition of mistreatment … and actually change things? What’s wrong if we step out and live life?’,” Nima Doma said, adding that she was sure her husband would be proud of her if she climbed Everest.

In an earlier interview with Reuters, Furdiki said: “The death of my husband is not the end of my life”.

After their descent, they had said they would launch a charity to raise funds and help widows learn new skills.

Nepal is home to eight of the world’s 14 highest mountains.

Everest, which straddles the Nepal-China border, has been climbed by about 5,000 people since it was first scaled by New Zealander Sir Edmund Hillary and Tenzing Norgay Sherpa in 1953.

Climbing officials say only about 550 of them were women. (Editing by Annie Banerji @anniebanerji and Lyndsay Griffiths)