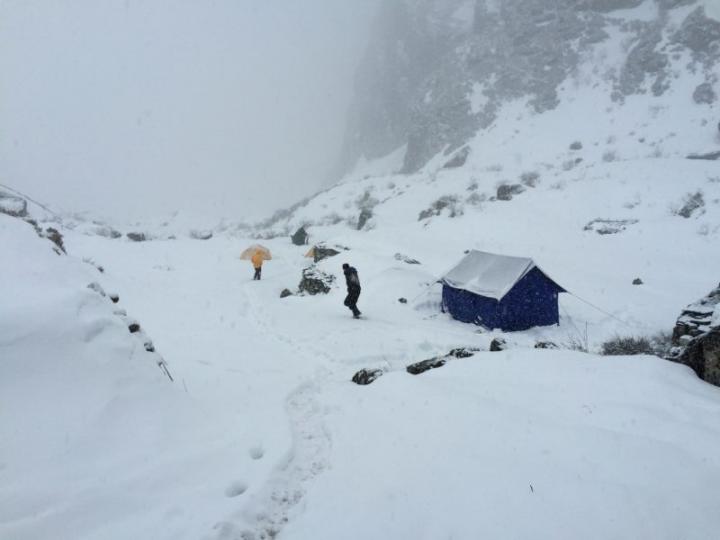 Eurekalert : A new study to assess the contribution that Asia’s high mountain glaciers make to relieving water stress in the region is published this week (29 May 2019) in the journal Nature. The study has important economic and social implications for a region that is vulnerable to drought. Climate change is causing most of the region’s glaciers to shrink.

British Antarctic Survey (BAS) glaciologist Dr Hamish Pritchard found that during droughts, glaciers become the largest supplier of water to some of Asia’s major river basins. This melt-water is important for the people living downstream when the rains fail and water shortages are at their worst.

Each summer, glaciers release 36 cubic kilometres of water – equivalent to 14 million Olympic swimming pools – to these rivers. This is enough water to fulfil the basic needs of 221 million people, or most of the annual municipal and industrial needs of Pakistan, Afghanistan, Tajikistan, Turkmenistan, Uzbekistan and Kyrgyzstan.

This supply is unsustainable, though, because climate change is causing the region’s glaciers to lose 1.6 times more water than they gain each year from new snowfall.

The high-mountain region of Asia, known as the Third Pole, encompasses the Himalayas, Karakoram, Pamir, Hindu Kush, Tien Shan, Kunlun Shan and Alai mountains and has 95,000 glaciers in total. About 800 million people are partly dependent on their meltwater.

Dr Pritchard analysed estimates of the glacier contribution with the amount of precipitation in average years and in drought years. He used climate datasets and hydrological modelling to calculate the volume of glacier water entering and leaving the region’s major river basins.

“”This study is about answering the question – why do glaciers matter? Even in high-mountain Asia, they are remote and cover quite a small part of the region. It turns out that they are particularly valuable to society as a natural store of water that keeps the rivers flowing through summer, even through long droughts.

“Against a background of increasing drought-related water and food shortages and malnutrition, which have been predicted with high confidence for the coming decades, Asia’s glaciers will play an increasingly important part in protecting downstream populations from drought-induced spikes in water stress–spikes that, without mitigating changes in the way water is stored and used, are the potential trigger for a sudden jump in the price of water that could be profoundly destabilising for this region.”

This research paper was published originally in 2017 but was retracted when a reader pointed out an error. Consequently, Dr Pritchard re-worked his modelling afresh.

An editorial appears in the same issue of Nature – Retracting a manuscript can be an opportunity to revisit the topic afresh.

Photos of the Asian mountains are available on request from the Press Office as above.

This research is part of an initiative to use polar expertise to understand environmental issues in other parts of the world. It is partially funded by NERC’s Polar Expertise – Supporting Development: Water resources of the Upper Indus’ (NE/R000107/1) the programme aims to measure how much water much is stored as glacier ice in High Mountain Asia. In warm weather, water from melting glaciers sustains the flow of rivers through dry seasons or droughts, providing fresh water after the rains have stopped and seasonal snow has disappeared.

British Antarctic Survey (BAS), an institute of the Natural Environment Research Council (NERC), delivers and enables world-leading interdisciplinary research in the Polar Regions. Its skilled science and support staff based in Cambridge, Antarctica and the Arctic, work together to deliver research that uses the Polar Regions to advance our understanding of Earth as a sustainable planet. Through its extensive logistic capability and know-how BAS facilitates access for the British and international science community to the UK polar research operation. Numerous national and international collaborations, combined with an excellent infrastructure help sustain a world leading position for the UK in Antarctic affairs. For more information visit http://www.bas.ac.uk