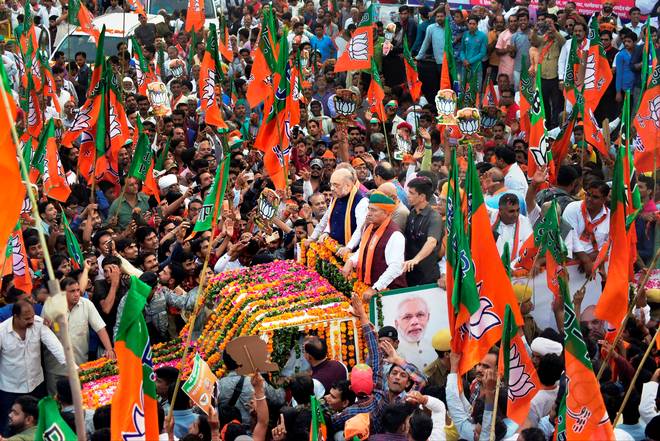 Elections in the world’s biggest democracy have become the most expensive too.

Spending by political parties and candidates to woo 900 million voters in the just concluded polls cost them nearly Rs 60,000 crore ($8.7 billion), more than double of 2014 polls, according to the New Delhi-based Centre for Media Studies. The report, based on field studies, analysis and estimation, found that they spent Rs 700 per voter or nearly Rs 100 crore in each parliamentary constituency, Bloomberg reported.

With some constituencies comprising as many as three million voters, equivalent to the population of Jamaica, candidates had to spend more for publicity and logistics and in some cases distributed cash for votes, according to the report. India’s poll panel prescribes a seven million-rupee ceiling on spending by a candidate.

About $6.5 billion was spent ‘during the US presidential and congressional races in 2016, according to OpenSecrets.org, which tracks money in American politics.

At this rate, expenditure in the next 2024 general election could cross Rs 1 trillion , said N. Bhaskara Rao, chairman of CMS.

“Mother of all corruption lies in the spiraling election expenditure,’’ said Rao. “If we are not able to address this, we can’t check corruption in India.’’

The Bharatiya Janata Party spent close to Rs 27,000 crore in the recently-concluded Lok Sabha elections, according to a report by the Centre for Media Studies released on Monday. The amount was 45% of the total expenditure of Rs 60,000 crore, which is more than what was spent in 2014. The report has called the 2019 General Elections the “most expensive election ever, anywhere”.

At this rate, expenditure in the 2024 General Elections could cross Rs 1 trillion, said CMS chairperson N Bhaskara Rao, according to Business Standard. “Mother of all corruption lies in the spiralling election expenditure,’’ said Rao. “If we are not able to address this, we can’t check corruption in India. The scale of the expenditure should scare us and compel us to think of taking corrective steps to build a stronger democracy.”

The report described the 2019 Lok Sabha polls “a watershed election”. The major source of poll funding is now corporate. “Crowd funding where citizen and community contributes for campaigns is no longer a sought after source,” said the report. From the Scroll.in