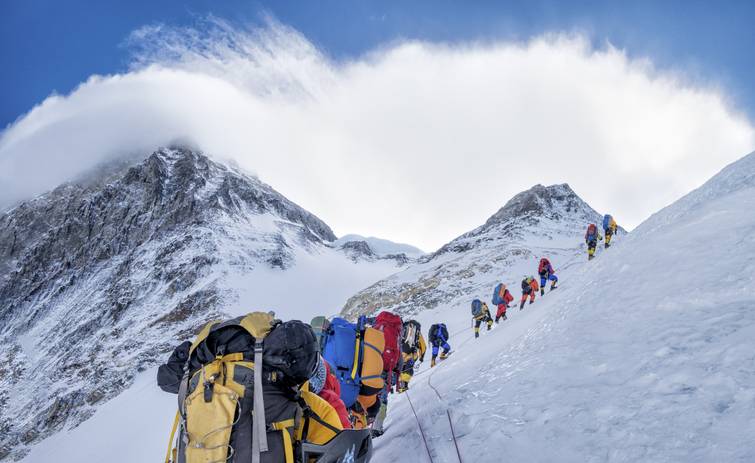 AFP : Under pressure after a deadly season on traffic-clogged Mount Everest, Nepal is considering tightening access to the world’s highest peak, but mountaineering experts fear the proposed changes could amount to little more than lip service.

Eleven people died during the climbing season that ended this week, as record numbers lined the route to the summit. Although overcrowding was blamed for at least four deaths, many say inexperience is a bigger killer.

“People who know nothing of climbing, never been on a mountain, came and tried to climb Everest,” Chilean mountaineer Juan Pablo Mohr told AFP after returning to Kathmandu.

“A lot of people didn’t know how to put (on) crampons or (use) the fixed ropes,” he said, adding they relied on an army of sherpas or Nepali guides to help them accomplish such basic tasks.

For years, Kathmandu has issued permits to anyone willing to pay $11,000, regardless of whether they are rookie climbers or skilled mountaineers.

But after a devastating spring season, officials told AFP they are considering imposing more restrictions.

“We are looking into having a minimum requirement for climbers, fixing more ropes or taking more oxygen and sherpas,” said Mohan Krishna Sapkota, secretary at Nepal’s tourism ministry.

For veteran mountaineers, the announcement of new rules amounts to little more than a futile annual exercise — with the government each year promising tougher measures that fail to materialise by the following spring.

Russell Brice, whose company Himalayan Experience (Himex) has been organising Everest expeditions for decades, told AFP his meetings with government officials over the years had left him in no doubt about their indifference towards the industry.

“The ministry is in denial of overcrowding, of issuing too many permits, not checking what people are doing and so on,” Brice said.

“It is just stupid words,” he said, adding, “they are not interested.”

In 2014, Kathmandu said it would double the number of fixed ropes near the summit to prevent traffic jams.

The government also said it would station soldiers and police at Everest base camp for assistance. An AFP visit to the area in 2015 revealed no such deployment.

Unlike Tibet, which caps the number of Everest climbers at 300, there are no limits on the Nepali side, making for an exceedingly profitable — and dangerous — business.

As cheaper operators have entered the fray, the number of climbers has shot up, creating deadly bottlenecks en-route to the top of the 8,848-metre (29,029-feet) peak — especially when bad weather cuts the number of summit days, as it did this year.

Phurba Tenjing Sherpa, who has guided clients on Everest for over a decade, told AFP one of the climbers who died should never have been allowed to go up, given her excessively slow pace.

But the woman, who was in her fifties, “would not listen” because she had paid the fee and wanted to see the summit, he said.

“Such climbers are increasing on Everest. They force us, they want to climb no matter what. Their stubbornness is killing people on the mountain,” he said.

The situation has deteriorated to such a degree that Nepal’s Mountaineering Association, which represents operators, is lobbying the government for stricter rules.

The association’s president, Santa Bir Lama, told AFP the high number of deaths this year was due to the increased presence of inexperienced climbers.

“Climbers should be self-reliant. It would be best if there is a criteria set for issuing permits,” he said.

For years after Edmund Hillary and Tenzing Norgay made the first ascent of Everest in 1953, access to the world’s most famous peak was a rare prize, offered only to solo mountaineers charting new routes or to climbers belonging to national teams or boasting major sponsorship deals.

But after Nepal scrapped its limit in the 1990s, operators have crowded the slopes for a slice of the multi-million dollar industry.

This year, the Himalayan nation made around $4 million from Everest permits alone.

“It is nice to see this income,” Himex’s Brice said.

But he warned the rush to reap profits was “detracting from the major attraction of Nepal, which is Mount Everest”.

“If we ruin that business, it’s going to have long-term effects”.