The boom in climbing tourism in Everest is dangerous and unsustainable 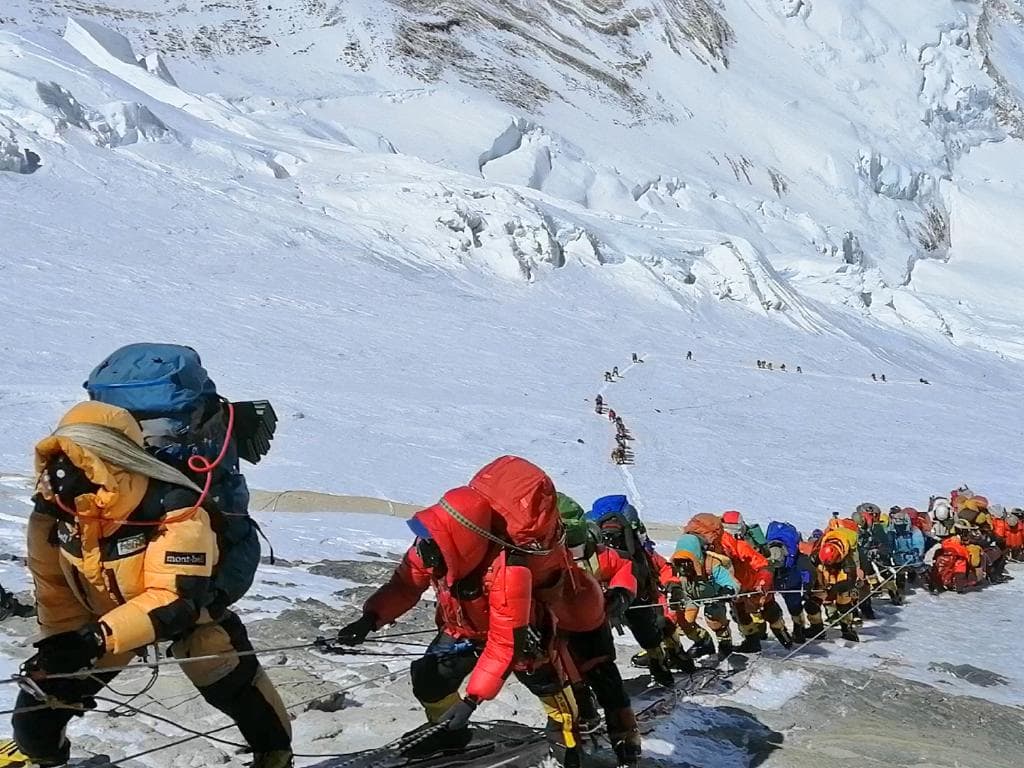 The last days of Mt Everest’s spring window for 2019 witnessed the deaths of 11 climbers. Images of hundreds of mountaineers queuing to reach the summit and reports of climbers stepping over dead bodies dismayed people around the world, many wondering how human beings had got it so wrong.

After the conquest of Annapurna and Everest in the 1950s, mountaineering became popular among the more privileged. But in the past two decades, mountaineering has taken on a increasingly commercial angle with disastrous results.

Experts report that aside from a very short weather window to climb Everest this season, a new generation of guides offering cheap expedition rates attracted a rash of novice mountaineers, which contributed to the high number of deaths. Those inexperienced climbers, some of whom had only climbed Mont Blanc (4,810m) and Aconagua (6,962m), should not have been there.

Until the beginning of the 21st century, mountaineering was an exclusive activity accessible only to a few. Twenty years later, despite being a high-risk activity that requires a high level of specialised skill, its popularity among recreational climbers has drastically increased. Climbing legend Reinhold Messner once said that for a fee, “almost anyone could brave a top-class peak” – meaning regardless of skill, ability or experience.

Many modern mountaineers are attracted by the Seven Summits Challenge, introduced by Messner in the 1980s, with the aim of climbing the highest peak on every continent. Cashed-up adventure tourists lured by the challenge face expensive mountain expedition packages – from £3,000 for Aconcagua and £30,000 for Everest.

Aconcagua in the Argentinian Andes is the second highest of the Seven Summits after Everest, and one of the cheapest to climb. The number of climbers attempting Aconcagua has increased by 400% since 1990 – 4,000 people a year now push for the summit.

Our current research project focusing on mountaineering tourism shows that this recent trend can be explained by the transformation of mountaineering from personal exploring to a commercial guided-tour industry which is capitalising on better accessibility to big mountains, affordable transportation and more advanced equipment. This boom in commercial adventure sports means “real” mountaineers are often outnumbered by tourists whose ambitions exceed their climbing skills.

Although technically Aconcagua is not considered a difficult climb, it reaches a high altitude, where climbers struggle with low humidity, low oxygen and severe winds, so the summit success rate is 30-40%.

In February 2019, we spent three weeks at Aconagua’s base camp, where rangers told us that the popularity of the mountain has triggered an increase in accidents and fatalities. But reinforcement of safety measures implemented over the past five years have minimised casualties, averaging two to five deaths a season – with no deaths in 2019 so far.

Such measures include climber check-in and medical checks at ranger stations, and the availability of doctors and rescue teams up to 5,500m. Our interviews with rangers, guides and porters reveal that accidents are associated with an high number of inexperienced climbers who often carry insufficient equipment and underestimate the difficulty and risks of a high-altitude mountain environment. The question is, should everyone be allowed to climb any mountain they decide to?

Many recreational mountaineers opt for package expeditions, relying solely on the experience of service companies and the help of porters and guides. Without this professional support, they would fail. The paradox of modern mountaineering is that the provision of necessary expedition support and all-inclusive packages also encourages inexperienced climbers who wish to reach the desired summit at any cost, putting others at risk.

Of course even the most skilled mountaineers need logistics and local support on the world’s highest peaks. But experienced climbers possess the knowledge, skill and strength to reach the summit – and often rely on themselves as far as possible. But their achievements, together with the “all-inclusive” adventure tourism industry, lull inexperienced climbers into a false sense of security about what they are capable of.

Each country manages climbing permits in different ways – and only a handful of authorities check mountaineering experience seriously. To climb Alaska’s Mt Denali (6,190m), the highest peak in North America, climbers are required to have advanced mountaineering skills along with backcountry winter camping experience.

Only seven mountain guide companies are authorised to lead expeditions on Denali and solo climbers need to prove their mountaineering experience to obtain a climbing permit. This strict control minimises the risks to climbers and the impact on the environment, allowing sustainable management of expeditions without casualities – which was achieved in 2018.

Other countries have much looser requirements. The New York Times reported that to get a climbing permit for Everest all a climber has to do is submit a copy of their passport, limited biographical data and a certificate of good health.

Climbing a mountain is mentally and physically demanding. Climbers need to have good ethics – such as taking responsibility for their actions, respecting local climbing traditions, taking care with the environment and so on – proper equipment and real mountaineering experience. In our view high-altitude climbers should be required to demonstrate a standard of experience to obtain a permit. But mountaineering is a lucrative industry and brings huge amounts of money to often impoverished local economies. Over the years, overcrowding and safety issues have become a serious problem.

Mountain tourists lack the experience and the requisite attributes to summit difficult peaks. This foolhardy arrogance can lead to tragedy, as we saw on Everest this year. The global mountaineering community needs to call for specific conditions of ability and experience be met when issuing permits for high-altitude mountain expeditions. It has to be about more than simply being able to afford to take on the world’s most difficult peaks.

But how do we achieve that? Who is responsible for managing modern mountaineering in a safe, responsible and sustainable way? If we don’t address these issues, avoidable tragedies caused by commercialised mountaineering will continue to appal the world. From the Conversation