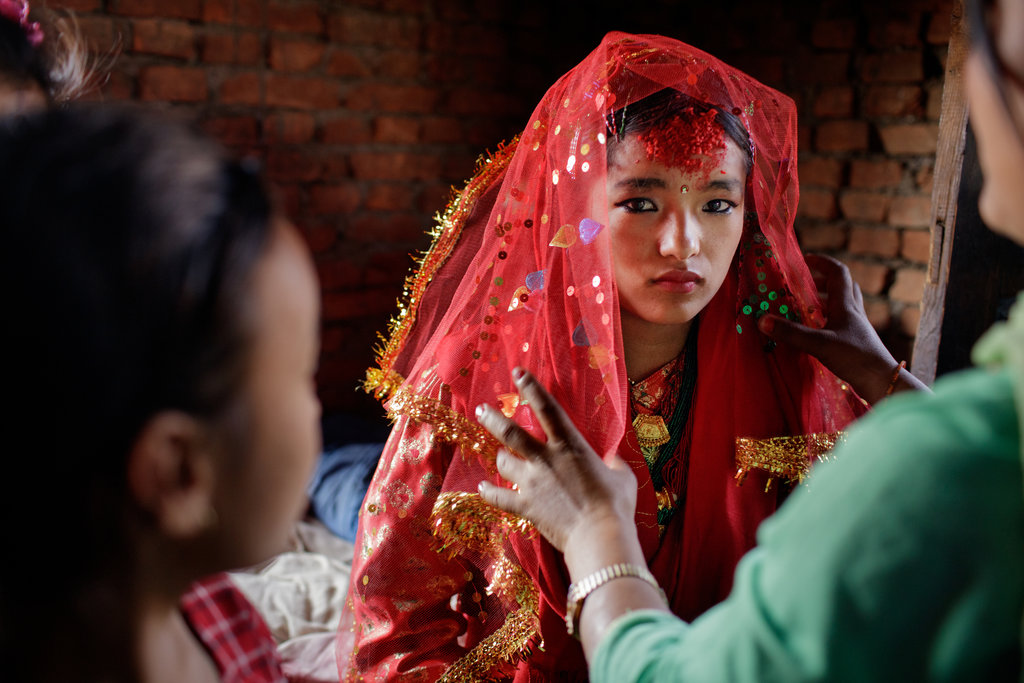 According to Unicef, about 765 millionpeople alive today were married as children, and Nepal has some of the leading rates of such marriages. Child marriages are harmful to both boys and girls. It puts girls at higher rates of social isolation, domestic violence, limits their education, and in some cases prevents vocational advancements. Less research has been conducted on the impact of child marriages on boys, but the practice typically puts economic pressure and responsibility on boys not ready to handle such situations.

Human Rights Watch reports that “thirty-seven percent of girls in Nepal marry before age 18 and 10 percent are married by age 15“, meaning nearly 50% of all wives in Nepal were married before the legal age of 20.

Child marriages are commonplace in Nepal, stemming from a variety of factors such as poverty, lack of access to education, child labor, and social pressures. Since the introduction of mobile phones and social media, it has become even easier to find prospective child partners.

Many in Nepal do not see child marriages as a problem, so officials have a hard time changing people’s attitudes. One member of Nepal’s child welfare board said, “They do not see that child marriage destroys their futures. It is a kind of violence.”

In recent years, the government has taken strides to prevent and limit the number of children subject to this systematic violence. The government raised the age for women to marry to 20 years old, raising the requirement by two years to match the age requirement for marriage for men. The New York Times reports that officials announced in January cash incentives and bicycles for families who kept their daughters in school. The country has also vowed to eradicate child marriage by 2030, even sooner in some districts.

However, these initiatives have had limited success. Officials say part of the problem is the labor attitudes that exist in Nepal. Every year, poorer families send thousands of men to work in construction jobs in the Persian Gulf area. When these men leave, villages need women and girls to take care of the elderly and handle household activities.

As soon as girls start to menstruate, they are taken out of school, since their families believe menstruation is a sign that a girl is ready to be married. These unions come with an illegal dowry, and in some areas, the dowry increases as a girl gets older.

Without a doubt, child marriages are human rights issues that must be addressed. Barely pubescent girls forced into a life-time decision against their decision strips away their agency, ability to receive an eduction, and childhood. However, eradicating child marriages is a complicated issue. In Nepal, the practice is engrained into society, and many do not see the practice as problematic. The practice is seen an an economic necessity and a social practice. To change this would mean having to change an entire societal mindset. Going forward, international activists must be cognizant that child marriages are the accepted social norm, and must be careful in their attempts to revolutionize the attitude towards child marriage. Recognition from some Nepalese officials that child marriage is an issue is a large step forward on the issue, but changing this societal mentality from a top-down structure will not suffice. To a reasonable extent, child marriages are a result of economic pressures and lack of a strong education system. If these areas can be addressed, people may be less inclined to forcing their children into marriage and more inclined to educate their girls. Child marriage in Nepal does not exist as a singular issue but rather as a result of a myriad of issues in the economy, social attitudes, and living conditions.

Child marriages in Nepal are a common practice, increasing in number even as the global rate for child marriages is dropping. Families feel economic pressure and social urgency to marry their daughters, depriving girls of education and workplace advancement. However, this human rights abuse, like many other human rights abuses, is part of a larger economic, social, and political problem in Nepal. In order to decrease the rate of child marriages in Nepal, the issue must be dealt with both directly and indirectly.

(From : The Organization for World Peace)