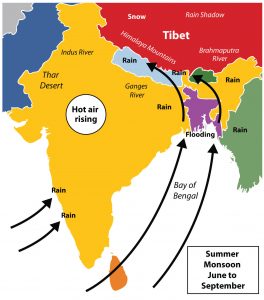 Physicsworld: The South Asian summer monsoon – the region’s primary source of water for agriculture – is predictable more than one year in advance, according to a scientist in the US. Monsoon rainfall is variable, and comparatively dry years can have devastating consequences for farmers.

“South Asian monsoon prediction has been a challenge that has exercised scientists for over a century, and has also led to much frustration, as some of the adopted methods have turned out not to work well,” says hydrologist Nir Krakauer of the City College of New York. “My research confirms that the monsoon is partly predictable, in fact well in advance, so that the effort to refine prediction methods and find ways for them to be usefully applied is probably justified.”

Krakauer compared different statistical methods for forecasting rainfall based on sea-surface temperatures. Predictions that are significantly better than chance can be made a year or more before the monsoon season starts, he found.

Today, monsoon predictions are typically made only up to three months in advance, says Krakauer.

“Better monsoon prediction at longer lead times could help farmers to make decisions about what to plant and what supplies to buy, as well as help governments trying to support them,” he adds. “They could also help, for example, reservoir managers decide how much water to release before the monsoon.”

In recent years, researchers have recognized the upper ocean’s heat content as the leading predictor of monsoon rainfall. But while they’ve constructed various statistical predictive models, says Krakauer, there have been few systematic comparisons to determine how far in advance the models can be applied.

Krakauer trained the models on data from 1901–1996, and tested them on data from 1997–2017, comparing them with an average climate baseline. Although the non-linear model was better, both models outperformed the climatology baseline at least one year ahead when considering precipitation in 0.5° grid spacings over South Asia.

Still, farmers don’t only care about levels of monsoon rainfall – they also mind when that rainfall comes. “I’m interested in whether it’s possible to predict the monsoon timing in addition to the total amount of rainfall, which should make this work more helpful for farmers,” Krakauer says.