Interview : ‘Love of Nepal and its people is my main motivation’ – Dr Tim Mitchell 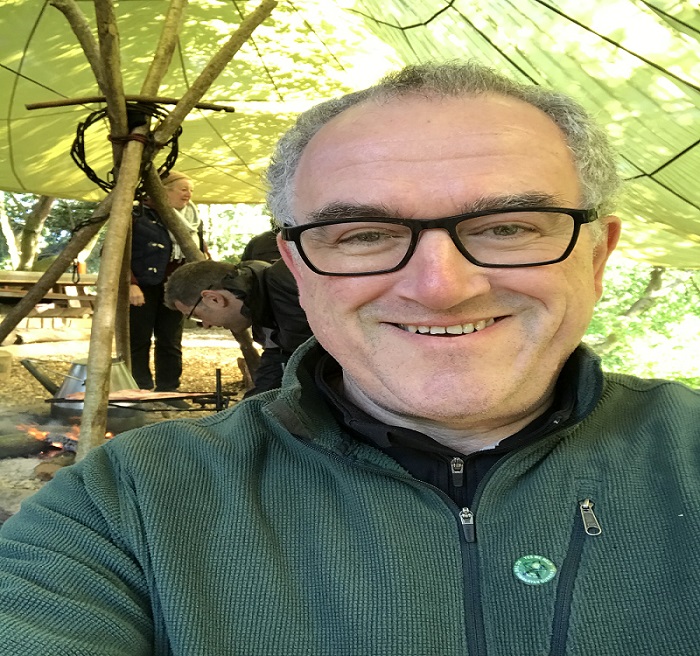 TIM MITCHELL was born and brought up in Ballymena, Northern Ireland, and went to University of Bristol to study medicine. In 1978 he took a short service commission in the Royal Air Force initially as a medical cadet before active service from 1980 to 1986. In the RAF he completed his postgraduate GP qualifications and the highlight of his service was two years in Hong Kong. Whilst there he was seconded to the army, serving as regimental medical officer to the Queen’s Gurkha Engineers. From there he spent time working in Nepal, Brunei and Papua New Guinea. Returning to UK in 1986, his commission finished and he became a partner in Montpelier Health in Bristol and is still working as a GP. He joined Rotary International and became involved with Pahar Trust Nepal in the 1990s and continues to be active in both organisations becoming President of the Rotary Club of Bristol and also Chair of Trustees of PTN in 2019.

Dr Mitchell spoke to SOUTH ASIA TIME on his recent election as Chair of the Pahar Trust Nepal (https://www.pahar-trust.org/)  and his priorities. Excerpts of the Interview:

As the new Chair of the Pahar Trust Nepal, what will be your priorities?

We need to recognise that the Trust has achieved a tremendous amount in the past 25 years with very few resources and celebrate that whilst recognising that the next 25 years will bring different challenges. My priorities will include building on the good start made in establishing our NGO in Nepal. We need to broaden the Board of Directors and look to the specific skills we need to gain recognition in Nepal and develop a culture amongst those who are doing well to give back to their communities. At present the vast majority of the fundraising is carried out outside Nepal and this needs to change. At the same time we need to look to our own board of trustees and the skills we need to progress as a charity in a very competitive world. We have relied on individual and group donors and need to develop expertise in fundraising and grant applications. 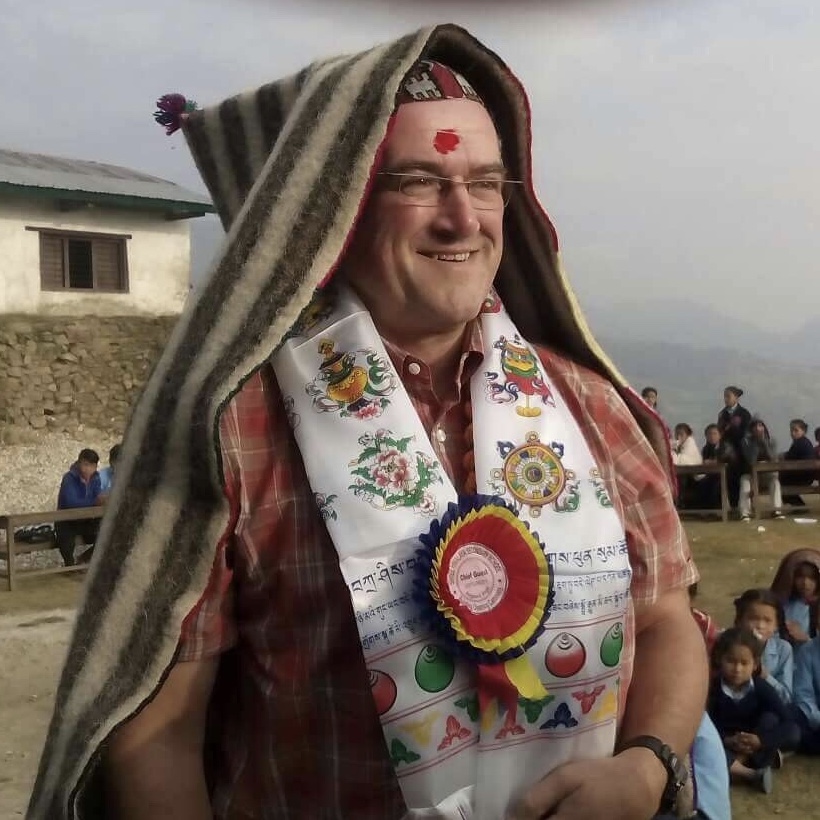 So, how would you like to recollect the 25-year-long remarkable journey of the Trust?

It all started with individual enthusiasm which is still carried forward into today’s team. It was only relatively recently that costs have escalated beyond the scope of holding a single charity event and funding a school. We tapped into the incredible goodwill towards the Gurkhas long before the excellent campaigns to improve their rights and equality as soldiers and veterans. The majority of our projects were brand new schools built where students of all ages might have been expected to walk for three hours just to get an education and this was a relatively easy sell when motivating potential donors. I became involved about 4 years after the charity was registered and my own early memories focus on taking a primary school group to visit a very isolated school in Lamjung. Singdi was, at that time, a good 3 day walk from the nearest roadbed so we camped or stayed another schools on the way. We immediately felt the warmth of the welcome and hospitality I still experience today.

Could you tell us about your first and last visit to Nepal? How much things have changed or not over these years?

I first visited Nepal in 1984 to work in the British Military Hospital in Dharan as part of my career in the RAF medical branch. Based in Hong Kong I had the amazing experience of acting as Regimental Medical Officer to the Queens Gurkha Engineers and had already developed an admiration and love for the Nepali people. To see where they came from was a real privilege. I only had two weeks in Nepal but was involved in running the ‘village outpatients’. This was not for the military personnel in Nepal but for anyone who could make the journey to the hospital to seek treatment. It would take too long to cover the breadth of the medical conditions I saw. TB became a common complaint, leprosy as well. The fortitude with which the patients coped with the long trek to the hospital and then the treatment necessary to recover before returning home was humbling. One example stays with me. A 10-year-old boy had fallen out of a tree and walked for three days with his father to seek our help. He had broken both wrists and fractured his skull but made a full recovery. Words still fail me to try and explain how it felt to meet patients like him.

I had one day off when I could leave the hospital and trekked up into the first of the foothills from Dharan. This took me higher than anywhere in the UK and the views the next morning were stunning. As the sun came up I saw range after range of mountains towards the horizon and, as the morning mist cleared, thought I could see the moon floating above them. The sun came up turning everywhere pink and I soon realised that I was looking at Everest. If I wasn’t in love with Nepal and its people before that I certainly was after then.

My last visit to Nepal was in April this year. These days it is much more about the people for me, especially as I revisited communities I have known since 1999. There is genuine warmth to the welcome I get and far too many garlands! Over the years I have come to realise that they will make the most of any opportunity we offer them. Nepal has itself, of course, changed – better infrastructure and a feeling of potential for the future. The better road network makes it much easier to move goods and people around but it is still wonderful for me to me able to step away from the roads, use the old paths take in the views and acknowledge how much I have gained from our work in Nepal.

How difficult it is to implement a project like school building in     Nepal? Could you share your experiences including after the 2015 earthquake?

For many years, it was quite simple to implement a school project. We were approached by communities who either needed an old school building replacing or a school where there never was one before. It has always been our approach to make sure the community was committed to supporting a school and making it a real asset for all for years to come. Once we felt this we found willing donors and built the school. As long as we were replacing an existing school or building one where there was agreement over the need (often judged by time to walk to school – over 3 hours was the cut-off!) the government picked up the ongoing salary and other costs. We have always stayed in the state education sector and this became more important after the 2015 earthquakes. Combined with newer regulation around schools we are now much more closely linked to the Social Welfare Council (SWC) to ensure our projects are in areas of need – this is not too difficult given the 2-3000 schools yet to be replaced after the earthquakes, but it has taken us to areas we aren’t so familiar with and that are more difficult to access. Costs have gone up for many reasons so the main difficulty is in finding donors who can raise £50-£60k for a school as opposed to £10-£20k a few years ago. We need to develop our own skills and resources to be able to approach larger funding organisations and to increase in-country fundraising in Nepal itself.

I think this is an essential part of a future PTN. We are already working on plans to use Education improvement workers to collect data on school performance and look at teacher development. Some of our schools are in the top ten in Nepal’s state sector so we need to share what they are doing with the less well performing schools. I will be looking to form partnerships with education experts and build on our existing links with Global Action Nepal who already run some training programmes for us.

Most of the projects you have completed seem to be located in eastern and western hills? Do you have plans to implement new projects in far-western and southern Nepal also?

PTN has traditionally worked in areas from where Gurkha soldiers were recruited but we are already extending ourselves into areas affected by the 2015 earthquakes. We are named after the Pahad or central hill region of Nepal as opposed to the plains area of the Terai or the more mountainous region of Himal. There are no plans to work in the Terai and we would find it a logistical challenge to work in the far western areas although the needs are great in that region. It would be also much more expensive due to its remoteness and I am not sure how much government support there would be to ensure sustainability of any new schools.

How would you like to recall the contributions of outgoing Chair Howard Green and other Trustees of the PTN ?

The PTN would not be in existence today if it were not for the dedication and devotion of Howard Green and his wife, Sue, who was also a Trustee. Howard was, in effect a CEO, not just Chair of Trustees and I certainly could not have contemplated taking over as Chair is we hadn’t have decided to have a paid executive director to handle more of the day to day administration. I simply do not know how Howard and Sue fitted everything in. We are all so pleased that they are staying involved as Honorary Presidents so we can continue to tap into their educational expertise and knowledge of all things Nepali.

Last, not the least, could you kindly share with us what motivates you?

A love of Nepal and its people is my main motivation. I also benefit greatly from the chance to do something different from my day job – I can truly switch off and relax in Nepal. Finally, I take great pleasure in enthusing others to come and experience Nepal, help raise funds and to join us in feeling that they have made a difference.