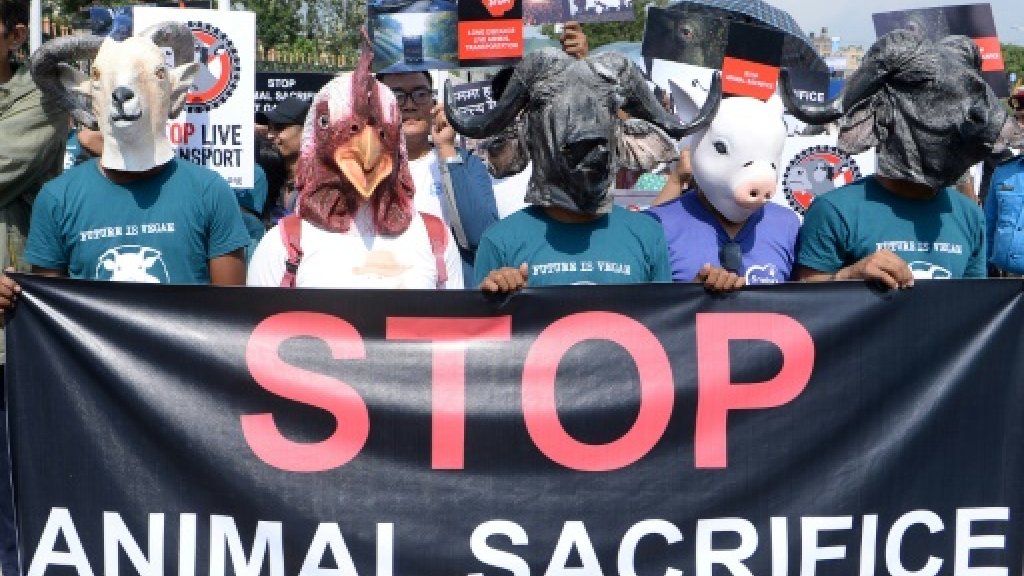 AFP, Kathmandu — Nepali activists rallied in Kathmandu on Friday calling for an end to religious animal sacrifices, months ahead of a festival that in the past has seen tens of thousands of animals slaughtered.

Some of the more than 100 protestors wore fake buffalo, pig and chicken heads, as they chanted against a practice deeply rooted in the country’s Hindu traditions.

“This is wrong and must stop,” Sneha Shrestha of the Federation of Animal Welfare Nepal told AFP.

“We are all equal in God’s eyes, God will not ask for (the) sacrifice of her own children.”

Animal rights campaigners face an uphill struggle in Nepal, where Hindus make up 80 percent of the population and where ritual sacrifice is a part of everyday life and central to major festivals.

Placards at the protest also called for a halt to sacrifices at Gadhimai, a festival believed to be the world’s biggest ritual slaughter.

Once every five years, the tiny village of Bariyapur near Nepal’s border with India flows with blood, as thousands of Hindu devotees flock to its temple to honour Gadhimai — a Hindu goddess of power.

The temple’s head priest begins the centuries-old festival with the ritual sacrifice of two wild rats, two pigeons, a rooster, a lamb and a pig before tens of thousands of animals are killed.

Although the temple banned the practice under huge pressure in 2015, activists fear sacrifices will still be held at the next festival, due in November.

During the two-day festival, worshippers from Nepal and neighboring India spend days sleeping out in the open and offering prayers to the goddess at the temple.