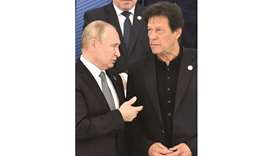 Internews/Bishkek — Pakistan Prime Minister Imran Khan has said that enduring peace and prosperity in South Asia will remain elusive until the main dynamic in the region is shifted from confrontation to co-operation.
He was addressing the 19th meeting of Shanghai Co-operation Council (SCO) Council of Heads of State in Bishkek, Kyrgyzstan.
The prime minister said that South Asia continues to be challenged by common enemies, including poverty, illiteracy, disease, and under-development.
Khan said that political differences and unresolved disputes further compound the predicament.
He said that it is important to seize the opportunities for peaceful resolution of outstanding disputes and collective endeavours to ensure regional prosperity.
The prime minister said that Pakistan condemns terrorism in all its forms and manifestations, including state-sponsored terrorism against people under illegal occupation.
Khan said that Pakistan is among the few countries to have successfully turned the tide against terrorism, and added that Islamabad remains ready to share its experience and expertise to counter the threat.
“We will also remain actively engaged in the SCO’s counter-terrorism initiatives,” he said.
Referring to the Afghan issue, the prime minister said that there is finally a realisation that the conflict in Afghanistan has no military solution.
Khan said that Pakistan is fully supporting efforts for peace and reconciliation, through an Afghan-led and Afghan-owned process.
He said that Pakistan deems this to be part of a shared responsibility and, therefore, appreciates the positive contributions being made by China, Russia, and Afghanistan’s immediate neighbours.
Khan said that the SCO’s support for post-conflict Afghanistan will remain crucial.
Expressing concern over evolving situation in the Gulf and Middle East, the prime minister said that Pakistan joins SCO members in urging the parties to exercise restraint, take steps to de-escalate the situation, and find solutions through diplomatic means.
He said that Pakistan believes that the implementation of the Joint Comprehensive Plan of Action by all parties is essential for international and regional stability.
The prime minister presented an eight-pronged course of action for the SCO on the turf of international politics.
He said that all nations should reinforce the vision of co-operation, that rejects confrontation, and advance the imperatives of peaceful co-existence at the regional and international levels.
Khan also urged SCO members to galvanise the “Shanghai Spirit” to strengthen the SCO’s core mandate of mitigating the risks of conflict, fostering confidence, and promoting stability.
He said arrangements need to be finalised for trade in local currencies, and for the SCO Fund and SCO Development Bank to be set up to catalyse the trans-regional development agenda.
Khan said that the SCO member states need to synergise the various region-wide connectivity initiatives, and work on complementing infrastructure connectivity with soft connectivity, and make the SCO more relevant to the daily lives of citizens by promoting food security and enhancing co-operation in health and humanitarian sectors.
The prime minister said the SCO should take the lead role in establishing a comprehensive framework for combating corruption and white collar crime, prioritise women and youth empowerment by focusing inter-alia on strengthening the Women Forum and the Youth Council and mandating them to promote gender mainstreaming, skills acquisition and jobs mobility, and bridge the gap between region- specific research and policy by launching feasibilities for creating SCO Centres of Excellence on Poverty Alleviation, De-Radicalisation, Connectivity, and New Technologies.
On the sidelines of the SCO meeting, Prime Minister Khan met Chinese President Xi Jinping for discussions on bilateral, regional and multilateral issues.
On Twitter, a Foreign Office spokesman said both sides reaffirmed their commitment to further deepening the Pakistan-China All-Weather Strategic Co-operative Partnership.
Khan reiterated Islamabad’s resolve to ensure early completion of China-Pakistan Economic Corridor (CPEC) projects.
Xi expressed appreciation for Pakistan’s measures against terrorism and acknowledged efforts for regional peace and stability.
Both sides decided to enhance the depth and breadth of co-operation at all levels.
On Thursday, Prime Minister Khan met Kyrgyz President Sooronbay Sharipovich Jeenbekov and agreed to strengthen land and air connectivity between the two countries.
The leaders also reviewed bilateral relations and agreed to comprehensively upgrade mutual co-operation in diverse fields.
Khan and Jeenbekov also agreed to enhance people-to-people contacts and boost tourism co-operation through friendly visa regimes.
Earlier, upon arrival in Bishkek for the SCO meeting, the prime minister was received by Kyrgyzstan PM Mukhammedkalyi Abylgaziev and Health Minister Health Kosmosbek Sarievich Cholponbaev.
Later, Khan met Russian President Vladimir Putin during a dinner hosted by Jeenbekov in honour of the heads of the SCO.
During the dinner, the prime minister and Putin shook hands and shared pleasantries.
Since becoming a member of the SCO in 2017, Pakistan has been actively participating at all levels in various SCO mechanisms, including foreign affairs, defence, national security, economy and trade, science and technology and innovation, youth and women empowerment, tourism and media.
Besides Pakistan, the SCO’s members are China, Russia, India, Kazakhstan, Kyrgyzstan, Tajikistan, and Uzbekistan.
SCO observers are Afghanistan, Iran, Belarus, and Mongolia.