Climate change might devastate South Asia instead of war 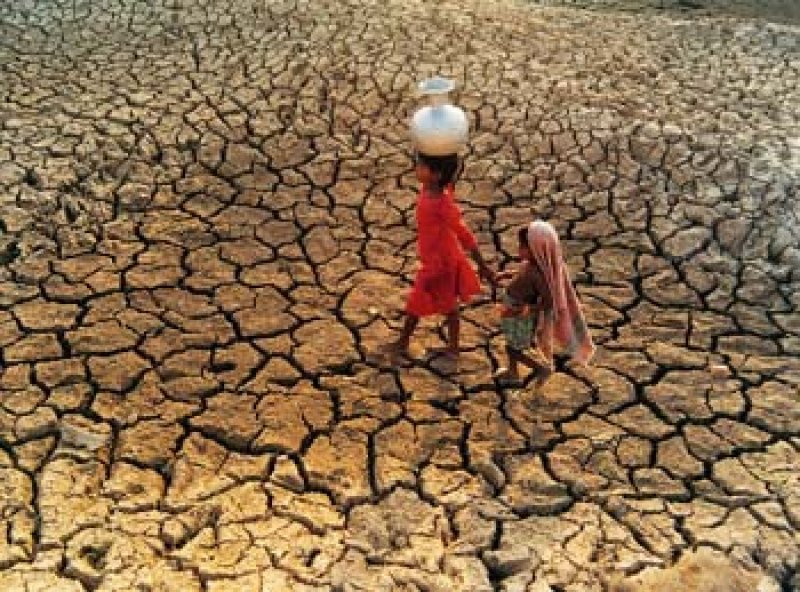 The Indian capital has been having a heat wave straight from hell. The desert nearby which had been protected by the Aravalli mountains seems ever so close by—with each passing day one more bit of the Aravalli range is destroyed to build another ugly condominium.

The United Nations Climate Change Organisation says that by the end of this century climate change could cut up to 9% of the South Asian economy every year, and an Asian Development Bank (ADB) report entitled ‘Assessing the Costs of Climate Change and Adaptation in South Asia’ predicts that by 2050, the collective economy of six countries—Bangladesh, Bhutan, India, the Maldives, Nepal, and Sri Lanka—will lose an average 1.8% of its annual gross domestic product; by 2100, the loss will be 8.8%.

Of the 10 most polluted cities in the world, seven are in India and two in Pakistan, according to the World Economic Forum. Both India and Pakistan have floods and droughts from time to time.

India and Pakistan are the two largest nations in the region. They are also the most affected by climate change. But this is a problem that no state in South Asia can solve on its own. Fighting climate change by its very nature is a multilateral task.

The crisis that the region faces is under-appreciated by both governments and people. Global climate change (GCC) is likely to increase food demand by around 300% by 2080 because of higher population, higher income, and demand for bio-fuel; and this rise is likely to create an imbalance between food supply and demand even without the effects of GCC and, as is expected, if there is a decline in food production due to GCC, it is likely that there will be more crises over food supply and demand, and a relentless rise in prices, threatening food security.

This is a catastrophe because across South Asia, climate change will impact agriculture, which in turn will affect efforts to reduce poverty. Recent global food crises in 2007 and 2008 have shown us that it is populations in developing countries, which are already food insecure and vulnerable to shortfalls, that are most likely to face a crisis when climate change impacts agricultural production.

Many institutions including the World Bank believe that South Asia would be one of the most affected areas due to GCC. In 2013, the World Bank noted that ‘‘in the past few decades a warming trend has begun to emerge over South Asia, particularly in India, which appears to be consistent with the signal expected from human induced climate change’’. This region is likely to face a warming of around 0.016 °C and 1.0 °C.

“In some parts of the region, summer temperatures are projected to increase by 3°C–6°C at a scenario of 4°C global warming and by 2°C at a scenario of 2°C global warming by 2100… In almost all countries in South Asia, with a few exceptions related to some crops, food production as of 2030 is expected to decline by up to 4%, 11% and 7% for rice, wheat and cereal grains, respectively, due to climate change-induced land productivity change compared with the baseline food production,” it added.

A World Bank report in 2013 noted that “rice and wheat yields in Asia had declined since the 1980s by approximately 8% for every temperature increase of 1 °C… [and] highlighted the impact of climate change on the rice-wheat system of the Indo-Gangetic Plain which covers large areas of India, Pakistan, Bangladesh and Nepal and observed a decline in rice and wheat productivity”.

Most Indians and Pakistanis—indeed perhaps most South Asians—do not realise that there is most likely a greater number of poor people living in the Ganga-Brahmaputra-Meghna basin than the whole of Sub-Saharan Africa (around 40% of the developing world’s poor people with a daily calorific intake of less than 2200-2400 kcal, live in this region), and therefore the main countries in this basin, India, Bangladesh and Nepal, have no choice but to cooperate.

The two countries which can show a positive path in this are India and Bhutan where cooperation on water has been a norm rather than an exception.

In the 1980s, Bhutan realised that it needs to use its most precious natural resource, water, for its development, and this can most efficiently be done with its much larger neighbour, India. Along with India’s help, the Himalayan kingdom built the Chukha dam which was so successful that it covered its costs by 1993. Bhutan agreed to sell excess electricity generated from the dam, which it didn’t need for its own use, to India and earnings from the sale of power has been enough to maintain the project. This arrangement has been beneficial to India too whose energy needs have been rising at 7%-9% a year. Since then the two countries have collaborated on a host of other hydroelectric projects who have given Bhutan, a country of only around 2 million people, sustainable sources of income.

In sharp contrast, an incessant air of suspicion of a ‘big brother-small brother’ temperament between India (‘big brother’), Bangladesh and Nepal have prevented the settlement of the transboundary waters shared by the three countries. Clouds of suspicion between the partners have continued to derail conclusive settlements, including between India and Bangladesh on the Teesta river waters. India and Pakistan have an underappreciated Indus Water Treaty which is a marvel of international diplomacy but barely championed at home.

The idea of national security purely on material and military terms is an archaic framework and in the aftermath of the Cold War, the term security is a far more contested idea with multiple sources or sites of contestation including transborder or boundary ideas like climate change and environmental security.

Environmental security is by its very nature a transnational context concerned as it is with issues like resource depletion, transborder pollution, and global warming.

For instance, the India-Pakistan conundrum each winter of crop burning and extreme air pollution fits neatly into environment security expert Simon Dalby’s words: “…how these [environmental] issues are described and who is designated as either the source of the problem, or provider of the potential solution to the problem, is an important matter in how themes are argued about and in who gets to make decisions about what should be done by whom”.

For instance, while the elite in Indian and Pakistani cities lament the crop burning in the fields far away from their playing grounds affecting their health, it would be pertinent to see why farmers are burning the crop and whether there has been any attempt to provide better mechanisms at cost effective rates to them to tackle the problem.

There is another sub-context that is impossible to avoid especially in the Pakistani situation which the Pakistani army is undoubtedly the most powerful institution in the country: “Given that `security’ frequently has a military ring about it, the adoption of environmental security agendas may lead to the further militarisation of environ- mental issues, thus making the agenda vulnerable to manipulation by traditional national security constituencies, especially the military”.

Climate change is also affecting the region in spotlight these days—the Indian Ocean Region (IOR). With low per capita income and low development, the IOR has been described as the ‘Heart of the Third World’ and it is now at the heart of a new competition between India and China for supremacy in its waters with many other players from the U.S. to Australia and Pakistan playing their part.

The Indian Ocean region has two-thirds of global oil trade and one-third of global cargo trade passing through it and faces multiple trans-border security challenges—from “piracy; armed robberies at sea; terrorism; trafficking in narcotics, arms and people; illegal fishing; and the dangers posed by natural disasters and climate-change”.

This region produces around 6 million tonnes of marine produce and has one of the largest concentrations of fisheries workers in the world. Climate change and strategic competition in these waters, alongside tremendous and unsustainable demand for marine products are devastating these waters to the detriment of every country which shares them. For instance, shrimp aquaculture is a prime example of Indian Ocean communities are increasingly insecure. With the development of modern industrial aquaculture, which is a multinational, multi-billion-dollar industry, many coastal farmlands and mangroves have been converted to aquaculture farms. The rapid depletion of such resources through aquaculture has impoverished many a village in South India.

In fact, the impact of climate change might fundamentally alter the shape and size of South Asia itself as an island nation like Maldives today has reason to fear that by 2100, if sea levels rise by 20 inches or more, large tracts of the island itself would disappear, turning many of its less than 300,000 people into eco-refugees.

The crisis of environmental security that South Asia faces today gets far less attention than traditional concerns of security of borders or territory. But the impact of climate change and pollution has forced us to consider Lorraine Elliot’s definition that human security (caused by environmental and other kinds of equity crisis) must be taken into due consideration: “If peoples and communities are insecure (economically, socially, politically, environmentally), state security can be fragile or uncertain. Environmental scarcity becomes a distributive equity problem rather than one simply of market failure, externalities or zero-sum calculations about access to resources and environmental services.”

Even though most researchers agree that environmental and human security crisis may not cause outright war between India and Pakistan or with/between other countries in the South Asian region in the near future, there is little doubt that such tensions will keep rising.

( This article was originally published in Fortuneindia)