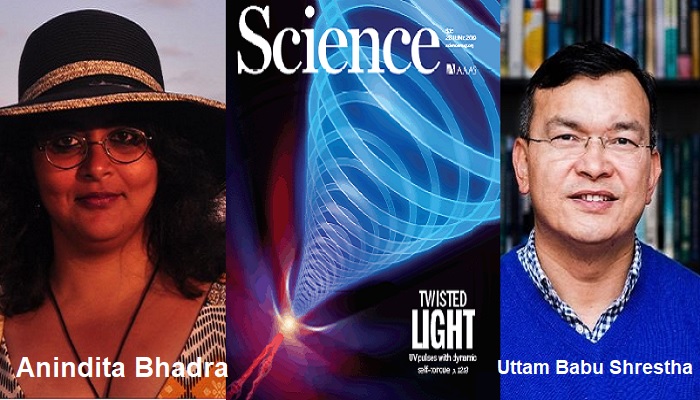 Writing an editorial in the Science magazine, Uttam Babu Shrestha and Anindita Bhadra said previous attempts to foster regional collaboration in South Asia have not been fruitful. They have also called upon South Asian scientists to use collaborative research not only to tackle regional problems but also to encourage a parallel path for improving diplomatic and political relations among countries.

Regarding their  recent publication the author duo has expressed their reaction through social media  :

Full editorial text from the Science :

South Asian countries are often at odds with each other for political, economic, and emotional reasons. The conflicts are a frustrating contrast to the promise of the region. Covering only 3.5% of Earth’s landmass, but inhabited by 23.7% of humanity, the region has the highest rate of economic growth, is rich in knowledge-based institutions, and is home to many indigenous and technological innovations. Sadly, at the same time, South Asian countries have the highest poverty rate, lowest human development index (except for sub-Saharan Africa), the most polluted air, the greatest burden of diseases, and increased vulnerability to climate change. It’s time to reinvent science diplomacy in this part of the world to spur collaborations that can help resolve conflicts that are preventing South Asia from achieving its potential.

Science diplomacy has a long history as a catalyst to promote scientific discourse that unifies researchers across borders despite political hostilities among nations. American and Russian cooperation in space science in the Cold War era, collaboration between Cuba and America on health research, and operation of the South Asian University since 2010 are examples of science diplomacy’s successes. South Asian scientists should carry this tradition forward and use collaborative research not only to tackle regional problems but also to encourage a parallel path for improving diplomatic and political relations among countries.

Previous attempts to foster regional collaboration in South Asia have not been fruitful. The South Asian Association for Regional Cooperation (SAARC), for example, was created in 1985 to promote friendship and cooperation between the SAARC nations. Regional Centres for agriculture, energy, public health, and disaster management were created under SAARC. Unfortunately, these Centres have failed to foster regional cooperation in science. Of the 1.2 million publications by South Asian scientists from 2008 to 2017, only 1.3% were jointly produced, most of which lacked regional perspectives. This is not surprising, because a regional mechanism for sharing information is generally absent. Similarly, countries have failed to harness the potential of the 2017 South Asia space satellite GSAT-9 and have not shared each other’s independent lessons and achievements across other sectors. Successes in community forestry in Nepal, and changes in energy and resource use in Bangladesh, remain unreplicated. There is, essentially, no unifying South Asian scientific enterprise.

Supporting scientific collaborations in South Asia that address shared challenges will require several approaches. Governments should establish a regional funding mechanism similar to that of the South Asian University to fund collaborative research, scholarships, fellowships, science ambassadorships, and faculty exchange programs. Also, national academies should build the capacity of young scientists in science diplomacy and increase the scientific literacy of policy-makers and diplomats. This idea could be discussed at regional or bilateral meetings. Conventionally, researchers in this region are accustomed to collaborating outside of South Asia. Therefore, universities and research institutions should develop incentives to promote research within South Asia in areas of shared relevance, such as climate change, pollution, biodiversity loss, disasters, sustainable energy, and public health. The donors and development partners of the SAARC countries should encourage regional collaborative research through financial and technological support. Furthermore, the regional mobility of scientists should be enhanced by facilitating the granting of a “scientific visa” (the existing SAARC visa exemption scheme does not include scientists). And scientific communities beyond South Asia’s boundaries could help to fortify regional chapters, networks, and working groups. A working group at the Global Young Academy called Science Diplomacy in South Asia is such a bottom-up network of early-career scientists that hopes to spur and strengthen regional collaborations through science diplomacy.

There is no dearth of ideas to improve scientific collaboration among South Asian countries. Hopefully, these ideas will spark new ways to stabilize the region overall, to the benefit of the global society.

( This article was originally published in “The Science”)