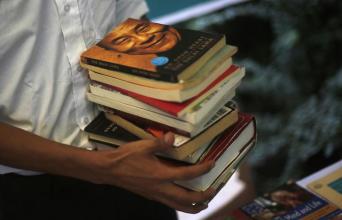 IANS , New Delhi/Kathmandu: Even as Indian publishers are grappling with a budget proposal of 5 per cent customs duty on imported books, in neighbouring Nepal a 10 per cent duty on imported titles has left publishers, booksellers and students reeling, as Kathmandu imports over 80 per cent of its books from India.

A few days after the Nepal government on May 29 announced a 10 per cent duty on imported books, publishers stopped picking up books at the Nepal customs point in protest and have demanded that the move be rolled back. With no text books coming in to Nepal, the student community has been affected the most, say publishers.

“Around 80-90 per cent of books in Nepal are imported, and most of it from India. Now the students, including those in Classes 10 and 11, are not getting text books on time. The National Booksellers’ and Publishers’ Association of Nepal (NBPAN) has decided not to import any books in protest. We import 90-95 per cent of academic and text books from India,” a noted book seller in Kathmandu told IANS on phone, declining to be named.

According to Madhab Maharjan, Advisor to NBPAN and owner of Mandala Book Point in Kathmandu, the 10 per cent customs duty will attract other taxes, like the cost, insurance and freight tax and other charges, further pushing up the price of imported books.

Books all over the world are sold at the printed price. With the customs duty and the added charges, it is going to be difficult to sell imported books to academic institutions, libraries and students,” Maharjan told IANS over phone from Kathmandu.

He said they have requested the KP Sharma Oli government to remove the tax. “We have a long tradition of importing books from India. Religious books were imported from Benaras in the 20th century. Now the import of books is restricted to New Delhi,” said Maharjan, adding that scholars, academics and experts are raising their voices in protest against the move through the print and social media.

The 10 per cent tax will hamper the free flow of books and also affect the reading habit of students, says Maharjan. According to him, a Nepali journalist in an article in a local daily asked Finance Minister Yuba Raj Khatiwada, who is a PhD in economics, whether it was a theory of economics to impose the customs duty on books when the need was to improve the reading habits and culture of the people.

The reason for stopping the books at the customs point was because “as soon as we import we will have to increase the price, and secondly the old stocks have to be sold at the old price”.

“Thus there will be two prices of the book in one book store. This will create misunderstanding with students, readers, scholars, researchers and academics at large with whom we have to deal with everyday,” Maharjan said.

He added: “We do not want any one taking undue advantage of the situation, including politically motivating the students. Thus we have opted for this move not to import books till we come to a final decision.”

According to him, the onset of the digital era has hit book sellers and publishers. “There are not many book shops left, and with moves like this book sellers may not survive for long.”

Many Nepali publishers print their books in India and earlier would have to pay 15 per cent tax. “Now they are asked to pay 10 per cent duty on total imports. The earlier system was better to protect the local industry,” Maharjan said.

The number of students pursuing higher education in Nepal under Management, Humanities, Science and Education stands at around 400,000, and they would be directly hit by the duty on books imported from India.

According to Maharjan if India revokes the 5% duty on imported books the move “may help to revoke 10 per cent duty in Nepal too”.

KPR Nair, Managing Director Konark Publishers in Delhi, said Indian publishers are aware of the situation in Nepal and are trying to help. “They have asked for our help, and we are going to help them,” Nair, a veteran in the publishing industry, told IANS.