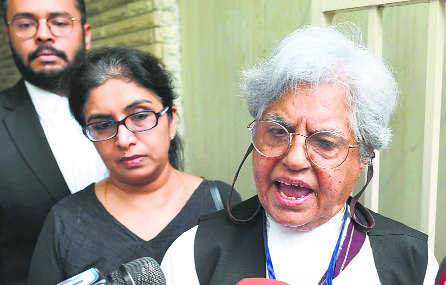 New Delhi: Senior lawyers Indira Jaising and her husband Anand Grover were raided on Thursday by the CBI, which has accused them of violating a law on foreign funding, NDTV reported.

Raids started at around 5 am at the home of Indira Jaising in Delhi’s Nizamuddin and the offices of Anand Grover’s NGO Lawyers Collective in Delhi and Mumbai. The CBI had earlier filed a case against Anand Grover and Lawyers Collective for alleged violation of the Foreign Contribution (Regulation) Act or the FCRA.

Indira Jaising and Anand Grover are among the most prominent faces of public interest and civil rights litigation in India and have been involved in path-breaking cases linked to gender justice, gay rights, labour and health care.

The CBI’s First Information Report, filed on the basis of a Home Ministry complaint, does not name Indira Jaising as an accused but the ministry reportedly referred to her alleged role.

The CBI’s case refers to a period when Indira Jaising was Additional Solicitor General between 2009 and 2014. The expenses of her foreign trips at the time were from funds of the NGO without Home Ministry approval, according to the investigating agency.

Indira Jaising says there is no conflict of interest; the Additional Solicitor General is a public servant, not a government servant, so is not banned from receiving foreign contributions.

Anand Grover and his NGO have been accused of misusing foreign contributions and spending the funds for trips abroad. The Home Ministry said it noticed irregularities in 2010.

The CBI also alleges that both lawyers organised “paid dharnas” using foreign funds, such as one for the HIV-AIDS Bill in October 2009, on which they claim Rs 89,000 was spent.

Mr Grover was one of the key lawyers in the landmark case in which homosexuality was decriminalised by the Supreme Court.

Over 20 lawmakers have written to Prime Minister Narendra Modi condemning the raids. “We, the undersigned individuals strongly condemn the raids… This, latest in a long line of coercion and intimidation of Ms Jaising and Mr Grover, is nothing short of a brute show of intimidation as well as gross abuse of power,” the letter read.

Delhi Chief Minister Arvind Kejriwal has also criticised the raids. “I strongly condemn CBI raids on well-known senior advocates @IJaising and Mr Anand Grover. Let the law take its own course but subjecting veterans who have all through their lives fought for upholding the rule of law and constitutional values is clear vendetta,” he tweeted.