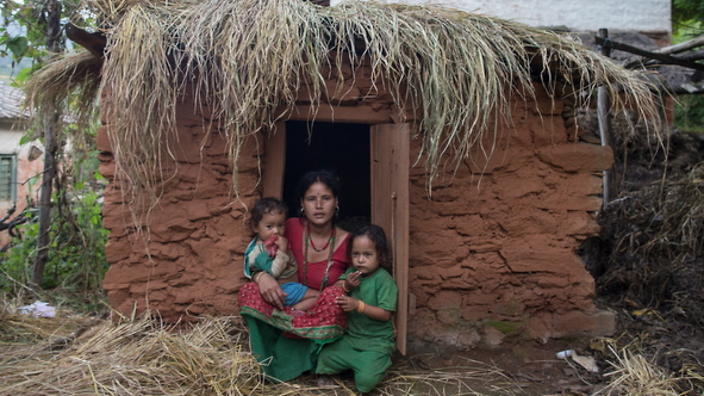 Today in Nepal, many women are subject to severe discrimination especially while they menstruate. A deep-rooted cultural belief that they are unclean and impure during menstruation has been pervasive in the country, leading to their isolation.

Young girls and women are forced to leave their homes and stay in secluded huts popularly known as Chhaupadi. This kind of treatment is a cultural custom in Nepal, and reflects the social stigma attached to menstruating that remains too common today.

But things are slowly changing in the country. The popular Bollywood film Padman, for instance, was inspired by activists who work to address this social stigma and to introduce low-cost sanitary products in India.

In Nepal, activist Gyan Maharjan is taking up the issue by attempting to change public perceptions. He hopes to help people understand that there is no impurity involved in menstruating.

Drawing inspiration from Padman, he decided to make reusable cloth sanitary pads for his community. A unique feature of these pads are their vibrant colours, intended to break the taboo surrounding menstruation and to celebrate womanhood.

Maharjan is advocating the role of women in society and is pushing for the facilities necessary to meet their needs. This is an attempt to change Nepali society by promoting menstrual hygiene and raising awareness.

It is high time for men to rise and take responsibility for a mindset that discriminates against women who are regularly considered untouchable and are deprived of basic hygiene and sanitation.

Having assisted the filming crew of a documentary on Nepali women rights, Maharjan had the opportunity to work closely with menstruating women, who he says were secluded and forced to stay in one corner of a dark room. Treated like untouchables for days, often women used unhygienic pieces of cloth to meet their needs.

With this passion, he also founded the Non-Governmental Organisation (NGO) X-pose in 2007 – an organisation that aims to expose and end violence faced by Nepali women.

The organisation started by distributing and making sanitary cloths, and is now training women to make the cloths with cheap and available fabric.

Maharjan visits schools, colleges, communities, and villages in order to change popular attitudes towards menstruation. This task has not been easy for him – or for women who are embarrassed to talk to anybody about the issue. Discussing such matters with men does not align with their cultural beliefs.

Nepal is highly patriarchal. Women struggle to find a voice and are subject to discrimination. Violence against women is a common phenomenon in the country.

Further, about a third of the population is still illiterate, making it difficult for people to understand the importance of proper sanitary products for women’s health.

It is time to end Chhaupadi. This custom can be phased out slowly through collective efforts. Incentives from governments, NGOs, media, and activists can create awareness to build a positive outlook amongst people about menstruation.

Society is beginning to accept change. With literacy rates going up, young Nepali girls are becoming more aware of their sexual and reproductive health. They are embracing change at faster rates than previous generations.

In 2017, a landmark decision in the Nepali parliament criminalised the tradition of isolating menstruating women. Perhaps more notably, the previously tabooed matter is now discussed openly. Nepal is on the verge of change.

The following year, for the first time in the nation’s history, a MenstruAction Conference was organised in its capital, Kathmandu. Experts debated and discussed women’s health issues and the social stigma attached to menstruation in Nepal.

During what was a breakthrough moment for the country, menstruation was openly discussed by both men and women. This reveals the growing national movement that aims to help women achieve their basic sexual and reproductive rights.

It is vital that men support women in this cause. We must all work together to change customs and traditions that degrade and abuse women.

Ending the taboo that surrounds menstruation is a crucial step towards progress in Nepal, and through collective efforts, there can be change.

This article was originally published on https://www.policyforum.net