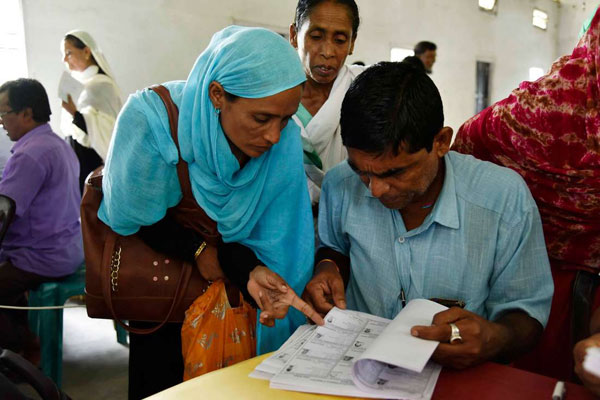 Almost two million people in northeast India were left facing statelessness on Saturday after they were excluded from a citizenship list aimed at weeding out “foreign infiltrators”, in a process the central government wants to replicate nationwide.

A total of 31.1 million people were included in a National Register of Citizens (NRC), but 1.9 million were deemed ineligible, according to an official statement. A large chunk of those excluded were expected to be Muslims.

Shahibul Haque Shikdar, a Muslim college teacher, was distraught after two of his children made it to the list but he was left out.

“Even my father’s name is there in the final NRC but I have been left out,” the 39-year-old told AFP.

Assam has long seen large influxes from elsewhere, including under British colonial rule and around Bangladesh’s 1971 war of independence when millions fled into India.

For decades this has made Assam a hotbed of inter-religious and ethnic tensions. Sporadic violence has included the 1983 massacre of around 2,000 people.

Security was beefed up in Assam ahead of the release of the NRC, with some 20,000 extra personnel brought in and gatherings banned in some locations. There were no disturbances reported on Saturday however.

Anxious residents had started queueing up since early morning, braving rain and bad weather to check their names on the list.

Only those who can demonstrate they or their forebears were in India before 1971 could be included in the list.

But navigating the complex process is a huge challenge for many in a flood-prone poor region of high illiteracy where many lack documentation.

In January India’s lower house passed legislation that would grant citizenship to people who moved to India as recently as six years ago — as long as they are not Muslims.

This has stoked fears among India’s 170-million Muslim minority for their future.

EJECTION
Home Minister Amit Shah, Modi’s right-hand-man, has called for the ejection of “termites” and said before the BJP’s thumping re-election victory in May that it would “run a countrywide campaign to send back the infiltrators”.

Those left off the NRC have 120 days to appeal at special Foreigners Tribunals, which the government says are being expanded in number.

But activists say that tribunal members are often underqualified and are subject to “performance” targets, and that the process has been riddled with inconsistencies and errors.

Instances of people being declared foreigners because of clerical errors, such as differences in the spelling of names, are “appallingly common”, Amnesty International said Saturday.

Local lawmaker Ananta Kumar Malo, whose name was missing from the list, said he was appalled by the process.

“There are some problems with the system, otherwise how can they exclude my name?” he told AFP.

The number of mistakes and the fact that those left off the NRC were expected to include large numbers of Bengali-speaking Hindus has also turned some in the BJP against the process.

With many “genuine Indians” left off, the party is mulling a “fresh strategy on how we can drive out the illegal migrants”, said Himanta Biswa Sarma, a local BJP minister.

Those rejected by the tribunals who have exhausted all other legal avenues can be declared foreigners and — in theory — be placed in one of six detention centres with a view to possible deportation, although Bangladesh is yet to signal its cooperation.

Ten new such camps have been announced. One with space for 3,000 is being constructed in Goalpara, west of Assam’s biggest city Guwahati.

The camps currently hold 1,135 people, according to the state government, and have been operating for years.

Nur Mohammad, 65, spent almost 10 years in one such camp until a Supreme Court order saw him released this month.

“I was born here and lived in Assam all my life,” he told AFP this week. “I don’t know if my name will be in the NRC or not.”
Media reports say there have been more than 40 suicides caused by concern over the NRC.
Samujjal Bhattacharya from the All Assam Students’ Union (AASU), a key driver behind the NRC, said the register was necessary to protect Assam’s indigenous “sons of the soil”.
“We are not ready to live here like a second-class citizens in our own motherland,” he told AFP.