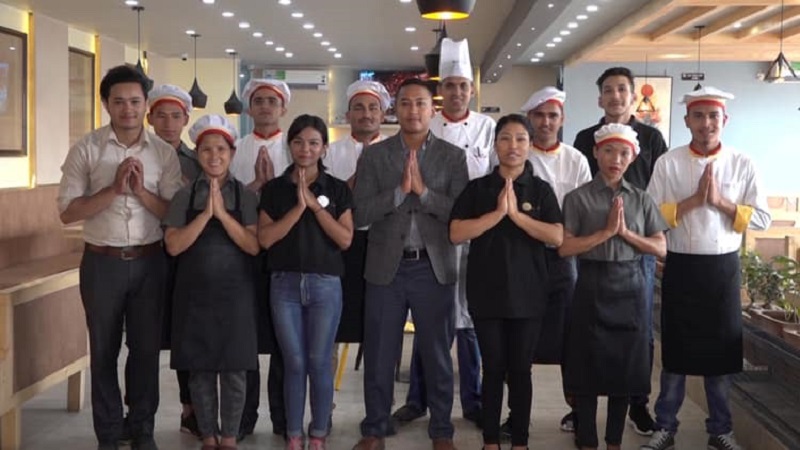 KATHMANDU: On a busy street in Nepal’s bustling capital Kathmandu, a new cafe is seeking to change the lives of trafficking survivors – one cappuccino at a time.

The Maiti Cafe is the first to be staffed by women who are either at risk of or have been rescued from slavery in Nepal, where thousands of people are trafficked every year, many to neighbouring India.

As well as helping them rebuild their lives, it aims to end the stigma that survivors often have to deal with in Nepal’s conservative, mainly Hindu society.

Among the new waitresses taking orders and serving the cafe’s signature steamed buns is Preeti – not her real name – whose family disowned her after she was rescued from a brothel in India, and who now wants to leave the past behind.

“I don’t want to look back at that dark part of my life,” Preeti, 26, told the Thomson Reuters Foundation. “I’m looking forward to building my skills and confidence in what I am doing now.”

Preeti is one of 11 women working as chefs, cashiers, baristas and waitresses and earning about 13,880 Nepali rupees ($120) a month, a modest but manageable wage in a country where one in five lives on less than $1.25 a day.

More than 23,000 people were trafficked in Nepal in 2016, according to the latest available data from the National Human Rights Commission, double the figure for the previous year.

Experts have attributed the rise to an earthquake in April 2015 that killed about 9,000 people and left many more homeless.

Traffickers lure victims, mostly from poor rural areas, with promises of good jobs, only to force them to work in fields or brick kilns, or as prostitutes or domestic workers.

The cafe is a social enterprise – a business that aims to do good as well as make a profit.

It was set up by local anti-trafficking charity Maiti Nepal with A’fno Nepal, an organisation that promotes social entrepreneurship, and Dutch organisation Free a Girl, which works to free victims of forced prostitution.

Many, like Preeti, are shunned by their families because daughters who left home with strangers are seen as a source of shame.

Customers seem to have no such reservations – since it opened on Aug. 3, Maiti Cafe has attracted up to 150 customers a day.

With its freshly brewed coffee, chicken sizzlers and steamed dumplings, the cafe has earned a nearly four-star rating on Google reviews, with scores of comments praising the service.

“It makes no difference to us what these women did in the past,” said Sunil Bhatta, a 22-year-old college student, as he dined at the cafe.

“They are well-mannered, polite and hard working. It’s good they are running the cafe and making a living for themselves.”

The cafe plans to increase the number of staff to 15 over the next year and Maiti Nepal’s chairman Bishwa Ram Khadka said the profits would be used to provide further training in sales, accounting and cooking.

“This is an example of how social and business enterprises can help underprivileged people sustain their lives financially and empower them,” he said.

Anti-trafficking activist Sunita Danuwar welcomed the initiative but said it was vital to ensure the women were protected from the risks of re-trafficking and reprisals from those who trafficked them originally.

“It is fraught with dangers … utmost care should be given to protect their identity and ensure their safety,” she said.

Despite months of training, Preeti said she and some of her new colleagues had been nervous about starting their new jobs, fearing customers might judge them.

She was the only member of staff willing to speak to the Thomson Reuters Foundation – the others declined, citing concerns for their safety.

Since she was rescued in 2005, Preeti has received vocational and skills training and gone back to school to make up for what she missed out on in childhood.

She spends her mornings studying before heading out for an eight-hour shift at the cafe, and views her new job as a vital stepping stone that could put her through college.

“Maybe in the future I will be able to have a cafe of my own,” she said.