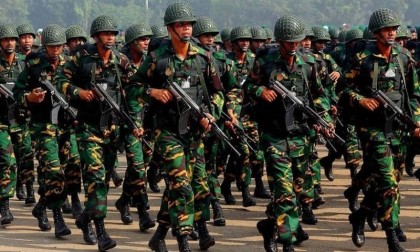 The Global Firepower’s 2019 Military Strength Ranking has named Bangladesh as the third most powerful military power in South Asia, after India, and Pakistan, Dhaka Tribune reported.

The country ranked 45th out of 137 countries reviewed for the ranking. It was ranked 56th in the previous index.

Maldives was not included in the index.

Bangladesh: Military strength at a glance

There are a total of 160,000 military personnel in Bangladesh.

In the land strength, the country has 340 combat tanks, 521 armored fighting vehicles, 18 self propelled artillery, 340 towed artillery, and 36 rocket projectors.

There are a total of 89 naval assets in Bangladesh, including six frigates and corvettes each, two submarines, 26 patrol vessels, and four mine warfare.

US army most powerful in the world

The United States has topped the list, followed by Russia, and China.

The other four countries among top eight nations are- India, France, Japan, South Korea, and the United Kingdom.