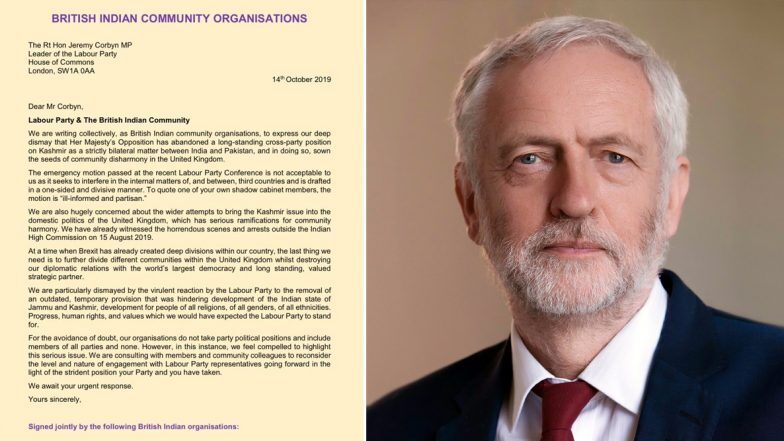 PTI , LONDON : Over 100 British-Indian professional and community organisations on Monday wrote to the UK Opposition Leader, Jeremy Corbyn, to condemn the Labour Party’s stance on Kashmir in the wake of the Indian government revoking the special status of Jammu and Kashmir.

The Labour Party on September 25 passed an emergency motion on Kashmir calling for party leader Corbyn to seek international observers to “enter” the region and demand the right of self-determination for its people, drawing criticism from the Indian diaspora representatives who described it as “ill conceived” and “misinformed”.

A cross-section of British-Indian bodies, including the Indian Professionals Forum (IPF), Indian National Students Association (INSA), Hindu Council UK as well as temple bodies and community representatives, added their name to a joint letter which accuses Corbyn of bringing an India-Pakistan bilateral affair into the domestic politics of the UK by adopting a “divisive” emergency motion that calls for international intervention in the region.

“We are writing collectively, as British-Indian community organisations, to express our deep dismay that Her Majesty’s Opposition has abandoned a long-standing cross-party position on Kashmir as a strictly bilateral matter between India and Pakistan, and in doing so, sown the seeds of community disharmony in the United Kingdom,” the letter notes.

“The emergency motion passed at the recent Labour Party Conference is not acceptable to us as it seeks to interfere in the internal matters of, and between, third countries and is drafted in a one-sided and divisive manner…We are also hugely concerned about the wider attempts to bring the Kashmir issue into the domestic politics of the United Kingdom, which has serious ramifications for community harmony,” it says.

Making a reference to the clashes outside the Indian High Commission in London on August 15 between Indian diaspora groups marking Indian Independence Day and members of Pakistani and separatist outfits, the letter warns against the politics of the sub-continent spilling over to a Brexit-hit UK to cause further divisions. It further declares that British-Indian organisations are holding consultations to reconsider their “level and nature of engagement” with Labour going forward.

“We are particularly dismayed by the virulent reaction by the Labour Party to the removal of an outdated, temporary provision that was hindering development of the Indian state of Jammu and Kashmir,” the letter adds, in reference to India’s abrogation of Article 370.

“This is huge and unprecedented. I cannot recall ever so many British Indian organisations writing in protest to a leader of a political party,” said Manoj Ladwa, CEO of UK-based media house India Inc and former Chair of Labour’s Indian Community Engagement Forum, who called for an urgent “course correction” in order to prevent the Labour Party losing its diaspora support base.

“There are over 1.5 million people of Indian origin in the UK, who like me have traditionally voted Labour. If Jeremy Corbyn doesn’t think he has a problem, then he certainly has a serious problem,” added the BJP supporter, as he warned that Labour’s perceived anti-India stance could spiral beyond its ongoing troubles with allegations of antisemitism within the party.

The letter follows weeks of face off between the UK’s Opposition and diaspora groups after the Labour Party passed what the Ministry of External Affairs (MEA) branded an “uninformed and unfounded” motion last month. The resolution, tabled by Pakistani-origin Labour MPs, called for international intervention in Kashmir and added: “Accept that Kashmir is a disputed territory and the people of Kashmir should be given the right of self-determination in accordance with UN resolutions.” Corbyn has since conceded that the language used had the scope of being misinterpreted, but has stood by the emergency motion.

“The emergency motion on Kashmir came through as part of the democratic process of the Labour Party Conference. However, there is a recognition that some of the language used within it could be misinterpreted as hostile to India and the Indian Diaspora,” Corbyn said in a reply to the Labour Friends of India (LFIN) group last week as he invited them for a meeting to further discuss the issue.

It came soon after the Indian Overseas Congress (IOC) UK chapter got embroiled in a controversy over the controversial resolution. Its members were pictured meeting Corbyn, who later took to Twitter to hail the “very productive” meet during which both sides discussed the human rights situation in Kashmir. While the BJP accused the opposition Congress of discussing India’s internal matters with foreign leaders, the IOC UK stressed that its delegation had met with Corbyn to “condemn” the Kashmir resolution passed at Labour Party annual conference.