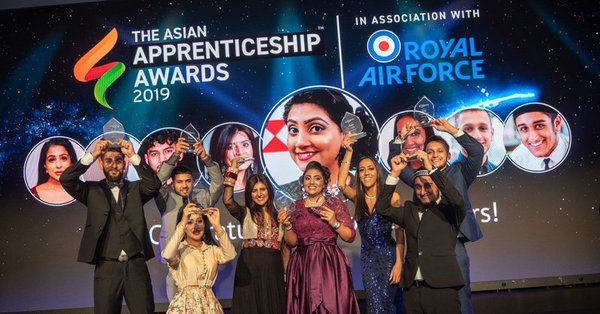 The awards recognise and celebrate talent within the British Asian community and the support they receive from their employers and learning providers.

Khaliqa works for HSBC UK Head Office in Birmingham as a Wealth Insights Proposition Manager, having completed her Apprenticeship in just eight months.

A British National who spent most of her life in Pakistan, Khaliqa achieved top grades for her GCSEs and A Levels. Her goal was to become a heart surgeon. Moving to the UK with the dream of studying medicine, she gained a place at medical school but then received the devastating news that she did not qualify for a tuition fee loan as she had not lived in the UK for three years.

Khaliqa was determined to build a successful career in the UK. She researched different industries and learnt about the apprenticeship programme with HSBC UK. The opportunity to study and work without incurring university debt appealed to Khaliqa and she gained a place on the Apprenticeship in Providing Financial Services.

Starting as a Cashier and Customer Service Officer at the Birmingham New Street branch, Khaliqa passed her apprenticeship exams with merit status within eight months, instead of the recommended 18 months. She was promoted on completion of the apprenticeship programme and has more recently been promoted again, this time to a management role. Her success in the workplace enabled her to buy her first home aged just 21, and to support her siblings and her mother.

Khaliqa is also an HSBC Apprenticeship Ambassador, delivering talks in schools and colleges, answering students’ queries so they can make informed decisions, and coaching students in interview skills. She is an extremely active member of HSBC Muslim Network and produced a video on ‘Ramadan and the workplace’ to help her colleagues understand the significance of the Holy month of Ramadan in Islamic culture.

Her line manager Christine Foyster said: “Khaliqa’s success at HSBC UK throughout and since her apprenticeship really speaks for itself. Two big promotions within less than two years is a rare occurrence at this organisation and is testament to the hard work Khaliqa has put into building her personal brand, proving her worth and growing a diverse and strong network of stakeholders throughout the business.

From over 300 nominations, awards were presented in 7 sector categories, 2 employer categories and the overall Learning Provider of the Year. Nearly 500 people attended the event which was hosted by Suzi Mann and comedian Eshaan Akbar. Entertainment was provided by Aston Performing Arts Academy. Guest speakers included Jasmine Kundra, from last year’s BBC The Apprentice line up and Iasha Masood from this year’s series, alongside the overall Asian Apprentice of the Year 2018 Marjana Uddin and Shakil Butt from the Chartered Institute of Personnel and Development.