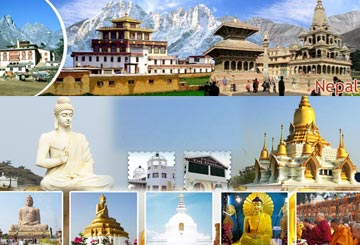 PTI —To attract religious tourists from various countries, including India, Nepal has undertaken several infrastructure development projects with the support of Asian Development Bank (ADB), according to officials.

The project implemented under the SASEC aimed at strengthening road, rail, and air links, as well as developing port infrastructure to match the needs of the regions–Bangladesh, Bhutan, India, Maldives, Myanmar, Nepal, and Sri Lanka.

As part of infrastructure development by ADB, an international airport near Lumbini, the birth place of Gautam Buddha, is expected to be operational by March next year.

Gautam Buddha International Airport, Bhairahawa, a place near Lumbini, is expected to attract tourists from Buddha circuit in India and other neighbouring countries like China, Sri Lanka, Bhutan and Japan.

More than five countries, including India, Sri Lanka, Thailand and Cambodia, have shown interest in starting airline operation from the upcoming airport.

Besides Lumbini, Bivah Panchami in Janakpur is a big attraction for many tourists from India, said Suraj Vaidya National Coordinator Visit Nepal 2020.

According to mythology, Lord Rama married Sita on Bivah Panchami in Janakpur. The festival is observed every year to mark the occasion.

“Both Uttar Pradesh and Nepal are trying to make Bivah Panchami a bigger affair. We are working with other states including Bihar on developing tourism potential which can be win-win for both the countries,” he said.

Despite Indian Airline hijack in 1999, Nepal remains one of the important destinations for Indian tourists. The latest number also indicates so.

As per the official data, as many as 11.73 lakh tourists visited Nepal last year. Of this, nearly 2 lakh were Indians and 69,640 from Sri Lanka and 26,355 from another neighbouring country Bangladesh.