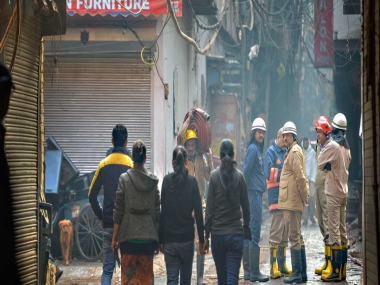 MUMBAI: At least forty-three people were killed in India’s capital New Delhi on Sunday when a fire swept through a six-storey factory where labourers were sleeping, government officials said, Reuters reported.

The factory was making handbags and lots of raw material was stored inside the building due to which the fire spread quickly, local media reported. However, no details were immediately available on the cause of the fire.

Most of the people who died were labourers who were sleeping at the factory in Anaj Mandi on Rani Jhansi Road when the fire broke out at 5 am.

Thirty fire trucks are at the site and have taken the situation under control. The fire is suspected to have started at the workshop of the bag manufacturing factory, NDTV writes.

Chief Minister Arvind Kejriwal has announced a compensation of Rs 10 lakh to families of those killed and additional assistance of one lakh to those who were injured. The government has also ordered a magisterial inquiry into the incident and sought a report within seven days. “The Anaj Mandi fire tragedy is a very sad incident. More than 40 people have died. I have ordered a magisterial inquiry into it. Compensation of Rs 10 lakh each will be given to families of those dead and Rs 1 lakh each to those injured. The expense of medical treatment of those injured will be borne by the government,” Mr Kejriwal said after visiting the site of the fire tragedy. The Delhi Police has registered a case against the owner of the factory and the case has been transferred to the crime branch for further investigation.

Revenue Minister Kailash Gahlot said that he has directed the district magistrate (central) to conduct an inquiry and submit a report within seven days.

The factory was operating in an area, whose narrow and congested lanes are lined with many small manufacturing and storage units.

“Most who’ve died were sleeping when the fire broke out and died due to asphyxiation,” Sadar Bazar’s assistant commissioner of police was quoted as saying by news agency AFP.