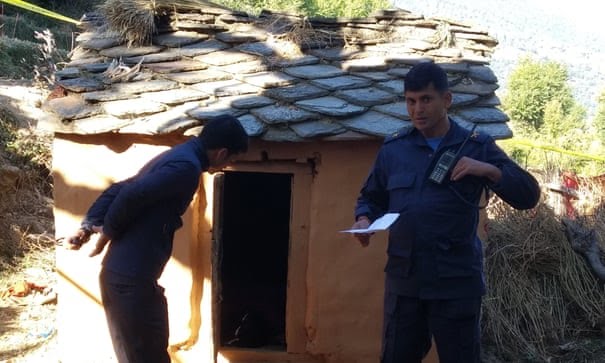 Kathmandu— The brother-in-law of a woman who died after she was banished to a “menstrual hut” in Nepal has been arrested.

Parbati Buda Rawat, 21, was found on Monday after she lit a fire to keep warm in a mud and stone hut and suffocated in the country’s western Achhan district.

According to the tradition, menstruating women are considered impure and must be separated from others in many aspects of life. Women are forbidden from entering the home or kitchen, or from touching other people, cattle, fruit or plants. Women practising the tradition may also have restricted access to water tapes and wells.

Opponents to chhaupadi recently began demolishing period huts to end the practice, but menstruating women have instead started to stay in makeshift tents.

It is feared she is the latest victim of the centuries-old “chhaupadi” custom that was outlawed in 2005. This is the country’s first arrest over the custom.

Achham’s chief district officer, Bhoj Raj Shrestha, said: “This is the first time we have arrested any person in connection with a death under the chhaupadi custom.”

It remains prevalent in Nepal’s remote west where some communities fear misfortune, such as a natural disaster, unless menstruating women and girls – seen as impure – are sent away to animal sheds or huts.

Police official Janak Shahi said Chhatra Rawat, 25, a brother-in-law of the dead woman, was arrested in the district capital, Mangalsen.

He will be questioned on whether he was responsible for sending her to the illegal hut.