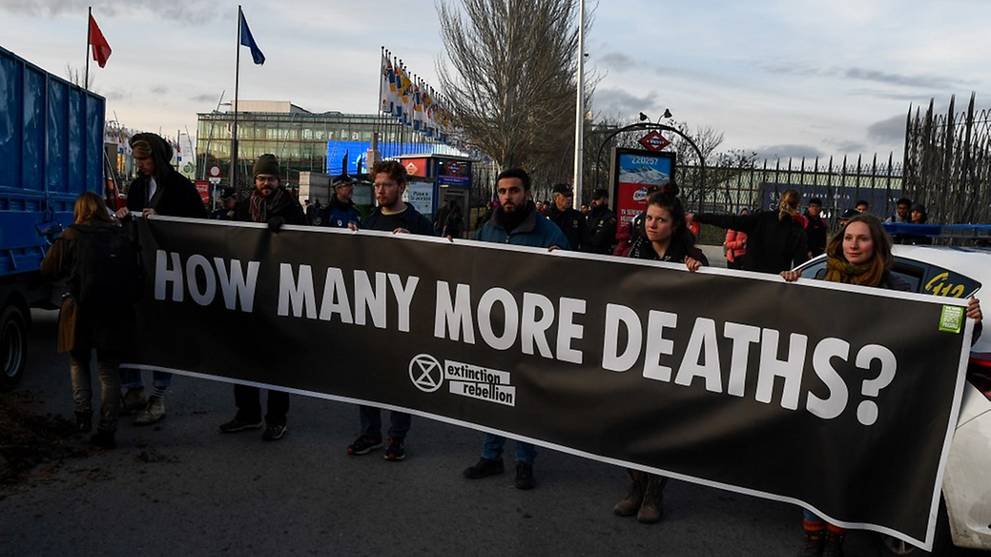 A major climate summit wrapped up in Madrid Sunday (Dec 15) with a compromise deal that left little to show, prompting UN Secretary-General Antonio Guterres to lament a “lost opportunity” to act.

Almost a fortnight of COP 25 talks just squeezed out hard-earned compromises from countries over a global warming battle plan that fell well short of what science says is needed to tackle the climate crisis, channel news Asia reported.

“I am disappointed with the results of COP 25,” Guterres said. “The international community lost an important opportunity to show increased ambition on mitigation, adaptation and finance to tackle the climate crisis.”

The summit’s final declaration “expresses the urgent need” for new carbon cutting commitments to close the gap between current emissions and the Paris treaty goal of capping temperature at below two degrees, host country Spain said.

“Today, the citizens of the world are asking for us to move ahead faster and better,” Carolina Schmidt, Chilean environment minister and President of COP 25, told the closing plenary.

But Tina Eonemto Stege, climate envoy for the Marshall Islands, denounced the response as inadequate for facing an existential threat of rising sea levels.

“Unfortunately, the new text we adopted this morning does not reflect anything near what we would have wanted. It is the bare minimum and we regret that countries could not agree on a more ambitious text,” Stege said.

Green youth activist Greta Thunberg – named 2019 Person of the Year by Time magazine – on Friday slammed world leaders for “still trying to run away from their responsibilities” while demanding a “year of action” in 2020.

Following a year of deadly extreme weather and weekly protests by millions of young people, Madrid negotiators were under pressure to send a clear signal that governments were willing to double down.

The summit – moved at the last minute from Chile due to unrest – at times teetered on the brink of collapse as rich polluters, emerging powerhouses and climate-vulnerable nations groped for common ground in the face of competing national interests.

“Based on the adopted text, there is a glimmer of hope that the heart of the Paris Agreement is still beating,” Mohamed Adow, Director of Power Shift, said.

“But its pulse is very weak.”

Negotiators from nearly 200 nations came to Spain’s capital with the aim of finalising the rulebook for the 2015 Paris accord, which enjoins nations to limit global temperature to below two degrees Celsius.

With the accord set to become operational next year, it had been hoped COP 25 would show the world that governments would be moved by protests, irrefutable science, and deadly storms and wildfires that marked 2019 to redouble their efforts.

But greater ambition – how far each country is willing to slash carbon emissions or assist less wealthy peers to do likewise – has largely failed to materialise, leaving some veteran observers aghast.

“Never have I seen such a disconnect between what the science requires and what the climate negotiations are delivering in terms of meaningful action,” said Alden Meyer, director of strategy and policy at the Union of Concerned Scientists and a 28-year veteran of the climate process.

“Most of the world’s biggest emitting countries are missing in action and resisting calls to raise their ambition.”

The push for strengthening voluntary carbon cutting plans is led by small-island and least-developed states, along with the European Union.

These have called out nations they see as blocking consensus – notably the United States, Australia and Saudi Arabia.

China and India, the world’s No. 1 and No. 4 carbon emitters, made it clear they see no need to improve on their current emissions reduction plans, which run to 2030.

These emerging giants chose instead to emphasise the historical responsibility of rich nations to lead the way and provide financing to poor countries.

“Major players who needed to deliver in Madrid did not live up to expectations,” said Laurence Tubiana, CEO of the European Climate Foundation and, as France’s top negotiator, a main architect of the Paris Agreement.

“But thanks to a progressive alliance of small island states, European, African and Latin American countries, we obtained the best possible outcome, against the will of big polluters.”

The summit was also meant to finalise a chapter on carbon markets in the Paris rulebook.

Instead, the focus now switches to next year’s COP 26 in Glasgow, when the true Paris deadline falls.

The US, which is leaving the Paris deal next year, was accused of playing spoiler on a number of issues.

“The US has not come here in good faith,” said Harjeet Singh, climate lead with charity ActionAid.

“They continue to block the world’s efforts to help people whose lives have been turned upside down by climate change.”

Even if all countries implement their current plans under Paris, Earth is on course to warm more than 3C by 2100.