New Year 2020 celebrations and fireworks around the world 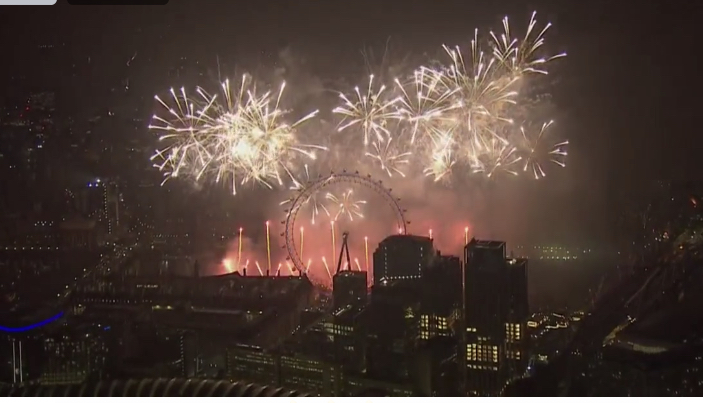 The UK and the world has welcomed 2020 in various style  firework displays heralding the start of a new decade.

Londoners watched a spectacular fireworks display from the banks of the River Thames that was launched from the London Eye and barges near Parliament.

The familiar chimes of London’s Big Ben clock tower rung in the new year, even though they have been silent for most of 2019 because of extensive restoration work.

To the north, the multi-day Hogmanay New Year’s celebrations in Edinburgh began Monday night with a torchlight parade through the streets of the Scottish capital.

Security was tight in both cities and elsewhere in Britain following a recent extremist attack on London Bridge that claimed two lives. Police arrested five men on suspicion of terrorism offenses Monday but said the arrests were not related to the London Bridge attack or to celebrations.

From Pyongyang to Singapore, Asia welcomed the new decade – some with festivities and fireworks; others with protests and slogans.

Millions partied the night away at New Year’s Eve countdowns or prepared for the new year with prayers and candles.

Fireworks burst and confetti fell as throngs of revelers cheered the start of 2020 in New York City’s Times Square.

In one of the globe’s most-watched New Year’s Eve spectacles, the crowd counted down the last seconds of 2019 as a luminescent crystal ball descended down a pole.

About 1,360kg of confetti showered the sea of attendees, many of whom were also briefly rained on earlier in the evening as they waited in security pens for performances by stars including rap-pop star Post Malone, K-pop group BTS, country singer Sam Hunt and singer-songwriter Alanis Morissette.

The crowds packed into the heart of Manhattan mouthed lyrics and waved yellow and purple balloons in a frenzy as midnight approached.

The fun was evident, but some important global issues were driven home as well.

Australia ushered in the New Year with a huge fireworks display in Sydney, despite the calls to cancel the event as devastating bushfires raged across the country.

A petition to cancel the event out of respect for fire victims attracted more than 280,000 signatures. Fireworks displays were scrapped in Australia’s capital, Canberra, and Sydney’s western suburbs due to elevated fire danger and extreme weather conditions.

Critics had wanted Sydney to use the Aus $6.5 million ($4.5 million) spent on the display to fight bushfires ringing the city, but officials said the event was worth Aus $130 million to the economy and cancelling it would not have helped those impacted by the fires.

More than 100,000 fireworks lit up the skyline for the hundreds of thousands of spectators thronging the city centre.

The year began in spectacular style in the United Arab Emirates, which used some 190 drones to set off fireworks in Ras al Khaimah. The small emirate also tried to break the world record for the longest fireworks waterfall, with a display some four kilometres long, according to local media.

Thousands of Indians gathered in front of the iconic Gateway of India in Mumbai for the annual fireworks.

Meanwhile, however, thousands ushered in the year by demonstrating against a citizenship law they say will discriminate against Muslims and chip away at India’s secular constitution.

Demonstrations were planned in New Delhi, in the grip of its second coldest winter in more than a century, as well as Mumbai and other cities, despite Prime Minister Narendra Modi’s attempts to dampen demonstrations that have run for nearly three weeks.