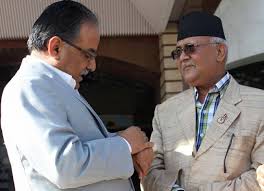 Three events witnessed by me recently have come to dominate the political landscape in Nepal: A new power-sharing deal between ailing Prime Minister KP Oli and co-chairman of the Nepal Communist Party (NCP) Pushpa Kamal Dahal, also known as Prachanda; flare-up of the Kalapani territorial dispute between India and Nepal; and the holding of elections to 52 vacant posts in Kathmandu, the first political test after the NCP swept the three-tier polls in 2017-18. The most sensational development, however, was the obituary pasted over the much-touted gentleman’s agreement between Oli and Dahal. According to the latter, both had agreed to share prime ministership for two-and-half years each. On an official visit to New Delhi in 2018, Dahal had publicly affirmed the deal. Oli had then sought an explanation from Dahal.

Suddenly last month, Nepal woke up to President Bidhya Devi Bhandari brokering a new deal (which is no deal). According to it, Oli, while continuing to be the Prime Minister till termination of the present House, would elevate Dahal as the executive chairman of the party. The intended separation of office and power, however, could not be achieved. Oli told Kantipur Television twice in an interview: “Not only am I the other executive chairman but also senior to Dahal… we both will chair party meetings but I am the senior chair and he is the other chair.”

The power struggle has been resolved to Oli’s advantage with the former civil war time hero Prachanda conceding the battle, not the campaign. Oli has positioned the Damocles’ sword over Dahal for war-time excesses, which is to be investigated by the Truth and Reconciliation Commission (TRC). Dahal’s confidant, Speaker KB Mahara, has landed in jail over an alleged case of rape. Grapevine suggests he was framed. Mahara has served as the Deputy Prime Minister three times and has been a Minister in every coalition Government, which Maoists had joined/formed. Prachanda is now an emperor without clothes whom Oli is able to bully as the junior but is an unyielding partner.

Kalapani catapulted into the headlines the moment India published its new map on November 2, following the Jammu and Kashmir Reorganisation Act, 2019, that showed Pakistan-occupied Kashmir (PoK) as a part of the newly created Union Territory of Jammu & Kashmir while Gilgit-Baltistan and Aksai Chin figured in the Union Territory of Ladakh. It also showed Kalapani and Susta, both unsettled disputes, as part of India, prompting Kathmandu to ask, “Why were they shown in India when they are disputed areas?” On December 13, Minister for Land Management and Cooperatives Padma Kumari Aryal said Nepal would release its own map, showing Limpiya Dhura as the source of Kali river. At the heart of the dispute is the origin of Kali river along the western boundary of Nepal. Nepal claims it originates in  Limpiya Dhura while India says it is at Kalapani, where it maintains a military post. Every few years, the Kalapani dispute is revived but this time Kathmandu won’t let it go. It is time to get real about the dispute, especially at a time when India’s popularity has been plummeting.

Oli carried out the much-awaited Cabinet reshuffle, which turned out to be a storm in a teacup. Though new Ministers were inducted, three senior and three junior Ministers were dropped. The evergreen Madhesi leader, Upendra Yadav of the Samajwadi Party Nepal (SPN, which has changed names more frequently than change in seasons), whose portfolio was changed from health to law and justice while he was in New Delhi attending a conference, made some noises but quietly accepted the alteration.

With 17 seats in the House, Yadav’s party has many talented leaders, including former Prime Minister Baburam Bhattarai. This provides Oli the silver bullet of a two-third majority, with which, the Madhesis hope, he will alter the Constitution and meet their residual demands. India, too, has been pressing for the same for quite some time now. Prachanda is more amenable towards settling Madhesi grievances. The only real Madhesi party left is the Rastriya Janata Party (RJP), which in coalition with SPN and NCP, rules the only Madhesi Number 2 province. The tamed CK Raut is leading the fledgling Janmat Party, which espouses Ek Madhes Hamro Desh. The RJP has 16 lawmakers in Kathmandu and at one time, it was supporting the Government till it fell out as it kept dragging its feet on the second Constitutional amendment.

The recent by-elections to fill 52 vacant posts for different offices did not move the needle significantly in any one party’s favour except that the only federal seat contested was bagged by NCP in Pokhara. It also took 50 per cent of the lower level posts but Nepali Congress (NC) defeating NCP in three of its strongholds in Dharan, Chitwan and Bhaktapur was a feather in its cap. There is no big swing in voteshare either way. Both parties are introspecting even as they are internally divided. This is the first election the NCP has fought as a merged entity (UML and Maoist party); whereas in 2017-18 it contested elections separately. Unfortunately, the two new parties, Bibeksheel Party and Sajha Party, made an impressive showing but could not win any seat.

Kathmandu may, therefore, have a Government completing its full term on March 18, 2023. Oli’s health, a cause of concern, is the only contingency when leadership change can occur, which can happen any time soon. The successor Prime Minister will surely emerge from the NCP. The lawmaker numbers are stacked in favour of the Oli faction (121) against Prachanda Maoists (53) in a House of 275 members. The NCP’s general convention has not been held, nor have the two parties amalgamated at the grassroot level. As has happened before — though this time it’s less likely — Prachanda can jump ship if he is not offered the top job or at least the power-sharing deal is not  revived for the remaining three years in case of leadership change. Crossing the rubicon and re-joining NC will take the House tally to 116 (NC 63 and Maoists 53). With obliging hands from RJP (17) and SPN (16), the coalition will reach 150 lawmakers, crossing the halfway mark of 138. Oli fears Prachanda can dislodge him but he has said no power on earth can prevent the NCP from completing its full-term. Only Prachanda can change that. Oli’s physical incapacity to be the Prime Minister will be the inflection point in Nepalese politics.

Meanwhile, Kathmandu was momentarily rocked by former King Gyanendra’s impromptu jiving; twirling his jacket at the famous pub, Lord of Drinks, where he danced the night away with his family, applauded by an enamoured house. This single earthly act of his is unlikely to restore divine  monarchy. India’s Kalapani woes could grow given the mushrooming price of onions imported from here. Prices recorded a 318 per cent increase in three months. Lord Pashupatinath’s forecast for 2020 is a less stable Nepal.

This article was originally published on “The Pioneer.”