Nepal’s Prince is in 14th position in world ranking 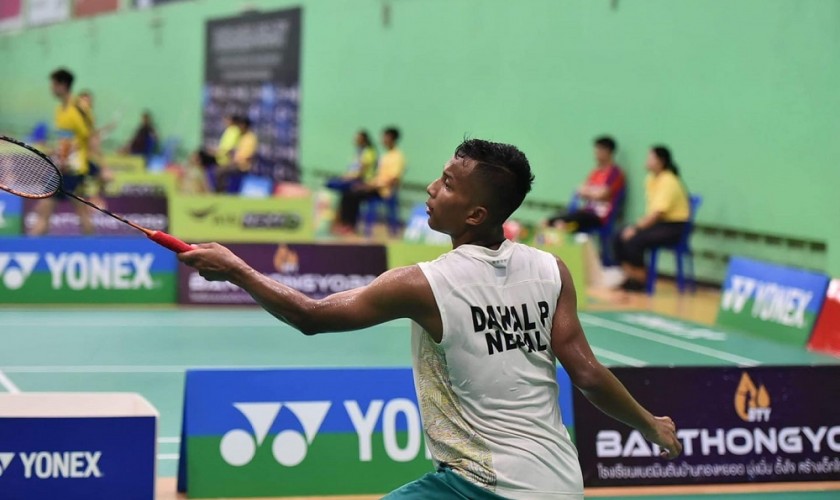 London — Junior badminton player Prince Dahal from Nepal is in the 14th position in the world ranking of badminton players announced by the World Badminton Federation today.

Prince has improved in the ranking climbing four notches to 14th position from the 18th. This is the highest position any Nepali badminton player has achieved so far. Before this he was in the 32nd place.

Dahal  had recently won the title of the Dubai International Series held in the United Arab Emirates last September.

He has been performing well  in many international competitions.

France’s Christo Popov is in the top position in the WBF junior world rankings.

Dahal started playing badminton from as early as five. He draws inspiration from his father who played badminton with his friends every day in their hometown, Kalanga, in Darchula. “My father is someone I look up to a lot and still do actually. He is why I am a badminton player. He is who taught techniques and is probably the best coach I’ve had,” adds Dahal who says he played in a lot of local tournaments in his home town of Kalanga.

By the time Dahal was nine he had shown his parents he had the talent, but his parents knew that he didn’t have a chance to make it big in Darchula which is why they brought him to Kathmandu.

“All I wanted back then, and even now, is to play this sport. A reason why I told my parents that I would only study in a school which has a badminton court,” adds Dahal on an interview with Onlinekhabar, who in 2013 was admitted to Nepal Police School in Bhaktapur.

Dahal adds that he learnt a lot in school. He shares that the school had a better badminton facility and better coaches where he could refine his skills. Just a year after coming to Kathmandu, Dahal then took part in various age-level tournaments across the valley winning both the U-14 and U-16. However, he missed out on the U-19 title which he shares added fuel to his fire to become a great badminton player Nepal has ever seen.

“When you lose, you want to do better. You want to beat that person the next time you play. That tournament was alright for me but I wanted to more. Win more.”

Having won the first tournament he played in Kathmandu made Dahal’s confidence grew. That is why he started to compete in the open category at only 14.

“My father said I could excel in the open category and said that I was ready to play against the country’s best players,” he adds. His father’s prediction came true during the 2017 Krishna Mohan National Open Championships in which 14-year-old Dahal won a bronze medal beating one of Nepal’s best badminton players, Bishnu Katwal.

“Playing against such senior players has made me a better player. That tournament was a result of me and my father’s hard work. I still get goosebumps when I remember that tournament.”

Dahal says having played against such players has helped him in age level tournaments. But he knew that for him to get better, he had to train more which is why he took a two-year break from studies to focus on badminton.

“Out of the two years, I spent one year at the Banthongyord Badminton School in Thailand and the other I was here in Kathmandu preparing myself for Dubai International,” he shares adding that the decision to skip school wasn’t easy but it was one which had to be taken.

Nepal’s Prince Dahal holds the trophy after the Dubai Junior International Badminton Series on Sunday, September15, 2019.He adds it wouldn’t have been possible without his father who convinced his mother that it was the right things to do. “My mother didn’t want me to skip school. But my father understood. He knew that if I was to become a great badminton player I needed to sacrifice a few things. Looking back at the decision, to skip school wasn’t a bad one. Everyone is happy now,” he adds.