Child ‘love marriages’ in Nepal damaging the future of many youths 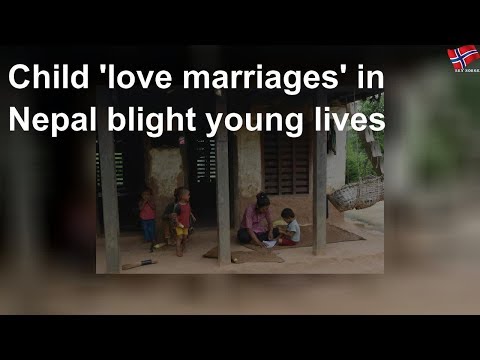 AFP —Asha Charti Karki (C), who got married at age 16, mentors young girls on the importance of education in a bid to tackle the growing numbers of teenagers who are marrying young by choice

SURKHET (NEPAL) – Teenager Asha Charti Karki told her parents she was going out to study, but instead she ran off to wed her boyfriend — one of a growing number of Nepali teenagers who are marrying young by choice.

“There were rumours about us in the village and I had fights at home. I felt I had no choice but to run away,” Karki told AFP at her home in the western district of Surkhet.

Nepal has one of the world’s highest rates of child marriage even though the practice was banned five decades ago and the legal marrying age is 20.

Some 50 percent of Nepali women aged between 25 to 49 were married by their 18th birthday, according the Himalayan nation’s 2016 Demographic Health Survey.

Marriages in the conservative country were traditionally were arranged by parents, with many forcing their children to marry for cultural reasons or out of poverty.

Such marriages are declining but child rights activists warn an increasing number of underage couples are eloping for “love marriage” — a term used to describe unions by choice.

A 2014 survey by Girls Not Brides Nepal, which is part of a global network set up to end child marriage, found that one-third of such unions were initiated by young couples, and that the trend was increasing.

“This practice is posing a challenge for us and for the government. We can tell the parents but it is hard to convince young boys and girls when they marry by choice,” Anand Tamang of Girls Not Brides Nepal told AFP.

Girls in particular lose the support of their families when they elope, he added.

Karki was among those who quit school early after getting married, as she struggled to cope with household chores and family responsibilities.

Soon after, she found out she was pregnant.

“I was only 16, too young to understand what I was getting into,” she said, cradling her two-year-old daughter.

“I had lied to my parents and run away, but I was actually betraying myself and my future.”

Her early pregnancy left her with uterine prolapse, a painful condition which sees the uterus or womb descend and protrude out of the vagina.

“It is difficult. I often see my friends and wonder where I would be if I had not married,” she added.

While the Nepali government has implemented a national strategy to end child marriages — punishable by jail terms and a fine — by 2030, it acknowledges the programme can only be successful if the roots of the problem are tackled.

Some girls elope to avoid a potential forced marriage, or to escape poverty or chores at home.

With teen romances seen as socially unacceptable in much of rural Nepal, young couples feel they have to run away and get married to legitimise their relationships. Others feel pushed to marry if they fall pregnant.

Meanwhile, underage love marriages are rarely reported to authorities, with families only seeking legal recourse if they disapprove of unions such as inter-caste marriages.

“(The) main (thing) is education. It is important that they understand that being sexually active does not equate to marriage,” Krishna Prasad Bhusal of the Ministry of Women, Children and Senior Citizens told AFP.

Karki hopes she can help other girls by sharing her experiences with them as part of a programme called Sisters for Sisters’ Education run by British charity VSO Nepal.

In her role as “big sister”, Karki persuaded 17-year-old Aradhana Nepal to leave her abusive marriage and return to school.

Nepal was only 13 when she eloped with a boy she barely knew. There had been gossip about them and she didn’t know what else to do to protect her reputation.

It was only after they married that she discovered he was a violent drug addict. She endured beatings for months before she escaped.

She recalled: “It was a mistake. Leaving that marriage saved my life.”