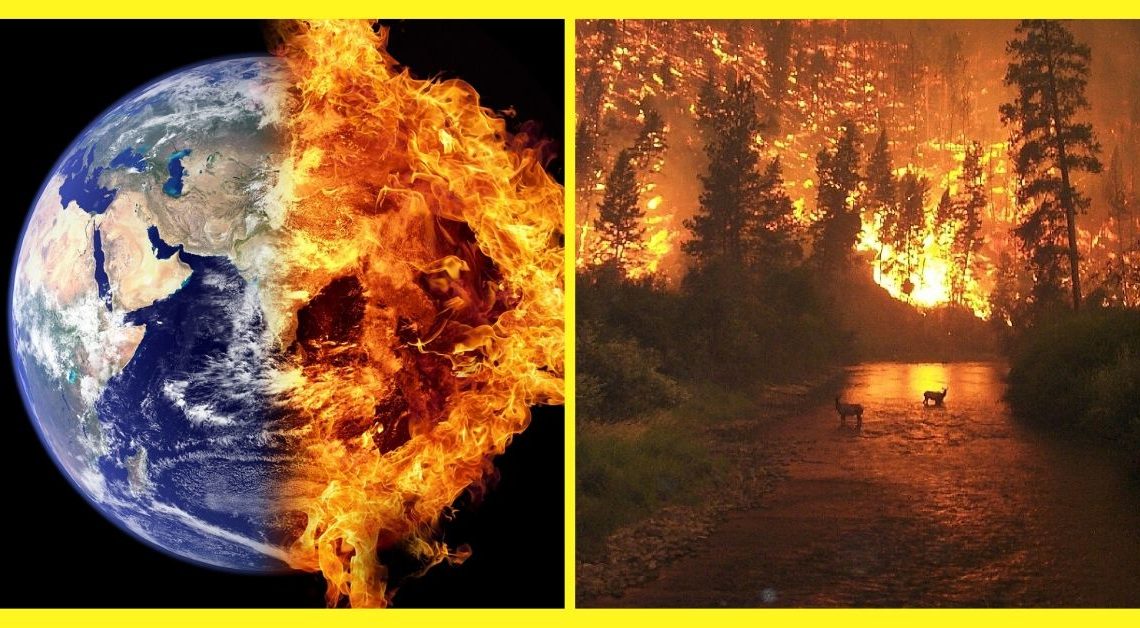 The crave for material development has led industrialized nations to overturn natural laws, casing Climate change to turn into a frightening tragedy, showing rebellion in every corner of the world. Whether it’s the dreaded wild fires in the Amazon jungle, the burning of forests in California, the recent bushfires in Australia, and the floods in Europe, Britain, Italy, Greece, are all examples of inclement monsoon rains, massive hit webs, extreme snowstorms, droughts, tsunamis, thunderstorms of many names, flooding glaciers,

The heartbreaking news of the horrific effects of the sea fish and aquatic creatures, such as the plastic in the stomach of both whales and wild deer’s, are now being covered in mainstream media and social networks. One of the reasons we neglect the people and these extreme measures is down to an unspoken rule of our unconscious silence and disregard. Nature is trying to warn us by these natural disasters in the hope it will scare our generation to change and beg for redemption.

Dr Joëlle Gergis is an award-winning climate scientist and writer based at the Australian National University writes the article in Britain leading magazine the Guardian entitled “We are seeing the very worst of our scientific predictions come to pass in these bushfires.”

The world’s first global conference on climate change adaptation was held in Australia on the Gold Coast in 2010. This conference was run by the former National Climate Change Adaptation Research Facility (NCARF), which lost its state funding in June 2018. It was a visionary initiative to attempt to help the highly susceptible nation in the developed world prepare for climate change. Despite this immensely important task, the effort is now vastly scaled-down and operating through Griffith University by a handful of dedicated researchers. How anyone thought that cutting funding to the only dedicated national climate change adaptation program in the country was a good idea is entirely beyond me.

In Australia, fires have destroyed an area of land almost twice the size of Belgium. To date, 23 people have sadly lost their lives due to the wildfires raging across the country since September, with dozens more missing. 1,500 homes have been lost in the fires.

Killer fires are continuing to ravage Australia with people fleeing New South Wales where a week-long state of emergency is in force. On January 2 it was declared that the state of New South Wales confirmed a week-long state of emergency as high temperatures and strong winds are set for the following few days, driving the deadly blazes. On January 3 as around 1,000 people in Mallacoota, Victoria, who were sheltering on beaches, were ferried to the town of Western Port. Creating a plume of smoke more full than Europe and killing almost half a billion animals with scientists could have been wiped out. The flames are creating their own dangerous weather systems forming ‘Fire clouds’ that spark lighting and ignite new blazes there’s little respite on the horizon. 430C temperature and fierce winds are forced to stoke the fires this weekend, and there are three more months of summer left. In December, Australia had its two hottest day ever, hitting 41.90C on average while 2019 was the country’s driest and hottest year on record 1.5 0C above the long-term average.

Climate change caused by GHG emissions is making extreme weather more frequent and intense. Australia is among the world’s most significant exports of coal, and the UN says Australia is not on track to meet Paris Agreement goal to cut emissions by 26% along with half the G20 countries.

In more devastating news, it was revealed 30 per cent of koala habitat had been destroyed, and experts warned the marsupials could become extinct. On the same day, two volunteer fire-fighters were tragically killed after a tree fell on their vehicle.On December 19, five hero fire-fighters were injured when their tanker was overrun by fire. On December 11, the Rural Fire Service confirmed that 724 homes, 49 facilities and 1582 outbuildings had been damaged in NSW. Failing to adequately plan for the known threat of climate change in a country like Australia should now be thought to be an act of treason.

This summer has been a harsh reminder that no matter how much we want to avoid addressing the dilemma of climate change, it simply can no longer be overlooked.  As this summer has shown, it is now part of every Australian’s lived experience. Dr Joëlle Gergis explained.

Now is the time for our political leaders to make a choice about which side of history they want to be on. There is much work to be done, and we are fast running out of time.

Her Majesty, The Queen Elizabeth, has sent a message of condolence to the Governor General of Australia, Governor of New South Wales, Governor of Queensland, and Governor of Victoria and to all Australians: “I have been deeply saddened to hear of the continued bushfires and their devastating impact across many parts of Australia.

My thanks go out to the emergency services, and those who put their own lives in danger to help communities in need. Prince Philip and I send our thoughts and prayers to all Australians at this challenging time.”

This natural calamity is also a political crisis. The fires are a clear signal of the global issues of climate change, which can make ecological conditions more appropriate to the eruption and escalation of wildfires. Climate change has been a divisive topic in Australia for years, a wedge issue that has decided elections. In the past, Prime Minister Scott Morrison has downplayed the significance of tackling climate change and has offered full-throated support for coal mining. The fires have created the biggest test of that position, and of Morrison’s leadership since his conservatives unexpectedly won a general election in May.

Already, the wreckage has fueled calls for Morrison — who once brandished a lump of coal in parliament to underline his support for mining — to take more rigorous action on climate change. Australia’s share of global CO2 emissions from domestic use of fossil fuels is about 1.4 %, according to Climate Analytics, but the country is one of the most significant emitters per capita. Australia’s deadliest wildfire disaster was in February 2009, when 173 people were killed.

Although global greenhouse gas emissions (0.6%) have a minor role, Nepal is one of the world’s weakest terrain at risk of climate change, fourth in the global index of global natural disaster probability, 8th in earthquake and 8th in flood.

Nepal is situated between two colossal neighbours, who consume half of the world’s energy and emits the carbon dioxide in the same way.  The world’s carbon footprint emitted by China is 9.9% while India’s is 8.5%. There influence has been imprinted on the beautiful lives of our people and their home, the high mountains. Part of the mess that dominating counties cause with their greed is what small underdeveloped countries, like Nepal, have to deal with.

What more can countries like Nepal do to deal with extreme weather, such kind of emergency and reduce emissions?

(Poudyal is a PhD scholar at Swansea University, UK and researching on renewable energy, energy conservation and energy efficiency improvement.)