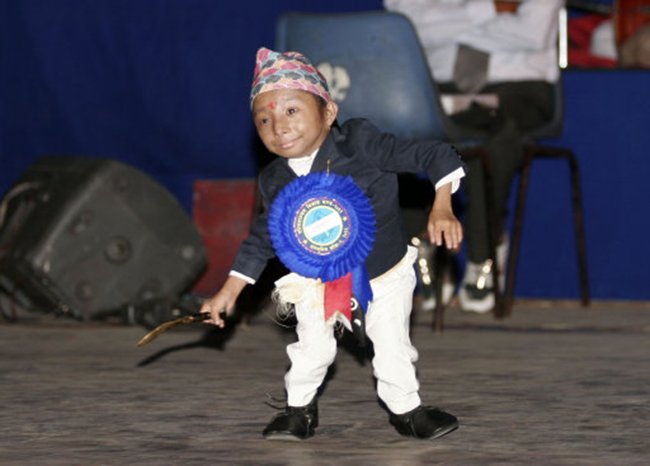 “Khagendra was admitted at the Manipal Teaching hospital in Pokhara for treatment of pneumonia and heart related ailments on Thursday but passed away on Friday,” Min Bahadur Rana, President of the Khagendra Thapa Magar Foundation told www.nepallive.com– a Kathmandu-based news portal.

Born on 14 October 1992, Thapa was officially measured at Fewa City Hospital in Pohkara, Nepal, on his 18th birthday in 2010. ⁣

GWR recognises two categories for people of short stature – mobile and non-mobile – and Mr Magar’s height made him the shortest living mobile man on the planet.

Khagendra was born in Baglung district of Nepal, the eldest son of Roop Bahadur and Dhan Maya. His father recalled, “He was so tiny when he was born that he could fit in the palm of your hand, and it was very hard to bathe him because he was so small.”

He first came to the attention of Guinness World Records in early 2010, when he was measured by Records Manager Marco Frigatti on the GWR Italian TV show Lo Show dei Record and confirmed to be the shortest teenager (male) living.

He made his first appearance in the GWR 2011 book, alongside Jyoti Amge, the shortest teenager (female) living.

On reaching 18 years and qualifying for the adult record, Khagendra took the title from Edward “Niño” Hernandez of Colombia, a reggaeton DJ who stands 70.21 cm (2 ft 3.46 in).

Khagendra quickly caught the public’s imagination, and in 2011, he was appointed as a Nepalese Goodwill Ambassador for Tourism.

Guinness World Records last caught up with Khagendra in December 2018 to document a day in his life, including time spent at his family’s shop, leisure activities such as playing guitar and travelling around his home town on a motorbike with his brother.

Craig Glenday, GWR Editor-in-Chief, who first met Khagendra during his visit to Italy in 2010, said: “We’re terribly sad to hear the news from Nepal that Khagendra is no longer with us. His bright smile was so infectious that he melted the hearts of anyone who met him. As many people of short stature experience, life can be challenging when you weigh just 6 kg and you don’t fit into world built for the average person. But Khagendra certainly didn’t let his small size stop him from getting the most out of life. It’s been an honour to know him and his family, and a privilege to share his story with the world.”